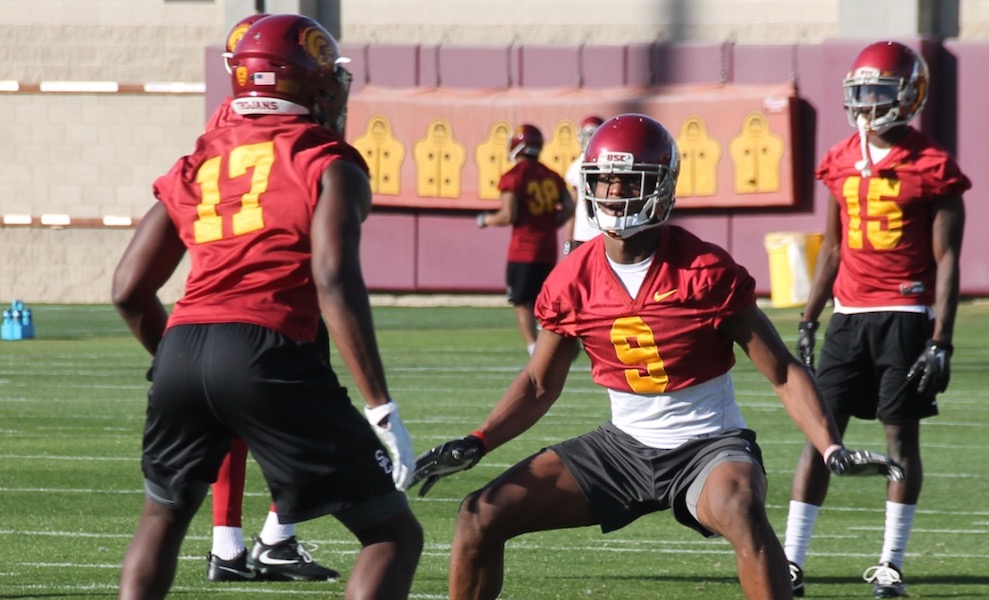 The Trojans will return to the practice field on Tuesday, refreshed and ready to go after spring break, and set for the next four weeks of what Clay Helton says will be a “hard camp” for the rest of the way, and I certainly look forward to seeing how that transpires.

I’ll also be watching the spring journeys for some players who are looking for bigger roles, ranging from a senior like RB Aca’Cedric Ware to a redshirt freshman like Isaiah Pola-Mao.

Ware returns as the most experienced back for the Trojans but that’s not saying much with only 139 carries in his career (averaging a solid 4.9 per rush) while always sharing time in a crowded backfield that included his fellow Texas Ronald Jones, who is off to the NFL now. And with talented freshman Stephen Carr sitting out spring after recent back surgery, and Vavae Malepeai out with a hamstring issue, the time is now for Ware to establish himself as much as possible while he is getting the bulk of the carries. He looked good in the first week of spring.

I was hoping Randal Grimes (photo above) would come out for spring looking solid after an off-season spent in the Trojan weight room and he was definitely one of the guys who caught my eye on the first day. For what it’s worth, the roster still lists him at 6-4, 205 (same as last fall). I see Randal as the favorite right now for the #3 receiver role and that could mean plenty of catches for the talented sophomore from Las Vegas.

I would like to see Erik Krommenhoek continue to climb to the 260 range with the hope that he could offer more of a power blocking option from the tight end spot. He’s not in that range yet but with Daniel Imatorbhebhe out he will get a fresh slate with new tight end coach Keary Colbert, who certainly appreciated the fine art of blocking as a player.

There is an opening for a first offensive guard off the bench and Alijah Vera-Tucker has a shot to step up and grab it. Alijah spent the first week as the top reserve at RG behind Andrew Vorhees, and there’s no saying that if he plays well enough he could also be used ahead of Jordan Austin if anything happens to Chris Brown. Austin got the nod at RG when Vorhees was hurt in the Pac-12 title game and he is the veteran but Vera-Tucker has a lot of talent. This one will be interesting to watch.

Caleb Tremblay is a newcomer this spring as a junior college transfer and he looks like he could be an important part of the interior defensive line. Yes, it hurt to lose Rasheem Green early to the draft but when you look at the trio of guys in line to replace him (Christian Rector, Tremblay and Jay Tufele) you realize there is a lot of talent in that group. And with junior college players you never know if they are going to show up as advertised but Tremblay did, this is a big guy who can move.

Somebody needs to get Levi Jones on the field, and quick. There is so much athleticism to his game and you figure it’s only a matter of time before he starts to make a real impact. So far he’s been lining up behind John Houston at WLB in spring.

Isaiah Pola-Mao spent last fall on the injury list after trying to take on Ronald Jones during a Coliseum scrimmage last fall. But Clancy Pendergast praised him during the first week for showing up in spring knowing his playbook, a sure sign that Isaiah had been paying attention and learning during his time on the sideline. Now he faces a deep group that is trying to angle for playing time with only Marvell Tell set in a starting role.