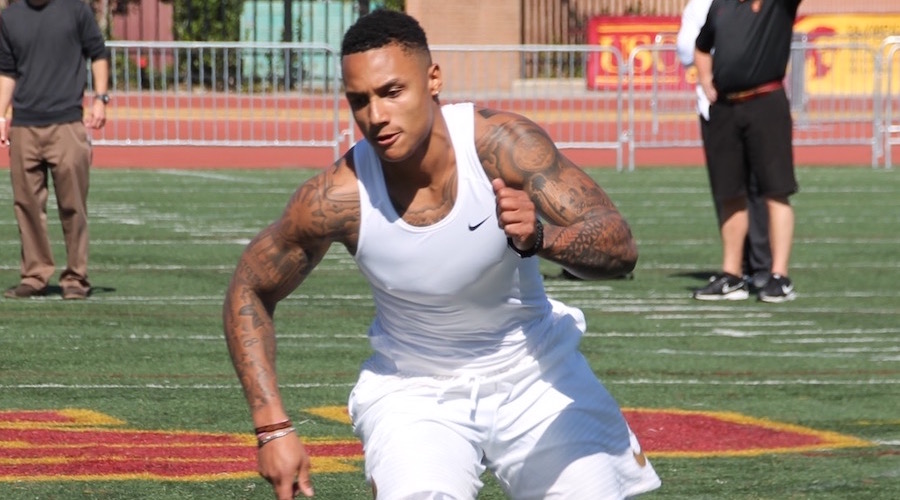 The NFL draft starts on Thursday and it’s unclear at this point if a Trojan will be chosen in the first round.

Su’a Cravens offers the best chance for the 80th first round choice in USC history as there are rumors this week that Cravens, long projected as a second round selection in most mock drafts, could inch his way up on draft day.

It wouldn’t be a surprise to USC fans to see Cravens (photo above) goes in the first round after watching him play football for three years. There may be some who want to overthink it by wondering if he is a tweener, while the most important thing is that he’s a football player. Even if he doesn’t go in the first round, Su’a doesn’t figure to last long in the second round after the recent early success of tweeners Shaq Thompson and Deone Bucannon.

It’s somewhat difficult to project which team Su’a will land with because he chose not to conduct any private workouts for teams leading up to the draft. It was an interesting decision by Su’a and his agent but they chose to let his film speak for itself, and if he goes early in the draft it will be a move that paid off.

There are a trio of Trojans who could be the next player selected between Max Tuerk, Kevon Seymour and Cody Kessler, and it’s real unclear about which rounds they may go.

Most of the recent mock drafts have Tuerk being the next pick off the board. In Max’s favor is a long history of productive and versatile play on the field, and the fact that he could play either guard or center is a big plus in his favor. The primary question for Tuerk is obviously the status of his knee after surgery last fall, as he wasn’t able to do the testing drills as part of the draft process, but there haven’t been any red flags in his recovery either and that will likely lead to comfort in someone taking him sooner rather than later.

No Trojan helped himself more in the draft process than Seymour by running a sizzling 4.39 40 time at the combine. Seymour wasn’t a hot prospect on many draft lists prior to that after a disappointing senior season but a lot of teams began taking a second look after the combine and what they found was a guy with a lot of ability and measurables, even if the production didn’t always match. I don’t think things clicked for Kevon with the previous coaches so a fresh start could prove beneficial.

On the flip side, Kessler was being touted at this point last year as a potential Heisman candidate and early draft pick, but now it’s looking like a probable day 3 selection. While Cody offers a solid resume filled with plenty of stats, there are a lot of other QB’s who fit the physical NFL profile a little better. One team to keep an eye on for Cody is the Dallas Cowboys, who had a chance to coach him during the Senior Bowl and came away impressed.

Of the remaining Trojans, Antwaun Woods is the next most likely to get selected, although it’s unlikely that his fellow d-linemen Delvon Simmons and Claude Pelon get picked. It wouldn’t surprise me at all, however, if all three of them are on NFL rosters next fall as they have the talent, it’s just a question of how much they were developed over the past two years.

Tre Madden and Soma Vainuku might get picked but it’s looking more and more like free agency at this point. I could also see both of these guys in the league for several years. With Madden, it’s simply a matter of health, if he is ready to go he is an NFL-type back, no question. With Soma, the fact that he could potentially contribute at fullback, linebacker and special teams is going to help him. Soma was the most underused Trojan since Jordan Cameron, who is now entering his 6th year in the league.