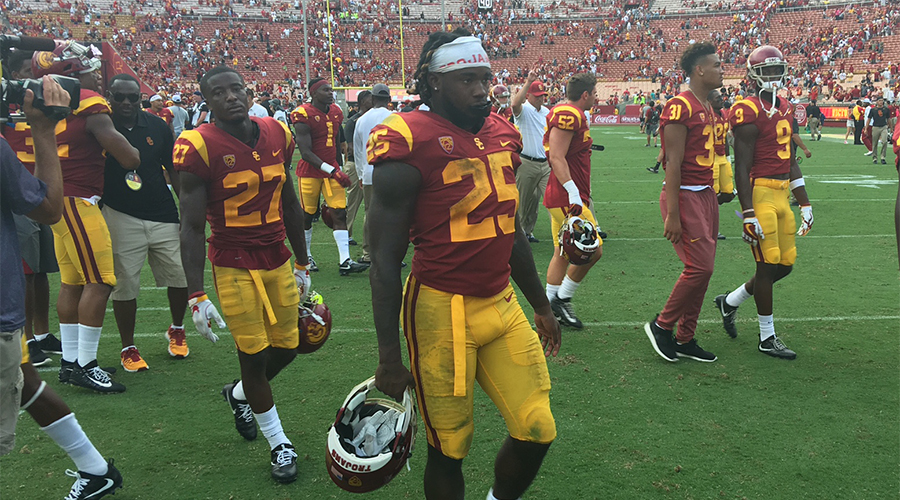 LOS ANGELES — It wasn’t pretty – through three quarters at least – but the Trojans did manage to pull everything together just in time on Saturday to come away with a 49-31 victory over Western Michigan in the Coliseum.

Playing against a Broncos team that most figured the Trojans would handle easily, Clay Helton’s squad struggled throughout much of the game as the Sam Darnold-led USC passing attack sputtered thanks in part to a number of dropped passes and some inconsistent offensive line play, while the defense had difficulty stopping Western Michigan’s rushing attack.

Darnold and Co. started off the game on the right foot as the offense opened up the game with a six-play, 75-yard drive that was capped by a 16-yard touchdown run by Ronald Jones II, whose performance was a bright spot for USC.

But Western Michigan stormed back in a big way as Jamauri Bogan and Jon Wassink scored rushing touchdowns on consecutive drives to give the Broncos a 14-7 lead that they held until late in the second quarter. That’s when Jones finished off an eight-play, 45-yard drive with a one-yard touchdown plunge, making it a 14-14 tie at halftime.

The Trojans and WMU traded touchdowns in the third quarter, before USC appeared to seize momentum with freshman tailback Stephen Carr scoring the first touchdown of his career from one yard out, giving USC a 28-21 lead. The Broncos weren’t ready to back down yet, however, and Darius Phillips took the ensuing kickoff back 100 yards for a touchdown to tie up the game at 28-28.

But that’s when USC really took over. Jones came through for the Trojans again mid-way through the fourth quarter, breaking a loose for 37-yard touchdown run. The junior tailback finished with 159 yards and three touchdowns on 18 carries.

Western Michigan would answer with a 43-yard field goal, but then the Trojans rushing attack answered yet again, with Carr scoring his second touchdown – a thrilling 52-yard run to put USC in front 42-31. In his first game for the Trojans he amassed 69 yards on seven carries.

The Trojans defense would get in on the act next, with Marvell Tell intercepting a Wassink pass attempt and returning it 37 yards for the final score of the afternoon.

Following Tell’s touchdown, Jake Olson, who is legally blind, played for the first time in his collegiate career, successfully snapping the ball back on the PAT attempt, which was good.

USC wound up outgaining WMU in total yardage 521 to 357. The Broncos compiled an impressive 263 yards on the ground, but it should be noted that 161 of those yards came in the first half, when junior linebacker Cameron Smith was not playing due to suspension.

Darnold, a leading Heisman contender, finished 22-of-33 passing for 289 yards with two interceptions, and he also rushed for an 11-yard touchdown.

The Trojans will be back at home next Saturday against Stanford.