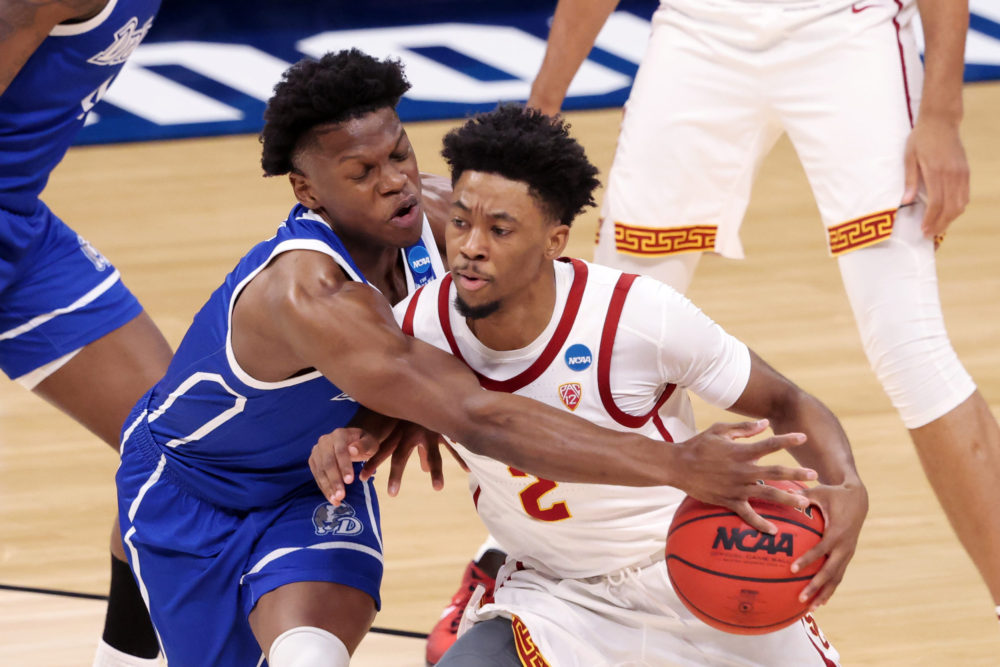 The Trojans broke open a close game in the second half and beat Drake 72-56. With the win they will play Kansas on Monday in the round of 32. USC played exceptional defense after the break limiting the Bulldogs to 7-37 from the floor and 2-14 from three. One quick peek ahead: the opening betting line is USC by one.

Andy Enfield knew when he came to USC eight years ago that the school did not have a rich basketball history and the job was a rebuilding effort. This team has helped the Trojans continue USC’s climb toward the basketball elite. Andy pointed out after the win that the Trojans are 45-16 over the last two seasons and that only Kansas and Baylor have more wins over this stretch.

One piece of evidence that the Trojans have become nationally relevant was a very long article in today’s New York Times on the Mobley brothers and family. The article described the close family environment and especially focused on the relationship between the two brothers.

This team carried not only their own hopes and dreams with them onto the floor today but also the dreams of Jonah Mathews, Nick Rakocevic and Daniel Utomi who missed out last year when the post season was cancelled. They also played for Jordan McLaughlin, Chimezie Metu, and others who were snubbed and were not included in the 2018 Tournament even though they finished second in the conference regular season and tournament and were 24-10. Over the last half dozen seasons the Trojans first began and are now well into the process of becoming an important team on the national stage.

“This win meant a lot to our team, players and coaching staff,” Enfield said.

He added: “Our guys showed a lot of defensive toughness especially in the second half.”

At the half he told his team that the biggest thing they needed to do was to take away Drake’s Joseph Yesufu who had carried the Bulldogs in the first half. USC employed switching defenses from man to zone and back in an effort to both slow and wear Yesufu down and “our length getting after their shooters bothered them.”

Chevez Goodwin is the only Trojan who had Tournament experience before today while he was at Wofford. The Trojan defense in the first half did not match their very good season numbers but in the second half they swarmed Yesufu and the rest of the Bulldogs. The inexperienced post season Trojans might have benefitted by playing in an almost empty arena, though the same could be said about Drake which won its first Tournament game in 50 years on Thursday. Without the roar of a full house the players didn’t get caught up in the usual March fan driven craziness. Enfield said that USC had played in a lot of close games on the road and neutral sites this season and the moment was not too big for them.

The Numbers Tell The Story

Yesufu looked unstoppable early, making his first four from behind the arc and five of his first shots overall. The other Bulldogs were 1-8 during this stretch. The Trojans started to shut down the Bulldog star guard late in the first half, limiting Yesufu to one of his last six first half shots. Yesufu totaled 26 points for the game but made only 8-22 shots and 6-11 from three after his torrid start.

The other key Bulldog, ShanQuan Hemphill, played sixteen minutes in his second game back from injury but contributed only six points. He played ten minutes on Thursday and couldn’t go in the second half when his broken foot tightened up. His six points tied for the second on the team along with big man Darnell Brodie. Brodie struggled against the Trojans’ front court bench and made only 3-11 shots.

The Trojans continue to struggle from the foul line, making only 8-15 free throws including missing a couple of front end one and ones. They also had a stretch in the second half when they turned the ball over on four consecutive possessions, but otherwise USC took very good care of the ball with nine total turnovers in the game.

Several Trojans had good offensive games. USC made 29-58 shots and 6-18 from three and outscored Drake 42-18 in the paint. USC also had 20 assists on their 28 baskets led by Tahj Eaddy with 10 assists and only one late turnover. Tahj got most of his 9 points late in the game and finished with 9 points and 6 rebounds.

Evan was the focus of the offense especially in the first half. He led the Trojans with 17 points and 11 rebounds including 5 offensive boards. He made 7-15 shots, 1-4 from three and 2-4 from the line. He also had three of the Trojans’ seven blocked shots. Isaiah Mobley was limited with two fouls in the first half but played a very strong second half. He made his first six shots in the game including a three before missing a late three pointer. He also made both of his free throws for 15 points and 5 rebounds.

Drew Peterson had a very good game and appeared to be back to the Drew of the first half of the season. He made half of his ten shots including his only three point attempt for 14 points. Drew used his height advantage to get inside for good shots.

The Trojans were consistent on offense; USC made 17-32 shots in the first half and 12-26 in the second.

The Trojans Overcame Some Of Their Recent Problems

USC’s defense had slipped in the past few weeks but in this game they were special. Enfield said during the halftime break they focused mainly on defense. He felt if they shut down Yesufu the Trojans would be fine and that’s how it worked out.

Enfield Called Out Several Trojans For Their Exceptional Play

“Isaiah Mobley was sensational in the final 12-13 minutes,” Enfield said. “He was posting up and making jump hooks.”

Tahj did not have a turnover until very late and he played very good defense. He also made two key baskets late to extend the lead.

“Max was tremendous on defense,” Enfield said. “He closes out on shooters very quickly.”

Max’s length and quickness were especially important when they played their zone defense.

Now USC can begin to evaluate Kansas. The three seed Jayhawks beat fourteen seed Eastern Washington earlier in the day 93-84. Coach Bill Self likes to play at a fast pace and Monday’s game will not resemble the win against Drake. I’ll venture a guess that someone on the Trojan staff had started to break down film on KU and begin to work on a potential game plan before today’s game.

We will post a complete game preview tomorrow; today is a day for USC fans to savor the win and reflect on how well this team has performed with almost a complete roster overhaul. A couple of Trojan players have said recently that they would have loved to play this season before big crowds but nothing is normal about this year. Ask VCU who forfeited today before their game against Oregon because of multiple positive Covid tests. The virus is something new to March Madness.

It has seemed all season that the Trojans needed to make the Sweet 16 to make a statement; with Evan Mobley and this roster I think that’s a reasonable expectation. Bring on the Jayhawks!