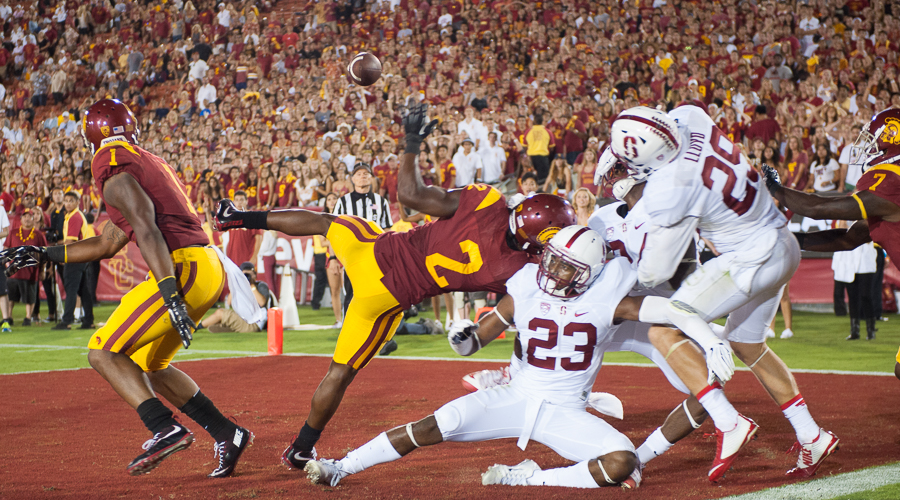 1:00 p.m. – Head down from the 20th floor of the San Jose Marriott to take the shuttle to Levi’s Stadium for all the hoopla and ceremonies. A Pac-12 rep directs me to the opposite entrance door to the hotel. A fancy coach is waiting and the driver offers some bottled water.

1:15: The freeway ride north is smooth and there are only about four media members on a coach, which is the size of Trojans right tackle Zach Banner. The coach exits the freeway, and we travel through a surface street east and pass the amusement park, Greater America, a cousin of Magic Mountain in Los Angeles.

1:25: Driving past a series of restaurants and suddenly make a right into the entrance. There are Trojans fans everywhere, and the tailgating is just starting to heat up. There are Pac-12 banners everywhere and huge banners of Trojans quarterback Cody Kessler and Stanford’s Kevin Hogan. The drop-off point for media is a good walk away from the security search area. As the coach comes to a stop, the infamous Stanford Band, which had been on restriction for bad behavior, is now eligible to perform.

1:35: After going through a long line – yes, even for media – for security, we go inside Levi’s Stadium. It is an monolith NFL stadium, a reminder of football played at the highest level – a glimpse into what an NFL stadium will look like when the Sunday League names the team(s) coming to L.A.

1:50: The Levi’s Stadium press box is huge inside, and the seating area for dining is extra huge. It’s like being in a grand hotel. The WeAreSC contingent is seated near the Stanford end zone. We are almost looking straight down on the field. There are very large windows looking onto the field, which prevent any weather issues inside This will be appreciated as the game goes later into the evening.

2:00: Will head down to the field to cover the Pac-12 All-Century Team, which will be in the 49’ers conference room underneath the stadium. The media will be allowed to be on the field until 30 minutes until kickoff. The Trojans team has been assigned the bench on the press box side.

2:17: Walking into the 49ers auditorium for the press conference, I get the chance to hello to Trojans legend Ronnie Lott, who I have known since he was in high school. Lott, as always, is gracious. On a monitor inside the auditorium, last week’s Stanford win over Notre Dame is being shown.

2:36: Pac-12 commissioner Larry Scott comes to the podium to hype the conference. Scott says the conference has had a record season in terms of 10 bowl eligible teams and adds the Pac-12 is the hardest conference to get a football championship. He also talks about the conference and its relationship with ESPN and FOX, as it applies to so many games being played at night. Scott says it’s a delicate issue. The Commish welcomes Clay Helton as the new Trojans head coach. Scott also says the Pac-12 title game will be at Levi’s Stadium for two more seasons.

2:58: Ronnie Lott, who wearing a black baseball hat with a “SC” logo, is surrounded by reporters and answers questions. Lott says he knew the Trojans made the right choice for head coach in Helton when his best buddy Marcus Allen gave Helton thumbs up. Ronnie says that Helton gets it in terms of what it means to be a Trojan. It’s now a matter of making sure the current players and recruits understand what it means to follow the great players before them. Lott says that athletic director Pat Haden, given the circumstances, has done “a fantastic job.”

3:00: Lott says that Stanford is “borrowing” what USC used to be. The all-time great says that this game tonight will be won in the “trenches.”

3:12: Head to the field. First Trojan I see on the field is former All-American and Troy’s lone Butkus Award winner Chris Claiborne. The Trojans could use Big Chris in the middle today against those monster linemen of the Cardinal.

3:25: Four game officials walk by and look as if they’re taking a leisurely walk in the park – the Levi’s Stadium Park.

3:30: Two USC trainers are playing catch and it’s all hands on deck.

3:31: JuJu Smith pauses to talk with an ESPN reporter. Talk about distractions.

3:50: The USC Marching Band is sitting behind the end zone and let the music begin!

3:58: All-Pac-12 linebacker Su’a Cravens looks as ready as I’ve seen him. He is calm but looks ready to unload.

4:15: I don’t understand why Stanford, whose colors are red and white, insist on wearing black. They look like Oregon State.