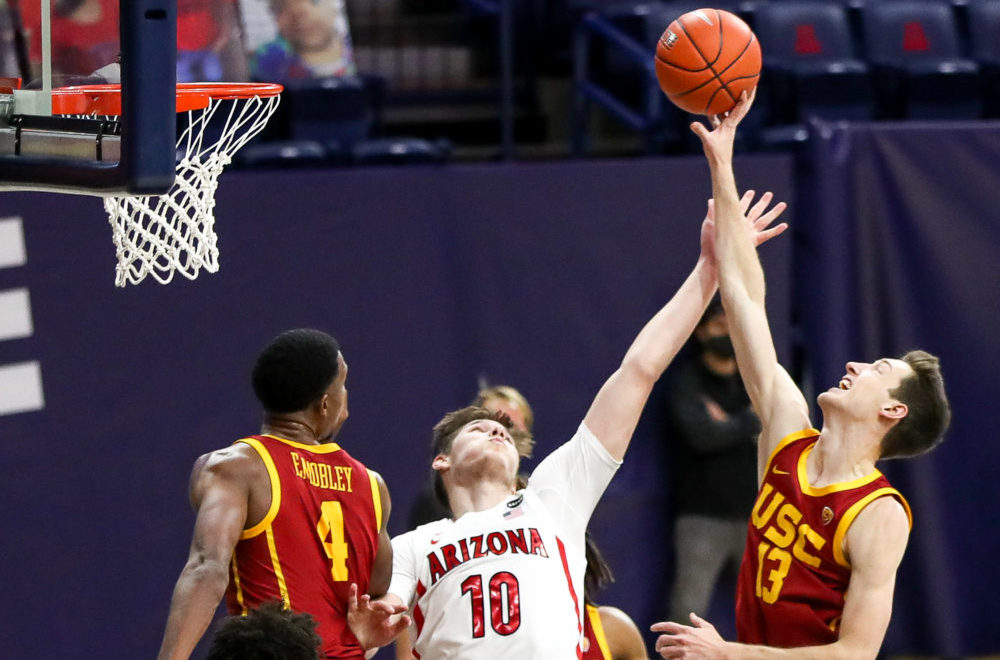 On Thursday night, the Trojans got a very good win over Arizona in front of a national TV audience on ESPN. The Trojans were 5-point underdogs but played with confidence and under control as USC won 87-73. In doing so, the Trojans posted their first win in Tucson since 2009 and their largest margin in the series since 1982.

Everyone played well for the Trojans in all phases of the game. After a slow start and trailing by 9 at the 12:40 mark in the first half, the Trojans went on a run and led 35-34 at the break. USC also started the second half slowly by turning the ball over on their first two possessions. They had the lead most of the second half and finished on a tear making their last 6 shots and holding Arizona to 1-of-8 over the same stretch.

This was a big game for both teams. In the season’s first NCAA Evaluation Tool (NET) rankings that came out this week, the highest ranked Pac-12 team was Colorado at number 14. Oregon is 19th, Arizona 21st and the Trojans 26th. The rest of the conference is ranked 54 or below. Unlike teams in the Big 10 or Big 12, the Trojans will likely not play 10 or 15 games against quadrant 1 teams, which makes every one of the matchups with high ranked conference teams very important. The Trojans were also helped Thursday by Colorado beating Oregon. The 7-2 Trojans are now 2-1 in conference play with their lone loss to Colorado; when the Buffs get a good win the Trojans also benefit, at least in this early stage of conference play.

The Trojans made 31 of their 53 shots (58%), 8-of-14 from three and a surprising 17-of-23 (74%) from the line. Isaiah White started again with Ethan Anderson still unable to play and Isaiah was tremendous. He led the Trojans with 22 points, converting 7-of-10 shots. Over his college career Isaiah has not been a good shooter from behind the arc and the Wildcats gave him plenty of room outside. He made 3 shots from downtown and 5-of-6 from the line. Isaiah’s shot has very little arc and every shot looks short but in this game the shots fell.

Coach Enfield called Isaiah the Trojans “MVP tonight.” The coach noted that Isaiah was very efficient on offense getting 22 points on only 10 shots. He also contributed 2 steals and Enfield said he “played very hard … and had his best game as a Trojan.”

Evan Mobley looked like a different player than the Evan who played against Utah. He scored 19 points on 7-of-13 shooting from the field and 5-of-6 from the line. He was much more aggressive and played hard at both ends. He had a double double with 11 rebounds.

Coach Enfield said that they called a number of plays for Evan. They tried to get him the ball with quick movement off screens. Evan played 37 minutes and Enfield said Evan was a bit winded late, but with the two other bigs out on fouls he stayed with Evan. Enfield said the team did a better job of getting the ball to Evan in good scoring position and Evan did not have a turnover.

“Tonight (Evan) grew up,” Enfield said. “He played a great game overall at both ends.”

Drew Peterson did a lot of everything for the Trojans. He scored 7 points, making 3-of-6 shots including one three, and added 8 boards and 10 assists. Enfield called Drew a complete player. He can dribble, pass, defend and shoot at a high level. Drew ran the offense most of the game and had only 1 turnover. Drew is a “really good three point shooter, though he doesn’t take many.”

He made a big three to stop a mini Wildcat run in the second half.

The Trojan Defense Shut Down The Arizona Guards

This was a good defensive performance against a high scoring team. The Wildcats made 25-62 (40%) of their shots, which is a little better than most Trojan opponents. They rely on their guards for much of their offense. USC held Arizona to 4-of-16 from three and limited open outside shots. Freshman big Azuolas Tubelis kept Arizona in the game. He made 11 of 16 shots and 7-of-9 from the line. In the first half especially he carried the offensive load but in the second half the Trojans did a much better job against him.

USC’s size bothered everyone other than Tubelis. Isaiah White, Max Agbonkpolo, Drew Peterson and Noah Baumann all played excellent defense and gave the Wildcats’ guards little room to work. At times, especially late, the Trojans played zone. Isaiah Mobley and Chevez Goodwin both fouled out and Enfield went to a “smaller” lineup with Evan the only true big, though the wings are all 6’6” or bigger. He complimented the four wings and said he liked how hard they competed against Arizona’s very quick guards. Enfield thought the zone bothered the Wildcats and stayed with it for a long stretch.

U of A’s point guard and leading scorer James Akinjo was completely shut down. He missed all 9 of his shots and was a non factor. The 6’1” Akinjo is not a great shooter; his game is to drive to the rim or dish. The Trojans’ size bothered him and he was unable to get into the lane against the Trojan man or zone defense.

Evan Made The Play Of The Game

At the nine minute mark in the second half Evan went up very high with one hand to slam down a teammate’s missed shot and then stole the inbounds pass which resulted in another Trojan bucket.

The Trojans Were Much Better In The Second Half

Arizona is a top-10 rebounding team nationally. In the first half they dominated the boards 24-15 and had 7 offensive rebounds to only 1 for USC. The final rebound count for the game was even at 32, and Arizona got only three offensive rebounds in the second half to two for the Trojans. The Trojans have struggled keeping teams off the offensive boards in several games, but they played much more physically in the second half. The Wildcats took nine more shots in the game as a result of more missed shots and 15 Trojan turnovers, 10 in the first half. The Wildcats had only 10 turnovers but the Trojan defense was so good that the Trojans outscored Arizona 19-10 in points off turnovers.

This is a win to savor; the Trojans have had little success in Tucson. The absence of the usual sellout crowd no doubt helped, but this was a very good performance regardless. USC has to very quickly begin to focus on the next game; they play at ASU late Saturday afternoon. The Devils have not played up to expectations so far and on Saturday will be playing their second game after being off the court since mid December due to the virus.

The Trojans have a rare chance to sweep the desert trip. A win on Saturday will help USC in the polls and in next week’s NET rankings. The coaching staff deserves a lot of credit for putting this roster together. The Trojans added five transfers and four have been big contributors. Josh Morgan was not expected to play this season and has had very limited minutes. Chevez Goodwin gets overlooked a bit but he is playing very well and with great energy. Foul trouble has impacted his playing time in the last few games.

USC’s problems didn’t all go away in this game, but great progress was made. They were much better from the foul line and in the second half they did a good job limiting turnovers and reducing Arizona’s offensive rebounds. And perhaps most importantly they were able to get the ball to Evan where he could make plays. He made a variety of shots and the Arizona big men had difficulty staying with him.

USC is still on Ethan Anderson watch – he suffered a back injury on December 3 and has not been in uniform since. Before or after every game Enfield has said that Ethan is making progress and is close to returning. If this game is any indication he may have to fight for minutes when he returns.