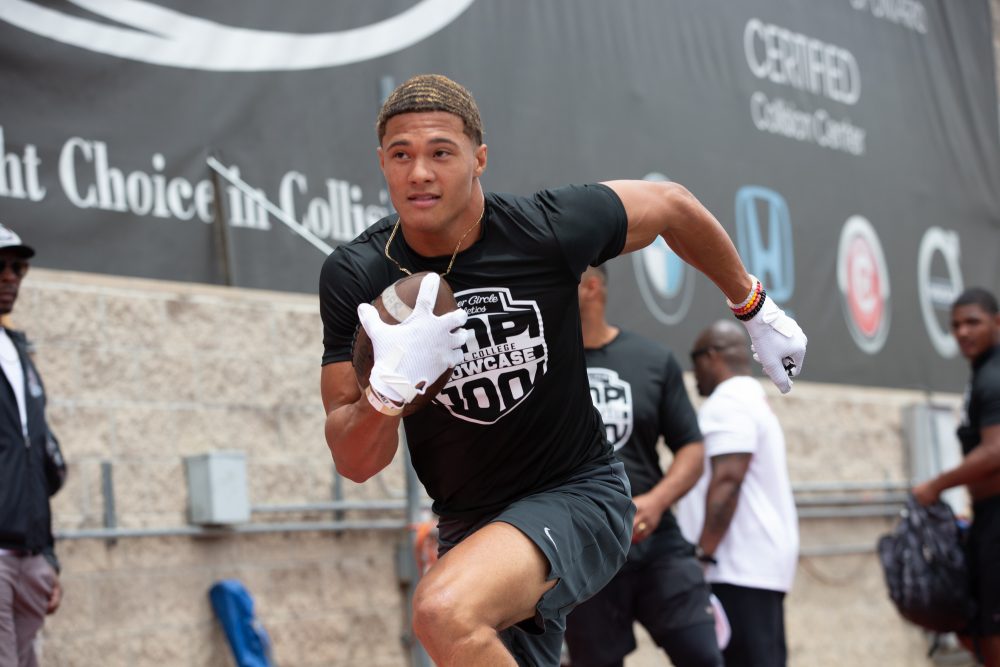 Class of 2022 cornerback Domani Jackson provided his own fireworks on Saturday, as the potential five-star prospect announced his top ten schools.

It’s a list without many surprises, and one that includes a number of recruiting heavyweights.

Alabama, Arizona State, Clemson, Georgia, Michigan, LSU, Ohio State, Oklahoma, Texas and USC remain in the mix for the 6-foot-1, 185-pound cornerback who will likely be in the mix for a fifth star at some point and will push to be both the No. 1 cornerback in the class and player in the state.

Currently he checks in as the No. 12 overall prospect, No. 2 cornerback and No. 2 player in California.

Jackson is a priority recruit for USC in the 2022 class and he’s very familiar with the campus and coaching staff. USC wasn’t able to reel in the top defensive player in the state in the 2019 or 2020 classes, as defensive end Kayvon Thibodeaux and linebacker Justin Flowe wound up at Oregon. But with a revamped recruiting department and a new defensive coaching staff attacking the recruiting trail, the Trojans are squarely in the mix for 2021 defensive end Korey Foreman (Corona, Calif./Centennial)–the nation’s top overall prospect–and will likely be in the conversation for Jackson all the way until a decision is made.

Jackson possesses terrific speed and athleticism to go with the size and coverage skills to develop into an early contributor at the next level and a potential star at the collegiate and professional levels.

While USC is in good shape with Jackson, there are definitely a few schools to watch for here. The recent offer from Clemson was a big one and the Tigers have his attention. Michigan is looking to continue recruiting the state hard, signed cornerback Darion Green-Warren in the 2020 class, and has a commitment from Jackson’s teammate, wide receiver Cristian Dixon, in the 2021 class. The other programs on Jackson’s list certainly have the ability to make an impression and stay in the hunt for him.

USC is putting together a very good class of defensive backs in this 2021 class, though just one is a cornerback–recent four-star commitment Jaylin Smith (Mission Hills, Calif./Alemany). The Trojans are still chasing two elite prospects there, in four-stars Ceyair Wright (Los Angeles/Loyola) and Nathaniel Wiggins (Atlanta/Westlake). But no matter what this class looks like at cornerback, Jackson will be the top target there in the 2022 class for USC. By the time Jackson gets to college, USC cornerbacks Olaijah Griffin and Greg Johnson will have exhausted their eligibility, and Isaac Taylor-Stuart and Chris Steele will be in their final season.