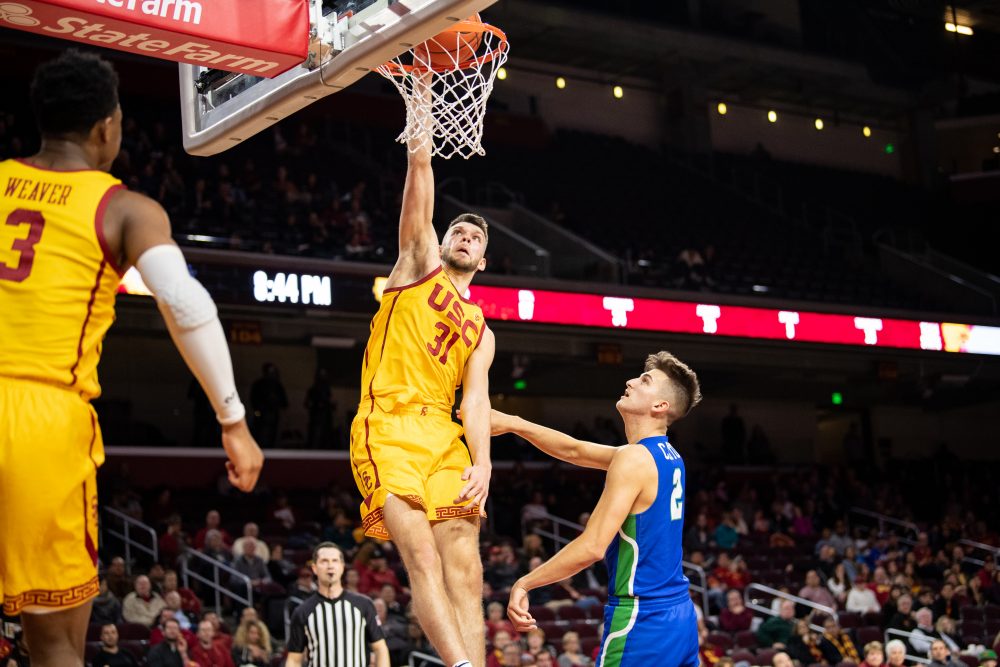 The last time the Trojans won the conference regular reason title was in 1985, when they shared the top spot with Washington. They have an opportunity this season but will need to be at their best over the last five games starting with Thursday night at Colorado and Saturday afternoon at Utah. Currently Oregon and CU are at the top with 9-4 records, followed by UofA and ASU at 8-4, and then SC and UCLA at 8-5. The conference championship will likely not be decided until the final weekend of the regular season. SC has the second most road wins by a PAC 12 team over the entire season with 5, one behind CU, and the Trojans’ NET ranking is 49 as of Tuesday. Wins in these last two road games would be huge.

None of the final five games is a gimme. It appears the Trojans will need at least a split this weekend to stay in the race. The only game left against a team not in the group of six at the top of the conference standings is at Utah on Saturday, but conference road games are always hard to win. The Utah game is on the back side of the trip at altitude, which is tough on visitors, and the Utes are 10-1 at home this season.

As of Tuesday, Onyeka Okongwu’s status for the games this weekend is still not known. His presence will be very helpful, but even if he is able to play on Thursday he may not be in game shape. If Big O does play, it is impossible to predict whether his presence could impact the much improved play of Isaiah Mobley, who started in his place last weekend but will have reduced minutes if O plays.

Mobley and Daniel Utomi have played at a much higher level over the last ten games. Mobley is playing with much more physicality, especially on defense, and Utomi’s confidence is greatly improved and he is shooting from beyond the arc with much more success. Over the last five games, Utomi has averaged 12 points and Mobley has averaged 9 1/2.

While the defense has been consistently good over the first 26 games, with only a couple of exceptions, the offense has been wildly inconsistent in the paint and from the outside. Turnovers have been a problem in several games, especially if the other team employs a full court press or tries to trap the ball. The Trojans turned the ball over 24 times at ASU, and thereby lost the game. Expect to see CU press on Thursday, which, due to the absence of Kyle Sturdivant, will put a greater burden on Ethan Anderson. Jonah Mathews and Elijah Weaver will also have larger than usual ball handling duties.

Preview of The Game At Colorado

The Buffs are 12-2 at home, and have the most experienced team in the league. Their NET ranking on Tuesday is 11. Last weekend they lost at Oregon by 8 and beat OSU in Corvallis by 22. Beginning with the Buffs’ one sided win at Galen, SC has lost 3 of its last 5 games. The Buffs dominated all phases of the win over the Trojans and cruised to a 78-53 victory. CU made 52% of their shots and over 47% from three for the game, and were very hot in the second half making over 62% from the field and 52% from three. On the other side, the Trojans shot 38% and 31% from three. The Buffs also out rebounded SC by 6.

The Trojans entered that game in first place, but lost the top position that night. CU double teamed the ball when it went inside, and the Trojan guards shot poorly and didn’t force Colorado to change its strategy.

The Buffs have two big men who contribute. Evan Battey is a very big body inside. He averages 5 points and 6 rebounds and makes 54% of his shots. Lucas Siewert scores 8 ppg and grabs 4 1/2 boards, and he converts on 48% of his shots and 39% from three.

This will be a very difficult game for the Trojans. If Big O can’t play, I don’t see SC keeping it close. If he is able to play, the Trojans have a chance, but must play a full 40 minutes without the usual lapses and can not afford to start slowly.

Preview of The Game At Utah

The Trojans had a comeback 56-52 win over the Utes on January 30 at Galen. SC played poorly on the offensive end and trailed at the half before rallying to win. The Trojan defense was very good that night, and they got just enough scoring from four players to pull it out.

Nick Rakocevic had 16 points and 15 rebounds and Big O had 14 points, 14 boards, and 4 blocks. On the outside, Elijah Weaver scored 14 off the bench and Jonah Mathews had 12. The rest of the team combined for only 2 points.

The defense locked up the Utah offense. Utah’s best player Timmy Allen was limited to 13 points on 5-20 from the field. As a team, the Utes made only 32% of their shots and 28% from three.

Utah’s issues are in the front court, and the SC bigs need to take advantage. Mobley has played much better lately, and even without Big O, SC should control the paint.

The Utes are a much different team at home, and a much better effort by the Trojans will be needed to win in Salt Lake. Utah’s NET ranking is 84, but they have some big wins, including over Kentucky.

The Trojans need to win one of these games to stay in the race for a first round bye in the Pac-12 Tournament and possible  league title. I expect the Trojans to beat Utah, but don’t think they have enough on the offensive end to beat the Buffs without Big O.  If he does play, the Trojans have a chance, but will enter the game as a sizable underdog.

Jonah now has 1308 points and passed Taj Gibson for 20th place on the career scoring list. Nick has 1257 points and is 23rd all time.

Nick has 881 career rebounds and needs only 15 more to catch Taj for second most all time. Ron Riley leads with 1067.

Ethan Anderson has 116 assists this season, tying Julian Jacobs and Cameron Murray for the fourth most by an SC freshman. D’Anthony Melton is third with 125. Burt Harris has the top mark at 143.