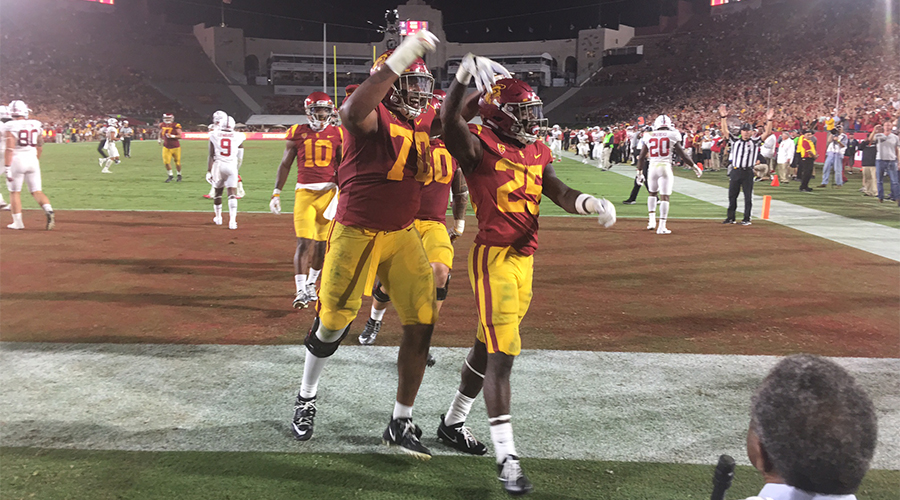 After an up-and-down performance in their season-opening victory over Western Michigan, the Trojans put together an impressive showing on Saturday as they took down Pac-12-foe Stanford in the Coliseum by a final score of 42-24, improving to 2-0 on the young season.

Led by quarterback Sam Darnold, who completed 21 of 26 passes for 316 yards and four touchdowns with two interceptions, the USC passing game got rolling in a big way for the first time this fall, and the ground attack wasn’t too shabby either as both Ronald Jones II and Stephen Carr eclipsed the 100-yard mark.

On the defensive side of the ball, meanwhile, Clancy Pendergast’s group played with tremendous physicality, overcoming a slow start to stymie the Cardinal offensive attack throughout a majority of the second half.

It was a back-and-forth affair to begin the game, with the Trojans scoring on their first possession of the night as Steven Mitchell (4 catches for 94 yards) hauled in a four-yard touchdown pass from Darnold to cap a 13-play, 80-yard drive.

Stanford answered that score in a hurry, however, as Bryce Love quickly reeled off a 75-yard touchdown run to tie the game up at 7-7.

It was 14-14 in the second quarter when Trojans wide receiver Deontay Burnett (9 catches for 121 yards) took a pass outside from Darnold, breaking two tackles and diving for the pylon to complete a 22-yard touchdown play.

The Cardinal would add a field goal to cut USC’s lead to four with less than three minutes remaining in the first half, but that was more than enough time for Darnold and Co. The redshirt-sophomore passer engineered a 5-play, 75-yard drive that was capped by a 25-yard touchdown pass to Burnett, with the wide out laying out to make a beautiful grab on the scoring play, and the Trojans led 28-17 at halftime.

After a frenetic start, the pace of the game slowed down at that point, and there wasn’t another score in the contest until early in the fourth quarter when Darnold found Mitchell for a second time for an 11-yard touchdown pass.

The Cardinal would answer with a touchdown of their own, but then Ronald Jones II put the game on ice as he broke loose for a 23-yard touchdown – the final score of the night.

Cameron Smith led the USC defense with eight tackles, and the Trojans out-gained Stanford by a total yardage margin of 623 to 342.

Not everything went USC’s way, though. In addition to the two interceptions by Darnold, the Trojans were penalized eight times for 90 yards. A number of those penalties came at key moments of the game, and some appeared to be questionable.

In the end, however, the Trojans were able to overcome every obstacle in their way.

Up next, USC will face Texas at home next Saturday.