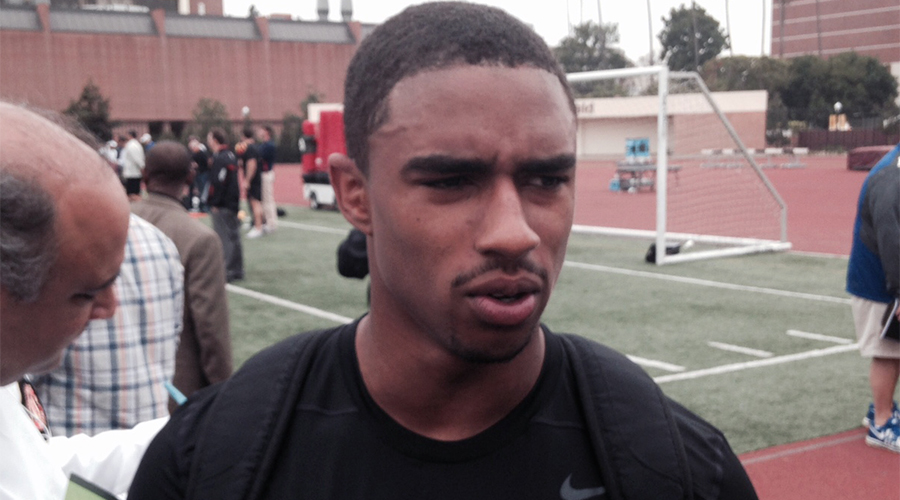 The Trojans held their annual Pro Day on Wednesday at the Loker track stadium with several of the players electing to stick with their testing numbers from the NFL combine which was held last month.

One player who didn’t stick with his numbers was George Farmer, primarily because he wasn’t invited to the combine. That meant the Pro Day was his primary shot to impress the league personnel in attendance with a fast 40 time and he certainly did that with a 4.40 on the first attempt, and a 4.35 on the second. Both times were electronic (the 4.35 would have tied him for the 3rd fastest wide receiver mark at the combine) and it pretty much guarantees that Farmer will be in a camp next fall with the chance to make a team.

“I thought it was a satisfactory time,” Farmer said. “I’ve been running consistently in the 4.4 range so it was what I expected.”

Leonard Williams, who is expected to be one of the top 2-3 players taken, elected to skip the testing but did take part in some position drills and looked terrific as usual. It should be noted that the coach who put Williams through drills was from the Tennessee Titans, who hold the No. 2 overall pick and are rumored to be a serious candidate to choose him.

“I told the NFL teams that they better not pick a quarterback before me because I’m going to hurt him,” Williams said with a smile on his face.

Nelson Agholor was able to go through receiver drills after suffering an injury at the combine and not being able to complete all the drills. Agholor went through the pass catching drills as Buck Allen using the same quarterback, but then walk-on Anthony Neyer came in to throw to Farmer and former tight end Dominique Byrd.

One of the biggest statements of the day was made by Josh Shaw, who not only took part in the drills and looked sharp, but who faced the media for the first time since his return from suspension for his notable actions last fall.

“I’ve had a chance to talk with all the teams and I looked them in the eye and told them I made a mistake,” Shaw said. “I let them know who I am, a very caring guy who had never caused harm before, and they understood that it was out of character for me. I’ve been thankful for the opportunity to do that.

“It was a really difficult situation that I put myself in, I’m not going to say it wasn’t. I hit rock bottom. Some people say they are glad to go through adversity because they learn something but I don’t think that way in this case. I truly regret everything I did.”