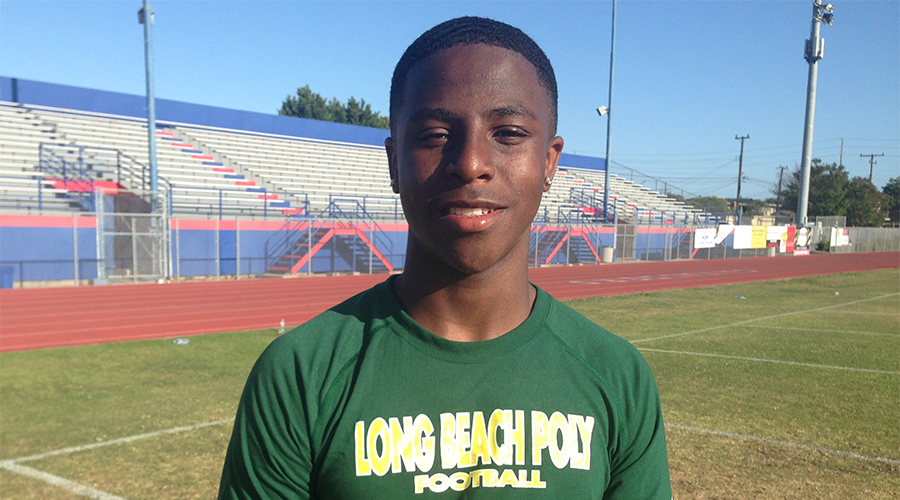 USC has had more than just a little recruiting success over at Long Beach (Calif.) Poly through the years, with JuJu Smith-Schuster, Iman Marshall and the recently-signed Jack Jones standing out as the latest in an extremely long line of high-profile Jackrabbit stars who went on to ink with the Trojans.

It comes as no surprise, then, that the USC coaches have set their sights on another big-time prospect at the local powerhouse this offseason – Class of 2018 tight end/wide receiver prospect Camren McDonald.

A fluid athlete with 6-foot-4, 210-pound size and excellent pass-catching skills, McDonald received an offer from the Trojans staff a little over a month ago when he made his way to the Coliseum to take in a Saturday spring practice session with Jones.

“Jack Jones, he had kind of been pumping me up over there, not to mention Monica Kim, our recruiting coordinator at Poly, so they were always close to pulling the trigger,” McDonald said. “So, I went up there and I talked to Coach P [Prentice Gill], he’s the new assistant receivers coach, and they just pulled the trigger.”

With USC being a program in McDonald’s backyard that he’s followed since childhood, it’s safe to say that the offer was a significant one in his eyes.

“They’re one of the biggest schools in the Pac-12, and they’re right up the street so I always followed USC – back when Reggie Bush was there,” McDonald said. “I just love the program. I love everything about it.”

Perhaps more than anything, however, it’s the USC coaching staff that has made the biggest impression on McDonald – so much so, in fact, that he considers the Trojans his early leader.

“They treat me like family – more than any other school, so I would have to say they’re in the lead for that reason,” McDonald said. “They always treat me like they actually really want me. The coaches really talk to me.”

McDonald worked out in front of a pair of those USC assistants – wide receivers coach Tee Martin and linebackers coach Johnny Nansen – last Wednesday at a 7-on-7 competition at Gardena (Calif.) Serra, and he put on a solid performance, making a number of catches all over the field.

His responsibilities changing from game-to-game depending on the opponent, McDonald has the ability to line up at H-back, down in a three-point stance at tight end, and split out all in the same game. Looking to take advantage of his versatility, the USC coaches have talked to him about filling a similar role for them, with one Trojans tight end, in particular, being pointed to as an example.

“They like me as a Daniel Imatorbhebhe-type guy,” McDonald said. “He had a really productive spring game. That’s another reason why I like them a lot. I love the way they incorporate the tight end in the offense – the type of routes that he’s running, I’m really good at those.”

While McDonald does have USC out in front at this point in time, other schools are still very much in the mix.

“It’s pretty wide open because I’m still young,” McDonald said. “Anybody can come in and steal the spot.”

In addition to the Trojans, McDonald maintains heavy interest in UCLA, Washington State, Utah, Oregon State and Colorado – all of which have offered. He’s also receiving a large amount of attention from Arizona, Arizona State, Michigan and Washington, and he admits that if any of those schools were to offer, they would immediately jump into his list of favorites as well.

In looking at each program, McDonald admits that there are certain factors that he’s taking into account, including one that figures to help both USC and UCLA.

“My mom talks to me everyday, she would love it if she had access to every one of my home games, so staying local, I’m going to think about that, but that won’t be the final deciding factor,” McDonald said. “I have to look at the way they use my position, I have to look at the quarterback that’s in my class, and first and foremost -education. I have to have a good degree to fall back on.”

USC certainly appears to be in solid position when it comes to the race for McDonald’s services, but with almost two years to go before he will sign a National Letter of Intent, he doesn’t see himself making any kind of decision anytime soon – although he did admit that train of thought could change down the line.

“Committing earlier would be an option, but I do envision myself going through the whole process like a typical Long Beach Poly guy, because Coach Kim preaches that de-commitments don’t look good at all,” McDonald said. “So, more than likely I’m going to go through the whole process, but if a school just jumps ahead, and my parents like it, Coach Kim likes it, I like it, and I just want to pull the trigger right then, that’s what I’m going to do.”