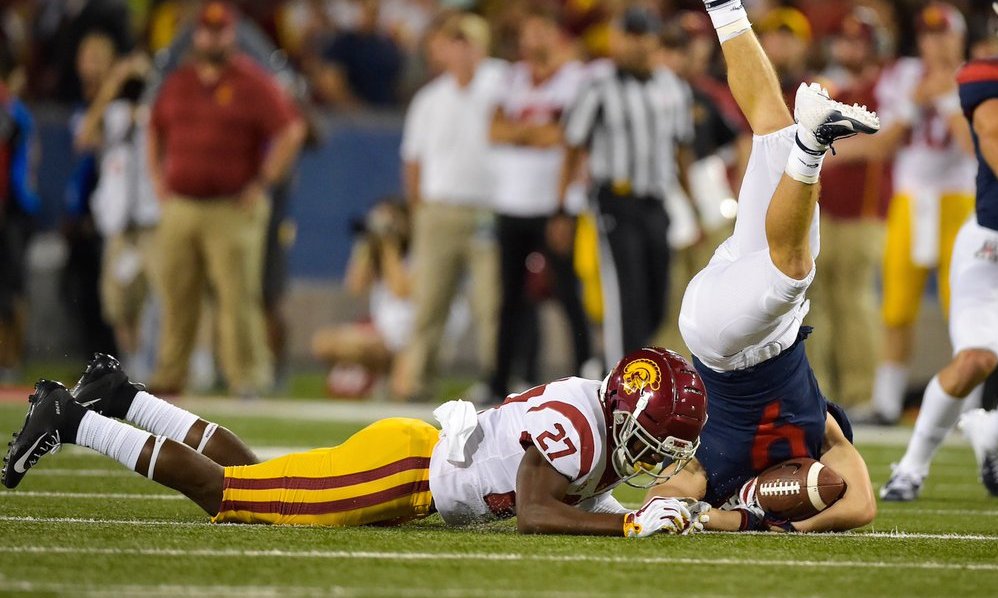 Aca’Cedric Ware had been extremely limited last week in the win against Washington State with a knee injury but tonight he was anything but limited. Ware ran the ball for 173 yards and two touchdowns as the Trojans were able to handle the Wildcats in their own zoo just north of the border with a 24-21 victory.

The first half got off to a great start for the Trojans, as Vavae Malapeai got the Trojans on the board with a one-yard touchdown run. With Chase McGrath out for the season, special teams was thought to take a hit but Michael Brown connected on a 42 yard field goal to put USC up 10-0 andWith a 26 yard touchdown run by Ware the Trojans went into the break up 17-0. In the first half alone, Clay Helton’s boys had 95 penalty yards.

When the 2nd half began, it really did not look like much had changed as Ware ran 69 yards to put USC up 24-0 early in the 3rd quarter. Halfway through the 3rd however, Khalil Tate and his fellow Wildcats woke up. Tate threw a 33-yard strike to Stanley Berryhill to put the Wildcats on the board. Then, all of a sudden, USC just could not hold onto the ball. Back-to-back drives in the 3rd quarter the Trojans coughed the ball up and kept feeding life into the Wildcats. Once again, the Trojans had to sweat out another victory as it took a failed onside kick to finally seal up the victory for the Trojans.

Tonight was a tale of two halves for the Trojans. In the first half, the offensive line kept imposing their will against the Wildcat defense all half long as the Trojan backs were in the secondary consistently. While they may have been putting up some big offensive stats, they also put some pretty big stats in the wrong category, as they racked up 95 penalty yards going into the break. When the game was over, the Men of Troy had eighteen penalties for a total of 169 yards. Definitely not a stat that you want to have a lot of yards for.