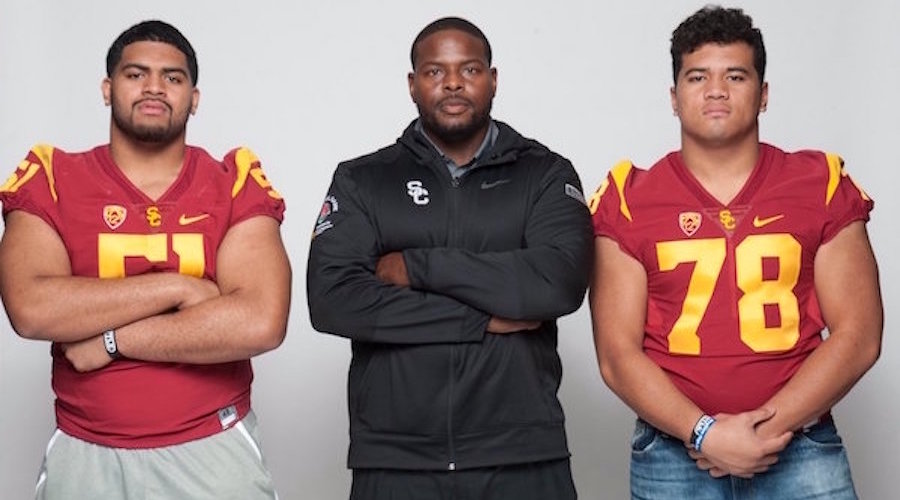 With the signings this morning from Jay Tufele and Austin Jackson it was the capper to terrific line classes on both sides of the ball for the Trojans.

WeAreSC asked a former USC lineman to give his thoughts on the incoming players and how they might fit into the current USC systems.

OL Andrew Vorhees: Very physical. Stays with his blocks. Not as quick as Austin Jackson… Definitely a guard. Nasty streak at times!

OL Alijah Vera-Tucker: Nothing too remarkable. Highlights were of plays that came his way as opposed to making them happen. He looks fairly athletic… He will have to rev his motor up to play for the Trojans.

OL Brett Neilon: Kind of a pr*#@ out there on the field.. Love it! He lives to knock people down. Didn’t see a lot of one on one pass protection with him. That may or may not be a worry. Born to be a Center.

OL Jalen McKenzie: Big Body: Hasn’t really been challenged by guys his own size. Good hands and feet. Should get better and better when he starts going against other 300 pounders.

DL Marlon Tuipulotu: ***Pick of the litter*** Great combination of size and speed. Good instincts, but you can tell that he listens to Coaches. Always in the right spot (Gap integrity). Reads and diagnoses plays quickly. Obviously spends plenty of time watching film. I’ll be shocked if he doesn’t play a ton his Freshman year.

DL Terrance Lang: Big body and athletic. Highlight reel is a lot plays where someone “forgot” to block him. Another player that will grow a lot with University level competition. With good Coaching he can become something special.

DL Jacob Lichtenstein: Straight ahead player with a good motor. His best attribute is that he is a natural pass rusher. Free lances a LOT. Makes plays… wants to be in on every tackle.

DL Brandon Pili: Bull Rusher with an occasional swim move if it presents itself. Potentially a run stuffer. Least athletic of this group of defensive linemen. He’s going to have to do some work to play consistently in the Pac-12.

DL Jay Tufele: Really quick for a Nose guard… Plays the run in a way that will work extremely well within what Clancy likes to do on defense!