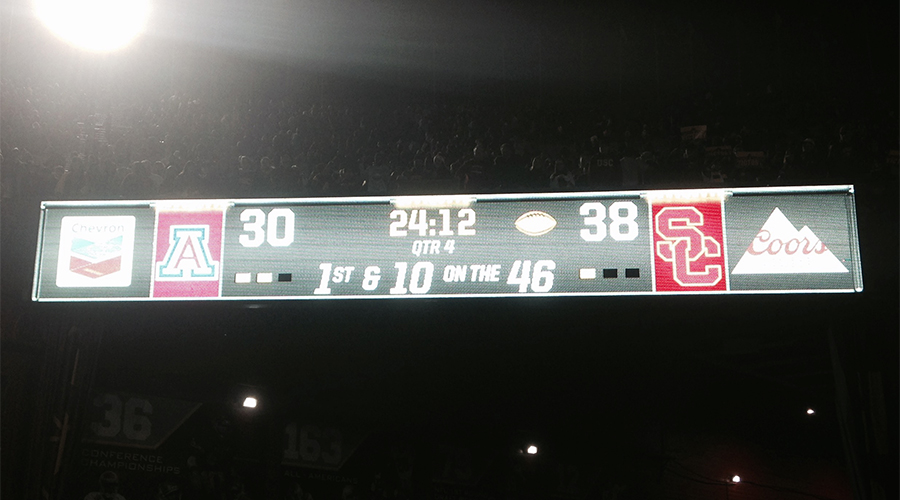 LOS ANGELES — After a sloppy start in the Coliseum on Saturday night, the Trojans fought back to defeat the Arizona Wildcats by a final score of 38-30.

With the Trojans offense struggling, USC found itself trailing 14-0 early in the second quarter to what many assumed was a clearly overmatched Arizona team.

Down 14-3, however, the Trojans started to take command. The big momentum-switch happened mid-way through the second quarter when, one play following a John Plattenburg interception on Anu Solomon, USC quarterback Cody Kessler (22-36, 243 Yds, 2 TD) hit JuJu Smith-Schuster for an electrifying 72-yard touchdown.

Smith-Schuster, whose status was up in the air heading into the game after undergoing surgery on a broken hand earlier in the week, was leaned on heavily early, and he finished the night with eight receptions for 138 yards.

Following a 38-yard field goal by Arizona’s Casey Skowron, Ronald Jones II scored on a five-yard touchdown pass from Kessler and the Trojans and Wildcats went into the locker room tied 17-17 at the half.

The Trojans turned to their ground attack in the second half with extremely positive results, and the USC defense stepped up their level of play as well.

Justin Davis ran for a nine-yard touchdown early in the fourth quarter, giving USC a 24-20 lead, and the Trojans would never again trail.

With USC in front 24-23 a little later, Jones came through with the play of the night, breaking a number of tackles on his way to a 74-yard touchdown. Jones had a huge night, rushing for a career-high 177 yards on 19 carries.

Davis, who rushed for 85 yards on 16 carries, put the exclamation point on the victory a little later, scoring on a 16-yard touchdown run.

USC outgained Arizona in total yardage 472–412 – after a first quarter in which the Trojans were outgained 126-12.

The Trojans next travel to Boulder to take on Colorado this coming Friday night.