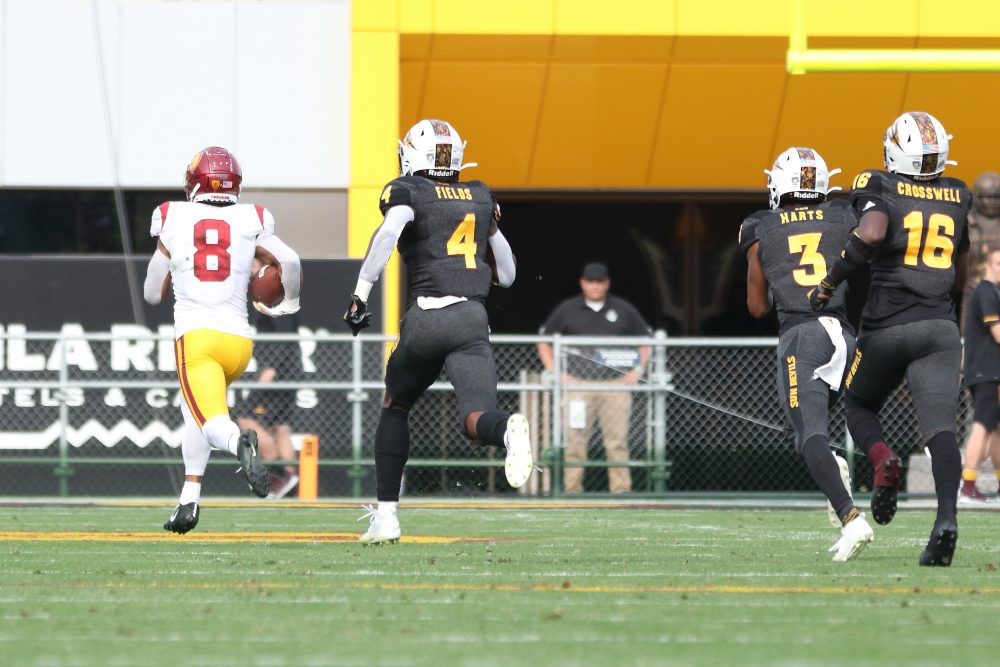 Those words from new USC athletic director Mike Bohn rang out during his introductory press conference on Thursday morning. Two days later, the USC Trojans got off to a blazing start against Arizona State only to limp to the finish line with a 31-26 victory.

It’s tough to imagine that game starting any better for USC, as quarterback Kedon Slovis started 11-for-11 passing and finished the first quarter going 15-for-17 for 297 yards and four touchdowns, as the Trojans took a 28-7 lead. The 297 yards is a USC record for passing yards in the first quarter and the most passing yards for any quarterback in any quarter since 2011, according to ESPN. With all of that, USC was forced to survive a last-minute drive from Arizona State, which was snuffed out by a phenomenal play when senior defensive end Christian Rector batted the ball into the air and made a diving interception to seal the win for the Trojans.

Up 28-7, issues that have plagued the Trojans all year rose up in a big way, as the Sun Devils went on a 19-3 run over the final three quarters. USC threw an interception, fumbled, gave up a 97-yard kickoff return and had a variety of penalties in all three phases — one of which wiped out an interception — as the Trojans again were undisciplined and lost composure throughout. USC finished the game with nine penalties for 93 yards, including seven false starts — four special teams false starts — and several personal fouls.

While Arizona State played without starting quarterback Jayden Daniels, as he missed the game due to a knee injury, the Trojans eventually lost Slovis to leg cramps during the third quarter. In his place, Matt Fink went 4-for-6 for 45 yards and led one field goal drive. Slovis returned in the fourth quarter and finished the game 29-for-39 for 432 yards and four touchdowns with one interception.

The sloppy finish to the game takes some of the spotlight away from some outstanding individual performances for the Trojans. Wide receivers Michael Pittman and Amon-Ra St. Brown were phenomenal.

St. Brown finished with 8 receptions for 173 yards, including a 95-yard touchdown. Pittman had a game-high 13 catches for 146 yards. True freshman running back Kenan Christon had a costly fumble, but led the running game with 60 yards on 20 carries, and caught four passes for 82 yards and two scores, including a 58-yard touchdown.

While there were a number of special teams errors throughout the game, that unit did come up big late in the fourth quarter. After an Arizona State touchdown cut the USC lead to 31-26, punter Ben Griffiths flipped the field at the end of a drive that began with an interception returned for a touchdown that was wiped out due to defensive holding. Griffiths, punting from the Arizona State 47-yard line, deadened a punt inside the five that USC cornerback Jayden Williams was able to down at the one. When USC’s defense was able to force a three-and-out, St. Brown fielded a punt and returned it 24 yards to the Arizona State 41-yard line.

Of course, a chop block against USC derailed the ensuing drive, but the field position gained forced the Sun Devils to have to go 90 yards with just 3:29 left on the clock. Arizona State was able to move the ball all the way to the USC 32-yard line before the acrobatic play by Rector finished things off.

While USC piled up 547 yards of offense against Arizona State, much of that came in the first quarter. After USC scored touchdowns on each of its first four drives, the Trojans next nine possessions resulted in one field goal, one interception, one fumble, a turnover on downs and five punts.

Defensively, John Houston led the Trojans with nine tackles, while Malik McClain recorded USC’s only sack of the game on the first drive. Isaiah Pola-Mao, playing in front of friends and family in Arizona, recorded an interception, his second pick in two weeks.

The Trojans again dealt with injuries before and during the game. Nose tackle Marlon Tuipulotu and linebacker Palaie Gaoteote did not play, while the Trojans lost center Brett Neilon to injury on the same play that Slovis left the game. USC’s cornerback depth was tested as well, as the Trojans turned to true freshman Dorian Hewett at cornerback late in the game, and Hewett responded with two huge plays, knocking away an Arizona State two-point attempt following it’s final touchdown, and breaking up a deep ball on the Sun Devils’ final drive of the game.

USC held Arizona State to just 47 rushing yards, 339 total yards and forced three turnovers. But the Trojans also allowed 193 kickoff return yards, committed penalties at inopportune times and couldn’t put enough points on the board over the final three quarters to run away with this one after the strong start.

The Trojans still have an opportunity to finish the season on a positive note, as a trip to Cal next weekend and a home date with UCLA await. USC will take the win against Arizona State, but it was far from the statement it looked like it could be after the first 15 minutes.