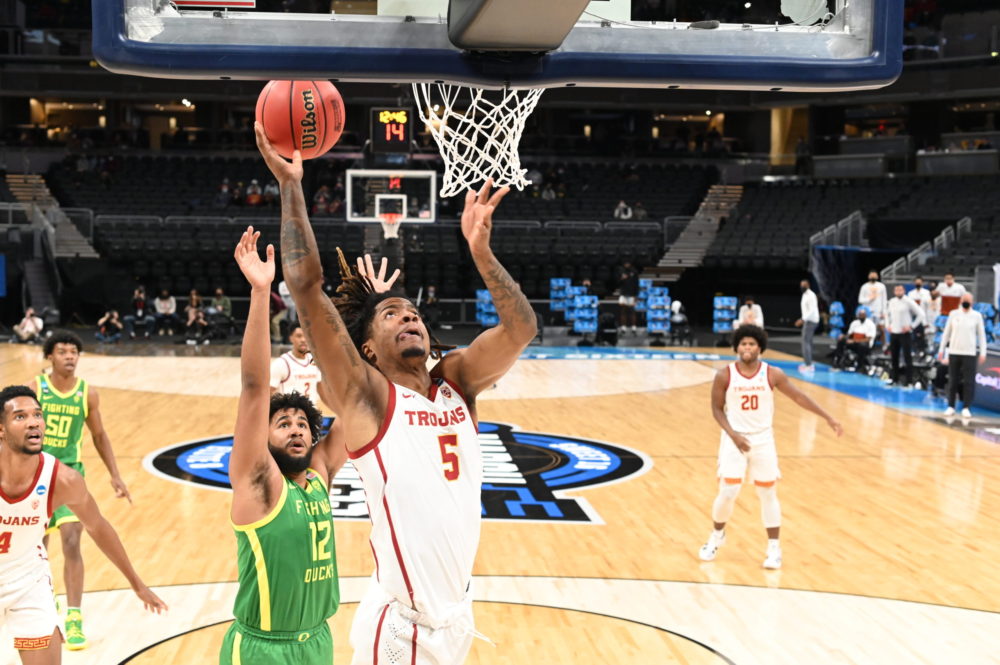 USC is in the Elite 8 for the first time in 20 years, as the Trojans turned a 17-16 deficit into a 33-19 lead through the latter stages of the first half and ultimately cruised to a 82-68 Sweet 16 win over the Oregon Ducks.

The Trojans were led offensively by 22 points from Isaiah White and 20 from Tahj Eaddy, as the two combined to make 15 of 21 shots from the floor, including 7-of-11 from three-point range. But it was on the defensive end where the Trojans shone, as an Oregon team coming off a 95-point performance in a win over No. 2 Iowa shot just 37.7% from the floor and made just five of 21 three-point attempts. USC is the tallest team in college basketball and that collective long reach gave Oregon fits as the Trojans settled into a zone and made things difficult all night for the Ducks.

After USC pushed the lead to 21 with 10 minutes left in the game, Oregon eventually whittled it down to nine with four minutes remaining. An Eaddy three-pointer righted things for USC and Oregon never closed to within double digits again.

The game against Oregon marked USC’s first trip to the Sweet 16 since 2007. Its last trip to the Elite 8 came in 2001, when USC lost to a Duke team that went on to win the national championship.

USC now faces Gonzaga in a game that will tip off on Tuesday at 4:15 pm. Gonzaga was the overall No. 1 seed entering the tournament and has looked dominant during this run, posting three wins by a total of 77 points. The Bulldogs are undefeated this season and looking to become the first time to finish a season undefeated since Indiana in 1976.