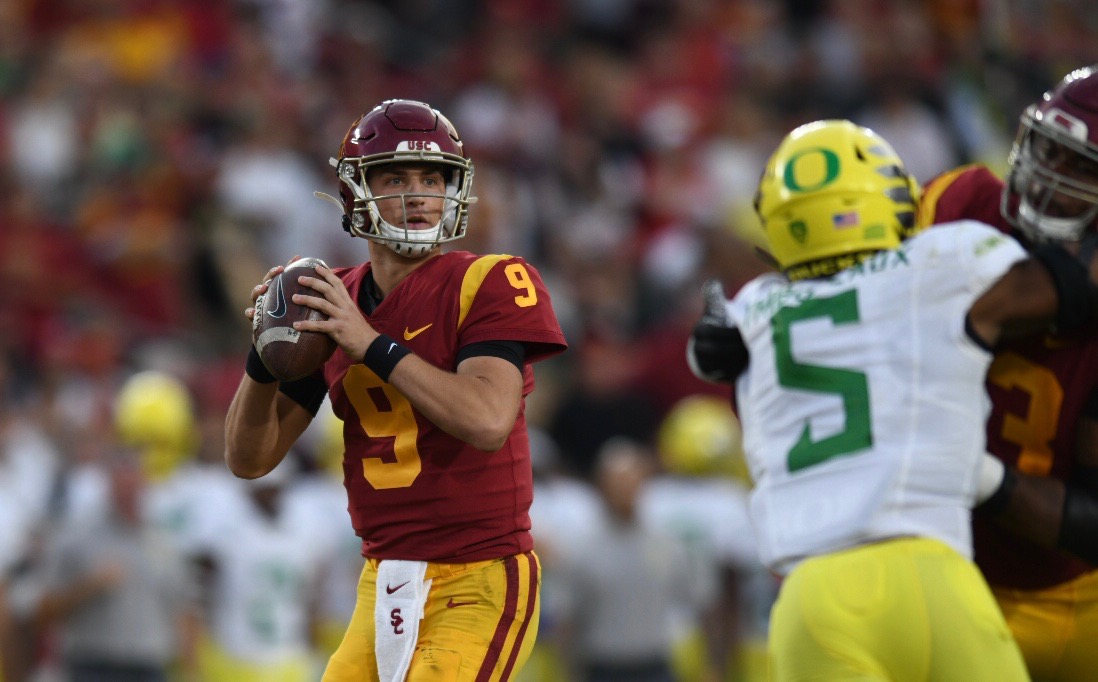 It truly was a case of the good, the bad and the ugly, in that order, for USC during their 56-24 defeat at the hands, feet and arms of the Oregon Ducks.

USC got off to a good start, taking its opening drive 77 yards in 16 plays for a touchdown, then turned an interception by safety Isaiah Pola-Mao into three points, to take a 10-0 lead with three minutes remaining in the first quarter. USC sacked and pressured Oregon quarterback Justin Herbert early and often and looked like they had every advantage against the Ducks offense.

It got bad on USC’s following drive, as a third-and-four pass from Kedon Slovis was deflected into the air by Drake London and intercepted by Oregon safety Verone McKinley III.

From there, it was just plain ugly, as Oregon went on a 56-7 run to put the game away.

Slovis threw two more interceptions (one returned for a touchdown) and fumbled the ball away on a third-and-goal play from the Oregon three-yard line. Oregon turned all four turnovers into touchdowns, and added a 100-yard kickoff return touchdown just before halftime, when it looked as though USC might have been able to take some momentum into the locker room, thanks to a touchdown pass from Slovis to Michael Pittman.

The mistakes were too much to overcome, as Oregon took a 28-17 lead into halftime, despite just 113 total yards against 112 penalty yards.

After the Ducks scored no points on their first three possessions, Oregon scored touchdowns eight-straight times they had the ball (including an interception return and kickoff return for touchdowns) — covering a span from the 12:25 mark of the second quarter to the 6:50 mark of the fourth quarter.

It was a total collapse from the Trojans in all three phases. After starting the game 1-for-5 for -3 yards, Herbert went on a dominant run, completing 14-straight passes and 20 of his next 21, to finish 21-of-26 for 225 yards and three touchdowns. Backup quarterback Tyler Shough then entered and threw a 37-yard touchdown pass.

The only thing that stopped Oregon’s run was their own success, as they eventually were able to run out the clock on their final possession. Fittingly, the final play of the game featured Oregon’s backup quarterback leveling a USC defender on a run play that bounced outside.

Oregon finished the game with 405 total yards, converted 6-of-9 third down situations and held the Trojans to just 91 yards rushing.

When the dust settled, Oregon had made a significant statement about where the two programs reside in the Pac-12 pecking order, as the Ducks are virtually guaranteed a spot in the Pac-12 championship game representing the North, while the Trojans are now behind Utah in the South.

It also very much calls into question Clay Helton’s future as head coach of the Trojans. Reports swirled Friday that USC will soon announce the hiring of Mike Bohn as the Trojans new athletic director. This was not the performance or the trajectory that Helton wanted to show an incoming athletic director, where one of the first orders of business will be to decide which direction to take with the head football coach.

Following the game, no USC assistant coaches made themselves available to the media.

This was a chippy game throughout, as a number of Oregon players are Southern California natives and looked to make a statement back in Los Angeles. Jaylon Redd (Rancho Cucamonga High School) scored a two-yard rushing touchdown and caught four passes for 31 yards. Mycah Pittman (Calbasas) caught three passes for 36 yards and a score. Mykael Wright (Antelope Valley) returned the kickoff for a touchdown and had a pass breakup. Kayvon Thibodeaux (Oaks Christian) finished with four tackles and a sack. Deommodore Lenoir (Salesian) returned an interception 45 yards and had five tackles. Thomas Graham (Rancho Cucamonga) had four tackles including a tackle for loss.

With their Pac-12 South destiny wrestled out of their control, the Trojans now must gather themselves and travel to Arizona State next week.

During the post-game press conference, Clay Helton was asked why he is the right coach to continue leading this USC program.

“I’ve been here 10 years, and I believe in being a servant to this university and to the young men that are here,” Helton said. “Each and every day I wake up and represent them and our school, and I will continue to do that each and every day. And I’ll fight like hell for the next win with the people that I believe in and the people that I love until they ask me not to do it anymore.”