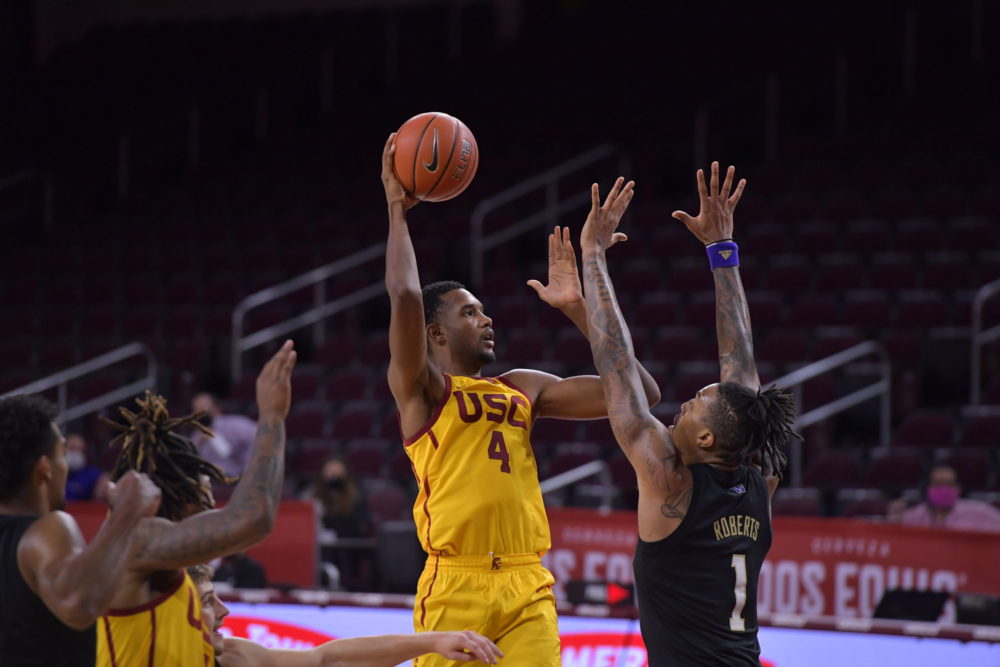 The USC Trojans made their first eight shots and never looked back in a 95-68 win against the Washington Huskies on Thursday night. USC led 44-23 at the half, built the lead to 30 and won comfortably.

USC point guard Ethan Anderson made his long-awaited return after missing extended time due to a back injury. USC coach Andy Enfield said that Ethan has had only one full practice and was on a minutes restriction, playing seven minutes in each half. Enfield expects Ethan to play similar minutes on Saturday. Ethan was fouled on a successful drive to the rim and converted the free throw for his only points.

USC had the usual starting lineup and they all scored in double figures except for Isaiah White, who had 9 points. Chevez Goodwin also scored in double figures for the Trojans, as they made 31-of-61 shots from the field and 7-of-19 (37%) from three. After two games in which the Trojans couldn’t make a three, Tahj Eaddy made two early shots from beyond the arc, which seemed to loosen up the Trojan shooters.

The Trojans appeared somewhat disinterested early on Tuesday against UCR, but in the return to conference play on Thursday they were very focused the entire game. The Trojans played well on both ends and the large lead allowed end of the rotation players to get some game experience. In a game in which the Trojans showed why they are now 10-2 and 4-1 in Pac-12 games, it also was clear why the Huskies have struggled through the first half of the season.

They made 8-of-32 shots in the first half, and though they shot better after intermission, the game was already over. Simply said, the Huskies are a poor shooting team without a go-to scorer and struggle to play coach Mike Hopkins’ zone. USC had no trouble getting the ball into the middle of the zone and had a large number of easy shots and dunks.

The Trojans Found Their Outside Game And Dominated On Offense

USC needed to prove to themselves that they can make shots beyond the arc, and they did. Tahj made 2-of-4, Drew Peterson 2-of-5 and Noah Baumann 2-of-6 from three. Isaiah Mobley made his only three point attempt. Enfield liked what he called “a good team effort”. He added that it was nice to see some threes go thru the net.

“We have good shooters. They need to have confidence and make good decisions,” Enfield said. “Tahj, Drew and Noah each passed up an open three and I told Drew that he has to take wide open threes.”

It was clear that Enfield was relieved that the Trojans made some shots.

Isaiah Mobley had a very good night on the offensive end, making 6-of-9 shots and scoring a career high 18 points, one more than brother Evan. Isaiah added four assists. Evan was 6-of-10 and 5-of-7 from the line. He also had six rebounds and for the second game in a row had more boards on the offensive end than on defense. Evan also contributed three assists and two blocks.

In the first several minutes the Trojans turned the ball over six times and then tightened up and finished with only 10 turnovers for the game. They outscored Washington 22-6 in fast break points.  Several times one of the Mobleys brought the ball up court after a rebound and found the other inside from near the foul line against the weak UW zone. The Trojans finished with 20 assists.

Drew continues to be a stat stuffer. He made half of his shots and all four of his foul shots for 14 points and led the team with seven rebounds. Chevez finished with 12 points, making half of his 10 shots and grabbed six rebounds.

In opening up an early big lead and maintaining it all night Enfield wasn’t forced to play his starters big minutes. Evan played a team high 27 minutes. Boubacar Coulibaly played six minutes and Reese Waters four. Josh Morgan was in sweats. Enfield said Josh has a slight injury and may be available Saturday.

The only negative for USC was at the foul line. They made 26-of-37 (70%) which is better than their season average but lower than the last few games. Most of the misses came from Isaiah Mobley (5-9) and Chevez (2-5).

The Huskies do not have the size to get inside for easy shots against the Trojans. They had their best stretch on offense at the beginning of the second half when they made their first three shots and drew a foul on the fourth possession. The UW leader point guard Quade Green struggled all night. He finished 2-of-11 for five points along with three assists and six turnovers.

With a much better second half UW finished 22-of-58 (38%) and 9-of-23 (39%) from three. Most of their scoring came in the first few minutes of the second half and late, long after the game was decided. These percentages are a little higher than the Trojans’ season defensive numbers but when it mattered the Trojans locked up the Husky offense.

Guard Erik Stevenson may be working into a bigger role for UW. Coming off a big game against Cal, he struggled against the Trojans in the first half and had three turnovers at the break. He heated up in the second half and finished 6-14 including half of his 8 three point attempts and finished with 16 points.

Former Trojan J’Raan Brooks was a non factor. He scored eight points but didn’t get a rebound and in six minutes in the first half missed his only shot and had a turnover.

The Trojans also out rebounded the Huskies by 10 and had nine steals.

Max Agbonkpolo Continues To Struggle With His Shot

Max played 20 minutes and looked good on the defensive end. He had five boards and two assists, but missed all three of his shots. It feels like he is pressing and needs a couple shots to fall to start being a factor on offense, but if he doesn’t start scoring his minutes will likely decline. He is too good a player to not find his stroke. In 17 minutes a game he is only making 33% of his shots and a dismal 18% from three.

USC shook off the poor performance on Tuesday and dominated a weaker opponent. They are now 10-2 and 4-1 in conference play. The success of this season will likely be decided by how they play against the better Pac-12 teams. So far they are 2-1, beating Arizona and Arizona State and losing to Colorado. They play the Arizona teams again, have one left against Colorado, play Oregon once, and have two games against both Stanford and UCLA.

Not many teams can say they have had the two best centers in their history in successive seasons, but that is clearly the case for USC. Back in the day, UCLA had Lew Alcindor for three years and son after Bill Walton arrived for three more. In those olden times freshmen could not play on the varsity and players could not leave early for the NBA. Under those rules the Trojans would be a national power today.

On a similar note, I asked Coach Enfield after the game whether grad transfers can return next year.

He replied: “The way I understand the rule is that this year does not count for eligibility. I may be wrong, but I believe grad transfers can return.”

If he is right, many teams could benefit, including the Trojans. Evan will obviously leave, but it is at least a possibility that Isaiah and the three grad transfers could return. Add to the roster the new recruiting class and this would be a loaded team. It also means that Drew Peterson could play two more years. The impact of the Covid virus can’t be overstated, but then again, perhaps there will be a big benefit to Trojan basketball.