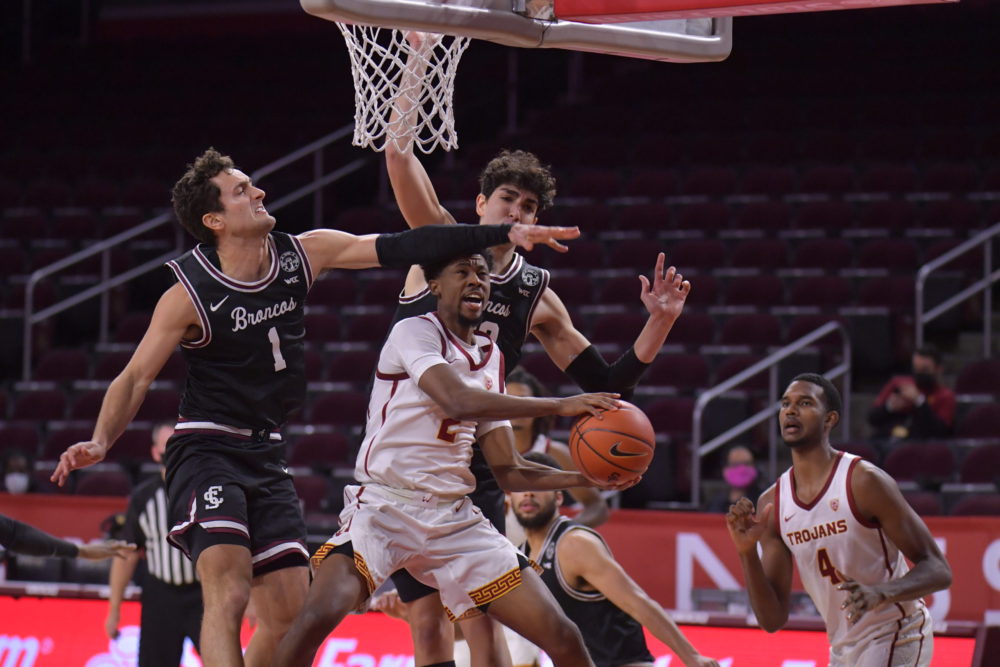 No one involved with or a fan of Trojan basketball knew what to expect Tuesday afternoon. USC had not played a game in three weeks and had only one full practice and two walkthroughs in that stretch. To make things even more difficult, USC’s opponent switched over the weekend when LMU cancelled basketball activities and the Trojans quickly scheduled Santa Clara.

None of these potential difficulties mattered on Tuesday night. USC handily beat the Broncos 86-63, clearing the bench in the final few minutes. The Trojans led wire to wire; they led by 14 at the break, though the margin felt bigger. USC quickly extended the margin to 20 in the first minute of the second half and the lead stayed in the low 20’s for most of the rest of the game. After the game, Coach Enfield admitted he “thought it was a little risky to play Santa Clara” on short notice, but the players wanted to play.

“This was not a tuneup game,” Enfield said. “Santa Clara is a very good team and could have beaten us.”

Ultimately the coaching staff decided it was more important to get a real game in before beginning conference play, even though that leaves USC with only one full day to prepare for Colorado.

The Trojan Defense Was Outstanding.

Santa Clara made 36.7% of their shots and were 1-17 from three. Enfield liked the defensive aggressiveness. “The defense was good when it needed to be.” The players “executed our defensive assignments the entire night….They retained our defensive principles,” even though they had only one day to prepare for the Broncos.

Max Agbonkpolo defended smaller and quicker guards most of the time when he was in the game and generally did a good job staying in front of his man and harassing the Bronco guards with his length and long arms.

The Mobley brothers and Chevez Goodwin all played very well. The Mobleys combined to shoot 12-16 from the floor, grab 14 rebounds and block 5 shots. They both made a shot from beyond the arc. This was arguably Isaiah’s best game as a Trojan. He made the first two shots in the game, one from about 12 feet and the other a follow up after an offensive rebound.

Enfield said that Isaiah has been shooting the ball very well in practice.

“He played a terrific all around game,” Enfield said. “He is not being knocked off balance near the basket.”

Enfield expects Isaiah to continue to improve and noted that he scored at the rim and made a mid range shot and a three.

Chevez Goodwin also had his best game at USC. He was 5-8 from the field and had 5 rebounds. Enfield said that “Chevez runs the floor and is extremely physical. The front line did an outstanding job.” USC outscored the Broncos 44-26 in the paint, continuing a pattern established in the first five game. In six games they have outscored their opponents by 84 inside.

Ethan Anderson did not dress for the game. Enfield said that Ethan “still has a slight back issue” and is day to day. He could play this weekend, though Enfield implied that it is unlikely. Isaiah White got the start in Ethan’s place.

Enfield also officially announced that Drake London will not join the team.

He had a tremendous football season and Enfield said it makes sense for Drake to concentrate on football.

There were two new players on the bench and they both played in the last five minutes. Freshman Reese Waters made a three and a mid range shot and showed that he will be an offensive force over his Trojan career. On an inbound play under the offensive basket Reese was the inbound passer which would indicate that he knows at least some of the plays. He also handled the ball for a short time when both Tajh Eaddy and Drew Peterson were not on the court.

Reese is not a point guard but he is a very good shooting guard and has great size at 6’5”. Enfield said that Reese played well on defense though it appeared he was lost on a couple Bronco possessions and wasn’t sure of his assignment.

Josh Morgan came into the game with Reese and played his first minutes as a Trojan. He is very athletic and runs the floor well. After the game Enfield said that under the one time transfer rule in effect this season Josh can play without using up a season of eligibility. For now Enfield sees Josh providing additional front court depth and implied that he would likely not have a major role this year.

Boubacar Coulibaly played limited minutes. It is becoming apparent that as he plays more basketball he will develop into a talent. He made a nice shot inside the lane.

For The Most Part The Trojans Shot The Ball Well

Neither team made a shot from three in the first half, though the Trojans had only one attempt. They finished the game 7-14 from three, the second game in a row in which they made half of their threes. It appears that many opponents will focus on the Trojan inside players which will result in some open looks outside.

The Trojans even made their first six free throws, but that didn’t last. They finished 11-18 from the line. There were so many positives in this game that it’s tempting to overlook a few negatives, but there were some. Besides the routinely poor foul shooting the Trojans did not dominate the boards as much as expected, especially on the defensive end. This has been a recurring problem.

Drew Peterson picked a good time to have an off game, since his scoring wasn’t needed. He missed his first 7 shots and finished 2-11.

The Trojans did a great job protecting the ball in the first half with only four turnovers at the break. They finished with 13, several coming in the last minutes. They also had only 13 assists. Without Ethan, the assists will come predominantly from Drew and the Mobleys.

Isaiah White did a lot of stretching and yoga. He spent time with his wife and baby and tried to stay positive. Like the rest of the team, he really wanted to play this game.

Isaiah Mobley said he picked up yoga during the break and did a lot of reading. He also did some exercises every day and played video games with some of the guys to keep up the team chatter and chemistry. Overall he said it was a tough period.

Conference play begins Thursday night with Colorado in town. The Buffs lost to Arizona on Monday night in Tucson 88-74. Very late in that game star point guard McKinley Wright limped off the floor with a right ankle injury. After the game coach Tad Boyle acknowledged that he “probably” should have taken Wright out earlier. There hasn’t been a follow up report, though Wright was limping noticeably when he went to the bench and then to the locker room. Without him, Colorado is a much different team. If Ethan doesn’t play and the Trojans are playing man defense, the Trojan who has the best chance to keep up with the very quick point guard is Tajh, though he is not a great defender.

The Trojans needed this game against Santa Clara and needed a good performance. If you didn’t know the team had been barred from team activities you would not have guessed it watching this game. It’s a testament to the players and coaches.

One last note. Two years ago when Santa Clara beat the Trojans at Galen in OT, a Bronco guard named Tajh Eaddy scored 21 points. Tajh is probably the only Trojan ever to beat the Broncos and also play for them when they beat the Trojans.