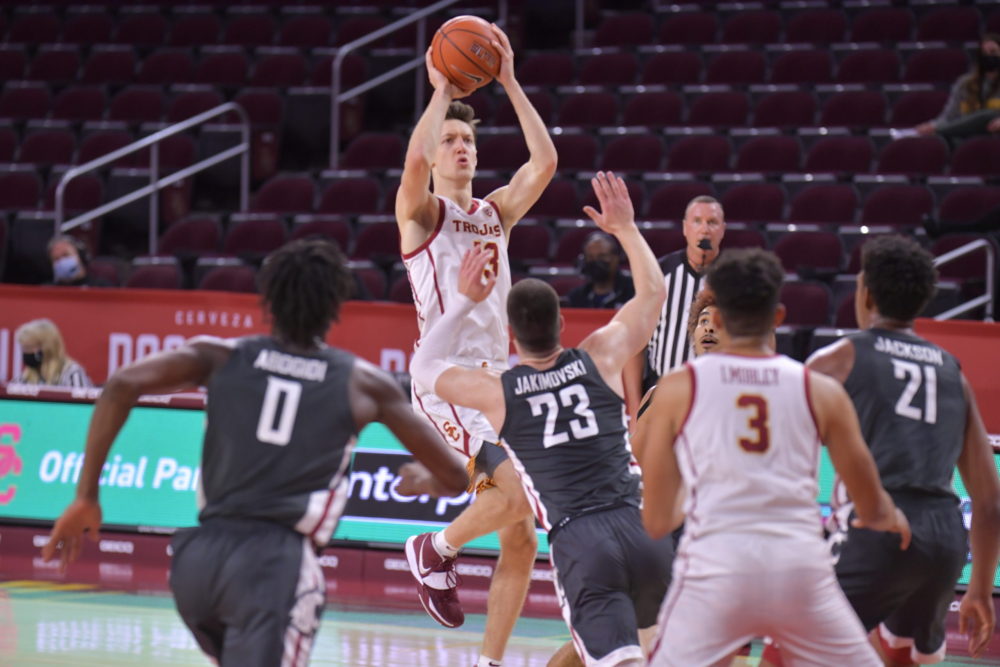 In a game that went off script in almost every fashion possible, the Trojans struggled and clawed their way to an 85-77 home win over Washington State on Saturday night.

Earlier in the day we got a glimpse of how tough this conference race may be when UCLA overcame a 10 point halftime deficit to beat a one-win Washington team by five. On Thursday, the Trojans overwhelmed the Huskies and the Bruins beat the Cougs by 30. With the win over WSU, USC reaches the mid-point of this year’s more limited 27-game schedule with an 11-2 record and second place at 5-1 in conference games.

The Trojans led wire to wire, though the second half looked like a different game than the first and a lead that once was 15 points was cut to four before the Trojans closed it out. The half time score was 39-27; WSU did not have an offensive rebound at the break and two players had 22 of their 27 points. The Trojans turned the ball over only three times in the half and it felt like this would be a big win and allow players who don’t regularly play to get some minutes. The second half was a completely different game. The Cougars scored 50 points against what had been one of the best defenses in the nation.

Evan Mobley picked up his fourth foul in the middle of the second half and played only 30 minutes; his brother Isaiah also had foul trouble. During a stretch in the second half the Trojans went “small” which meant 6’9” Chevez Goodwin was the only “big” on the floor. The Trojans version of small ball is different than perhaps any other team in the country. Chevez was joined by 6’9” Max Agbonkpolo, 6’8” Drew Peterson, and 6’7” Isaiah White during several key minutes. Tahj Eaddy and Drew Peterson took over the game in the last few minutes on the offensive end and led the Trojans to the sweep of the home stand and their sixth win in a row.

The Defense Struggled After Intermission

WSU made 55% of their shots in the second half and out rebounded USC by three; 7 of those boards were on the offensive end. For the game the Cougs finished 28-57 (49%) from the floor and 8-23 (35%) from three. The Cougars even blocked two more shots than the Trojans. Points in the paint were about even, 40-36 in the Trojans favor, which was unexpectedly close. Coach Enfield pointed out that WSU made some very difficult shots including two floaters which almost hit the top of the backboard before dropping in and a banked three point shot. With both Mobleys on the bench the Cougars had a clearer path to the rim and more success on the boards.

During a timeout with the lead cut to four Enfield said he “raised my voice a little bit to make sure the team played harder and finished strong.”

After the game Enfield said that in their two losses USC scored only 4 points in the last seven minutes. Against WSU the defense tightened up and the Trojans were able to score enough to avoid this game coming down to the last seconds.

Enfield said USC switched defenses back and forth from man to zone which helped for short stretches but with Evan on the bench they are a different team on the defensive end.

The three returning players from last year scored only 13 points — six by Max and seven by Isaiah Mobley. New players scored the other 72. The most remarkable aspect with this team is how quickly they’ve learned to play well together, even with a shortened preseason practice schedule.

The Trojans made 32-69 shots (46%) and 6-19 (31%) from three against a team that has relied on its defense to win. Isaiah White scored the Trojans’ first five points on the first two possessions on a three and an inside shot and USC got off to a quick start by making six of their first seven shots. Tahj’s two threes in the first half also helped key the halftime lead.

Tahj finished with 21 points on 8-13 from the field. He added 3 assists with only one turnover. “Tahj has played big, big minutes” Enfield said. “He is more of a scorer than a lead guard but he is getting better.” Tahj acknowledged that this was his best scoring game though he said he is focused on taking what the defense allows and making the right play and keeping things simple. “I want to effect the game is as many ways as possible.”

Drew played a team high 35 minutes and scored 15 points. He made 6-15 shots and 1-3 from three. He also had 3 assists and led the team with 11 rebounds, three on the offensive end. Drew said that they didn’t change anything in the last several minutes. “I like to fill up the stat sheet. I’m not a natural scorer like Tahj and I’ve been working on rebounding the last few games and helping out the bigs”.

Evan scored 16 on 6-11 from the field and 4-7 from the line. He collected a team high 4 assists (tying his brother) and 2 steals and 2 blocks, but only 3 rebounds. His brother Isaiah scored 7 points on 3-9 from the floor and 1-3 from the line. He had 4 rebounds, 4 assists, and a block without a turnover.

Isaiah White finished  with 13 points including his only two attempts from beyond the arc. Max Agbonkpolo played 15 minutes and made two of his four shots but missed his two attempts from beyond the arc. He added 3 assists and made 2-3 from the line. He showed his tremendous speed and athleticism for a player his size on his two baskets at the rim, one on a fast break where he beat smaller defenders down court and the other when he blitzed thru the lane.

Ethan Anderson played 10 minutes and Enfield said he expects Ethan to play more next week. He added that Ethan is pain free but has had only limited practice time with three games this week and he is working into game shape. Noah Baumann played only 5 minutes, perhaps a signal of where some of Ethan’s minutes will come from.

Only Eight Turnovers But Huge Problems At The Foul Line

The Trojans limited their turnovers to single digits which was very encouraging against a good defensive team. The Cougars scored only 7 points off USC TO’s while the Trojans scored 24 points from WSU turnovers.

Regardless of how well the Cougs shot, this game was close for only one reason: USC had 11 more free throw attempts but made only two more from the line. WSU was not red hot from the line 13-18 (71%), but the Trojans were almost beyond description bad. For most of the game they were under 50% as a team and wound up 15-29 (51.7%). As the season has progressed there is a sense that this team will lose a game or two because they can’t make foul shots. It hasn’t happened yet, but they can’t be sure how long their luck will hold.

Enfield reminded everyone after the game that the team has been much better from the line in the last several games, which is true. That doesn’t excuse this performance and the coaches must be frustrated beyond description while watching one brick after another. Chevez was fouled on a shot and had two free throws. The first was an air ball, well short of the rim. The second bounced hard off the backboard, missing the rim by a foot to the right.

There will be some ugly wins over the course of a season for any team which wins a lot of games. Still the games against UCR and WSU could cause one to consider if the Trojans are living too close to the line. We will find out more when the Trojans play three road games next week at Oregon State on Tuesday, Stanford on Thursday and Cal on Saturday.

Perhaps I need to swallow a statement I recently made about the conference officials being much better this season. Isaiah White was fouled on the way to the rim in the second half and the officials reviewed the play to see if it was a flagrant foul. In slow motion it looked like he was barely touched in the back as he went up and it appeared the foul call itself was questionable. Yet after a long review the officials concluded it was a flagrant foul. The Pac-12 refs who everyone up and down the conference have learned to ridicule are back.

The week 6 winner is a very close call. After a ballot recount when supporters of Drew and Evan both questioned the results, Drew Peterson is the winner. The Trojans likely don’t win the UCR or WSU games without either of them. In the three games Drew scored 41 points, added 21 rebounds (the team rebound leader in the last two games) and collected 8 assists. Equally as important, he made key shots and plays late in both of this weeks’ close games. Evan was also very good, finishing with 53 points and 20 boards. The decision came down to the extraordinary effort of a wing to lead the team with 26 rebounds while scoring 41 points (Any complaints should be directed to the WeAreSC editor).