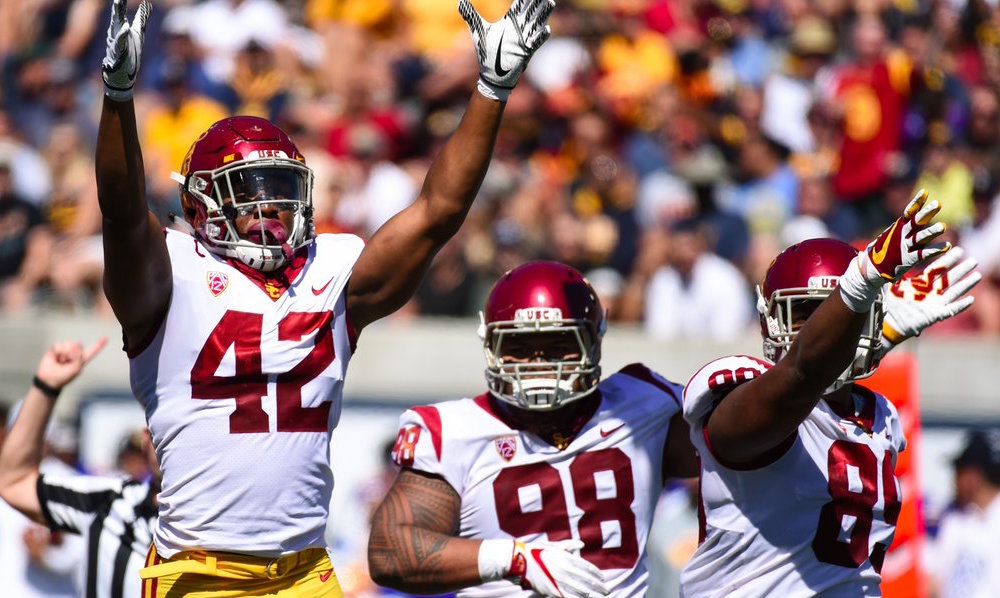 For the third time in four games this season the Trojans found themselves in a dogfight on Saturday with an opponent – this time Cal – that most assumed they would have little trouble disposing of heading into the contest. But just as in those other three instances, it was Clay Helton’s squad that made all of the big plays late, and No. 5 USC pulled away from the Golden Bears in the fourth quarter to win by a final score of 30-20, pushing the Trojans to 4-0 (2-0 Pac-12) on the young season.

Missing a pair of regular starters in tailback Ronald Jones II (quadriceps) and wide receiver Steven Mitchell (groin), the Trojans offense, once again, appeared out-of-sync at times, going just 6-for-15 on third-down plays, and 0-for-2 on fourth-down situations.

But thanks to a solid performance by a Trojans defensive unit that forced six turnovers, not to mention another outstanding showing by walk-on freshman placekicker Chase McGrath, who connected on all three of his field goal attempts, USC was never out of contention to run away with a victory.

Cal had a 3-0 lead early in the first quarter when the defense came up with their first big play of the day when cornerback Jack Jones picked off Ross Bowers’ pass after it was deflected by defensive tackle Josh Fatu, returning it 15 yards to the Golden Bears 38-yard line. Five plays later it was McGrath who drilled a field goal from 37 yards out to make it a 3-3 game.

The Golden Bears would answer with a 12-play, 60-yard drive that was capped by a fourth-down one-yard touchdown plunge by Vic Enwere in the second quarter to take a 10-3 lead. But then Sam Darnold and Co. would come right back with an excellent drive of their own, going 74 yards in 8 plays, with the heralded Trojans passer hitting Tyler Petite for a 16-yard touchdown pass to tie the game up at 10-10.

USC and Cal would each add a field goal just before the half, and the game would remain a 13-13 deadlock all the way until the fourth quarter, and that’s when the Trojans took over.

Just two plays following another McGrath field goal – this one a career-long 46-yarder – that put USC in front 16-13, the Trojans defense came up clutch when Josh Fatu forced Bowers to fumble, with Uchenna Nwosu diving to recover the fumble on the Golden Bears three-yard-line. Two plays later Stephen Carr punched it into the end zone, and all of a sudden USC had a 23-13 lead.

Things would get worse for Cal in a hurry when safety Ykili Ross intercepted a deep Bowers throw down the middle of the field, returning it 49 yards to the Golden Bears 33-yard-line. Six plays later the Trojans would reach the end zone again when Darnold connected with Deontay Burnett on a 4-yard touchdown pass, giving USC a commanding 30-13 lead.

For the game, Darnold would finish 26-of-38 passing for 223 yards and two touchdowns with one interception. Burnett led the Trojans with nine catches for 76 yards, and Carr paced the team with 82 yards rushing on 20 carries.

Cal would add a late touchdown to cut the deficit to 10-points with less than two minutes remaining, but it was too little, too late.

Jones would come up with his second interception of the day late, and Chris Hawkins would add a pick as well, while Marvell Tell and Cameron Smith tied for the team-lead in tackles with 12 each.

The Trojans, which have now won 13 consecutive games, will be on the road again next week when they play at Washington State on Friday night.