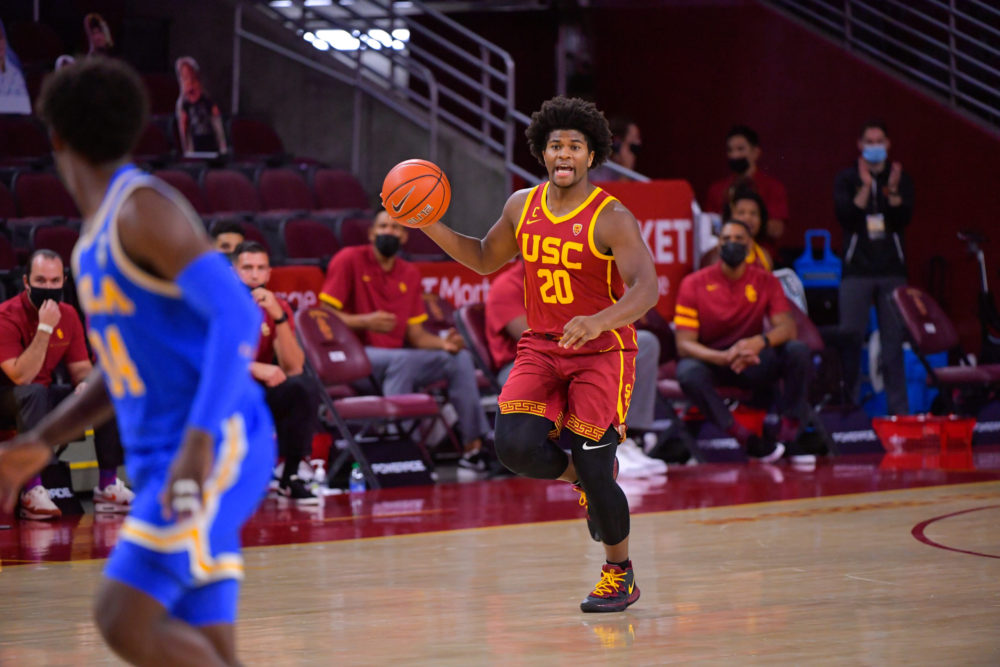 This game was strange even before it started. Less than an hour before game time UCLA announced that starting big man Cody Riley would miss the game due to an ankle injury. At the same time they announced that Jalen Hill, the first big off the bench, would not play because of “personal reasons.” The Bruins were at a size disadvantage even with those two players and their absence left UCLA with a smaller lineup. Even so the Trojans’ big front court did not dominate. The 66-48 victory was won on defense, outside shooting and keeping the Bruins off the foul line. Evan Mobley scored only 9 points on a night when most assumed he would dominate inside. Instead, it was the three point shooting of Ethan Anderson and Tahj Eaddy that led the USC offense.

The Trojans won both games this week to begin the tough set of second half of conference games. USC is now 15-3 and 9-2 in conference play and are tied with the Bruins at the top of the conference. Coach Enfield said: “We are excited to be where we are at 15-3” and then immediately followed with coach speak about how there are still a lot of games to be played. To be exact there are nine regular season games left; this was a big week with two good Q1 wins.

The Bruins have lost two of their last three games and will likely fall out of the top 25. The Trojans should be ranked in the next AP poll and will climb in the NET rankings; they were number 20 before Saturday’s games. The two LA schools will meet again at Pauley in the regular season finale on March 6.

There Were A Number Of Strange Stats In This Game

The Bruins started very seldom used big man Kenneth Nwuba, a red shirt sophomore who had played in only three games and was 0-3 from the floor in 22 minutes this season. He gave way to 6’9” freshman Mac Etienne who played well in his first game. Etienne made 4-5 shots and finished with 5 rebounds.

With the Bruins lacking any experienced front court players it was expected that the Trojan bigs would dominate on offense but that was not how the game played out. The Mobley brothers took only ten shots between them and scored 14 points. They played well defensively and combined for 20 rebounds, 5 assists and 4 blocks.

Both teams struggled to score in the first half. The Trojans left the floor with a 30-20 lead, though for a second it looked like it would be larger before Noah Baumann’s three point shot was ruled to be a shot clock violation. The Bruins were held scoreless over an almost six minute span late in the half and USC pulled away and were not threatened again. Surprisingly the Trojans took 34 first half shots and 19 were from beyond the arc while the smaller Bruins took 29 shots and 9 were from three.

The trend continued in the second half. For the game USC made 23-56 (41%) and 9-26 (34%) from three. Coach Enfield said that the Bruins surprised the Trojans by playing a zone defense most of the game which they had rarely played this season. He added that his team had not worked on their zone offense in three weeks. The zone worked to the extent it helped neutralize the Trojan size on the offensive end but in the second half Ethan Anderson and Tahj Eaddy made several threes and the Bruins had no answer.

Enfield said that the Trojans shut down a Bruin team that in some metrics was in the top 50 on offense. Johnny Juzang was the only Bruin in double figures with 13 points but he made only 6-21 from the floor. The Trojans blanketed Bruin point guard Tyger Campbell who came in leading the conference at over six assists per game and scoring in double figures. He was held to 7 points on 3-10 shooting and 4 assists.  Enfield thought that Campbell was a big key for UCLA and the Trojans used their length to bother him all game.

The Bruins needed to score from outside to have a chance but none of their shooters had a good game. USC had a large rebounding margin for most of the game, especially on the offensive boards, but in the last several minutes after the game was long over the Bruins got several offensive rebounds.

The Bruins game plan was to spread the floor with four guards and test the athleticism of the bigger defenders. The strategy didn’t work; none of the Bruins scored effectively.

Holding UCLA to 48 points is a big accomplishment. In the famous 1969 “stall” game before there was a shot clock the Trojans beat the undefeated and Lew Alcindor led John Wooden team by two. USC held the ball for long stretches without taking a shot yet they scored as many points as the Bruins did in this latest cross town game. The Trojans are now 3-0 against Mick Cronin coached Bruin teams.

Ethan came off the bench again and scored 19 points. He made 7-12 shots including 5-7 from three and added a nifty driving reverse layup along the baseline. Enfield said “Ethan played tremendous basketball at both ends and has really improved his shooting.” Ethan was easily the best player on the court in the second half.

Tahj also produced on offense with 16 points including 3-8 from three and in a key stretch of the first half his scoring kept the Trojans in front.

Enfield said that whenever the Trojans face a zone there will be open shots from the outside and they need the guards to make those shots.

Ethan Has A History Of Back Problems

The Trojans didn’t know for sure if Ethan would return this season from his back injury. Enfield said they were hopeful and he also talked about Ethan’s mental toughness.

After the game Ethan said that he had back problems in high school. When he was injured in December the doctors couldn’t determine exactly what was wrong. They gave him a set of stretches and other exercises and now he knows what he needs to do to keep the pain away. His back still hurt a lot in the first couple of games last month but now he is playing pain free. He said that he is still getting into shape defensively.

Ethan told people all summer that the Trojans had added some big time transfers and Tahj added that it felt very sweet to be on top of the conference after being picked to finish sixth in the pre season poll.

“We looked at each other and said no way,” Eaddy said. “This is what we expected.”

Ethan’s previous career high was against the Bruins at Pauley last year. “In rivalry games every possession is like life and death. UCLA switched all five positions on defense and we were looking for mismatches.”

Enfield talked about Evan’s solid play, finding open teammates and blocking shots on the other end. He has said after a few games that Evan is all about the team and not individual numbers.

The “personal reasons” explanation for Hill’s absence in what was UCLA’s biggest game so far this season leaves plenty of room to wonder. Family issues? Unhappiness with his playing time or the coaching staff?  It’s similar to the recent unexplained absence of Stanford’s Ziaire Williams.

In one of the rare moments that Bill Walton was talking about basketball he said that the PAC 12 has excellent referees. If there was any doubt before that comment there can’t be any now; he used too much of something at too many Greatful Dead concerts.

It’s on to Washington next Thursday and WSU on Saturday.

In a very close contest, Evan Mobley is the Week 9 player of the week. Evan made 8-13 shots against Stanford and 7-7 from the line for 23 points along with 11 rebounds. Against the Bruins he played an excellent all around game and wasn’t needed to do as much scoring. He made 4-6 shots and 1-2 free throws for 9 points to go along with 9 rebounds, 3 assists and 4 blocks