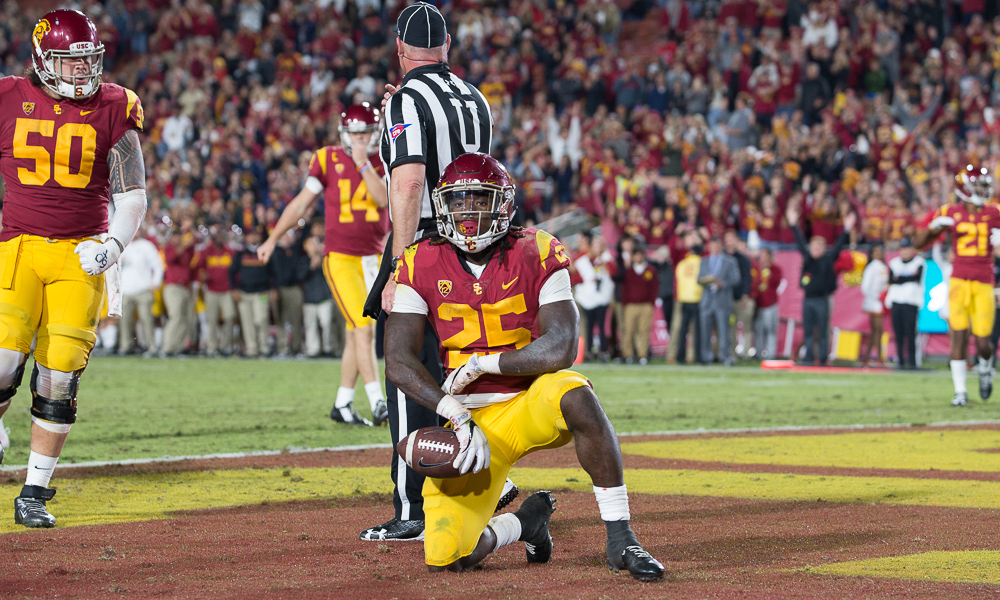 With the Trojans offense sputtering throughout a portion of the night, and the secondary struggling to defend against the Bruins’ Josh Rosen-led passing attack, there were instances when it looked like UCLA was on the verge of seizing control of what wound up being a tightly-contested game until the very end.

Thanks to some clutch plays by a USC defense that racked up four sacks and two key turnovers, however, and an offensive attack that came through when it counted most late, that never happened.

It was the USC special teams, though, that made the first big play of the game in the first quarter. With the Bruins punting, Ajene Harris faked a return to the left side of the field when the ball was actually headed to Michael Pittman Jr. on the other side. Pittman caught the ball with plenty of open space in front of him, and thanks to some key blocks, he darted into the end zone to complete the 72-yard return for a touchdown.

UCLA would answer in a hurry, with Rosen directing a seven-play, 80-yard drive that he finished off with an 11-yard touchdown pass to Jordan Lasley that tied the game at 7-7.

The Trojans would respond on their next offensive series to grab the lead back, as Ronald Jones II capped a six-play, 56-yard drive with a two-yard touchdown plunge to put USC in front 14-7.

The Bruins appeared to be on the cusp on tying the game back up just before halftime. But with UCLA driving in Trojans territory, Malik Dorton jarred the ball loose from Rosen, with John Houston Jr. making the recovery.

The Trojans turned around and had a chance to put some points of their own on the board late in the quarter, but with USC at the UCLA 14-yard-line, Darnold tucked the ball and ran, but he was stopped at the five-yard-line and time expired.

The USC defense came up with another big play early in the third quarter when Marvell Tell intercepted a  Rosen pass in the end zone after the talented passer had marched the Bruins down the field on their first offensive possession of the second half.

The Trojans would convert that turnover into seven points when Darnold ran into the end zone for a two-yard touchdown on the ensuing drive.

But UCLA would score the next 10 points of the game on another Rosen-to-Lasley touchdown pass, as well as a 26-yard J.J. Molson field goal, and all of a sudden USC’s lead was cut to four at 21-17.

Darnold and Co. would answer, however, putting together a 10-play, 90-yard drive that was capped by Jones II’s second two-yard touchdown run of the night to extend

The Bruins added another Rosen-to-Lasley touchdown with less than three minutes remaining in the game. UCLA failed on the two-point conversion attempt, but trailed just 28-23. The onside kick attempt was caught by Matt Lopes, however, and the Trojans were able to run out the clock from there.

Darnold finished the game 17 of 28 passing for 264 yards with one interception, and he rushed for one touchdown on the ground. Steven Mitchell Jr. paced USC with four grabs for 56 yards.

Jones II led the Trojans with 122 yards and two touchdowns on 28 carries, although it was somewhat of a disappointing performance by the USC rushing attack as they amassed a total of just 153 yards total – against a UCLA defense that was allowing an average of over 300 yards.

The victory is the third-straight for the Trojans over their crosstown rivals.

Up next for USC is the Pac-12 championship game in two weeks.