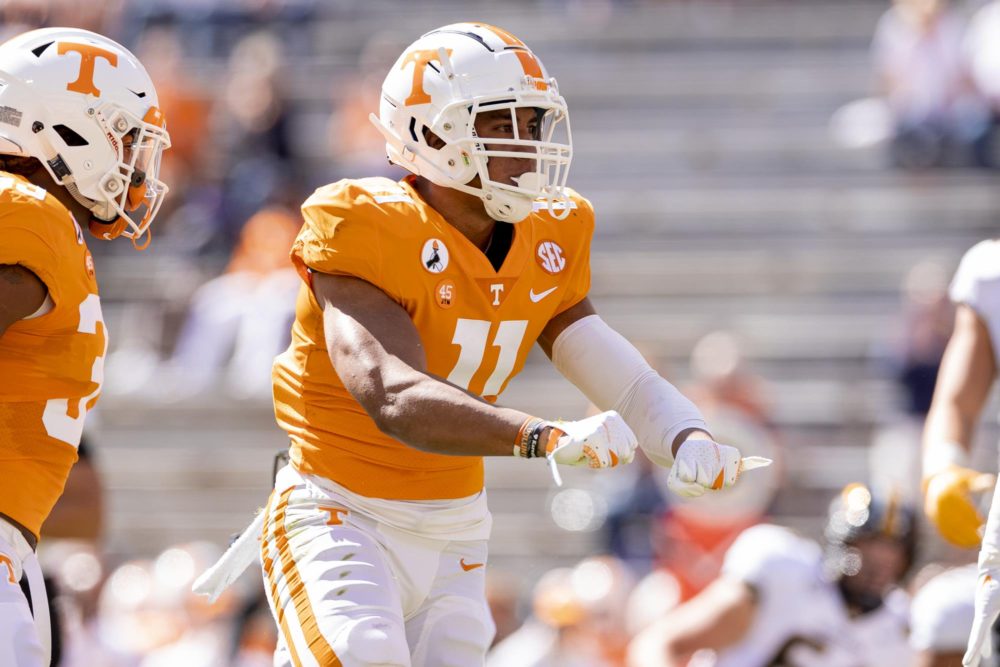 The transfer portal has officially changed college football recruiting as wave after wave of players have made themselves available to be contacted by other programs in the hopes of finding a new home to relaunch their career or put on the finishing touch of a final season.

According to a report, there are 825 active names in the transfer portal that have been added since December 1 of last year. The total number of potential targets is much more than that.

The best way to build a strong recruiting class is always going to be to hit on a majority of your high school signees, but adding a player or two (or three, or four, or five) from the transfer portal is becoming an absolute must in order to fill a need for an immediate impact player or cover a lack of depth potentially created by a transfer of another player.

USC has already landed two players out of the transfer portal for this upcoming season, and both look to have real potential to make immediate and long-lasting impacts.

Defensive tackle Ishmael Sopsher was just a redshirt freshman this past season at Alabama, so he’ll have at least three years of eligibility left and potentially another after that if he takes advantage of the NCAA rule granting an extra year for any athlete based on the abbreviated season in 2020. The 6-foot-4, 330-pound interior lineman will have a shot to take over a starting spot along the USC defensive line this spring, as the Trojans lost both Jay Tufele and Marlon Tuipulotu at defensive tackle and have no clear replacement.

Brandon Pili has shown some flashes and could be ready for an increased role. The consistency hasn’t been there from Pili, but as a veteran with plenty of playing time, he’ll be an asset alongside Sopsher if he elects to use his extra year.

The second transfer portal addition is former Texas defensive back Xavion Alford. He played a hybrid safety/cornerback position for the Longhorns, but USC has a clear hole at safety following the departure of Talanoa Hufanga. USC defensive coordinator Todd Orlando showed that he can be creative in getting a defensive playmaker involved in different ways, as Hufanga produced easily the best season of his USC career this past fall. USC has a couple of talented and experienced nickelback options in Greg Johnson and Max Williams, so it will be interesting to see how Alford slots into this USC defense. He’s another addition with a lot of long-term potential, as he could again count as just a true freshman this coming season since the 2020 season was his first year in college.

But USC coaches hope they aren’t done pulling players out of the portal. It’s clear that an offensive tackle, a running back and more defensive help are on the wish list for the Trojans.

Buffalo running back Kevin Marks entered the portal and might have turned into a more serious target, but elected to return to Buffalo fairly quickly.

USC swung and missed at former five-star offensive tackle Wanya Morris, who left Tennessee and committed to Oklahoma after including USC in his final three potential transfer destinations.

Linebacker Henry To’o To’o signed with Tennessee out of Northern California and the Trojans are hoping they can bring him back to his home state after he joined a number of Tennessee players volunteering to leave the team following a coaching change and the revelation that NCAA penalties are likely headed to Knoxville.

To’o To’o has multiple years of eligibility remaining and would be a major addition to a USC inside linebacker group that was hit hard by injuries last year and struggled to have enough depth for a complete two-deep in several games. To’o To’o did not have USC among his final five choices out of high school, but it is one school he will focus on now. He’s also been linked to Alabama, Georgia and Michigan in the early going of his transfer process.

Tennessee running back Eric Gray is in the portal and could get some attention from USC. Gray was the lead back for the Volunteers as a sophomore last season, as he ran for 772 yards, caught 30 passes for 254 yards and scored six total touchdowns. Gray is from Tennessee and there is no obvious connection to USC, but he’s talented enough and USC has enough of a need at running back to at least gauge his interest.

And staying with the Tennessee theme, offensive tackle Jahmir Johnson is another former Volunteer in the transfer portal. Johnson has just one season of eligibility remaining, but he has experience at left guard and left tackle (he made five starts at left tackle during the 2020 season) and could be a plug-and-play guy there, replacing departed starter Alijah Vera-Tucker. Johnson held an offer from USC coming out of Arizona Western in the 2018 recruiting class.

The Trojans also continue to chase running back additions.

Texas tailback Keaontay Ingram is in the transfer portal and with USC’s Texas connections (Orlando and Naivar coached there previous and running backs coach Mike Jinks has strong Texas ties), the Trojans are a potential destination. Ingram was a junior last season and ran for 250 yards and a touchdown. The 6-foot, 222-pound back is a talented runner and receiver whose carries were cut into by standout true freshman Bijan Robinson last fall.

Michigan transfer Zach Charbonnet is also in the transfer portal and looking at USC as a potential option. He got just 19 carries last season as Wolverines coaches were criticized heavily for not getting the 6-foot-1, 220-pound tailback more involved in the offense. UCLA could also be a potential transfer destination for the former Oaks Christian standout.

If To’o To’o is the top target at inside linebacker, there are a couple of others who the Trojans are at least monitoring — and again, from familiar schools.

Texas inside linebacker Ayodele Adeoye is in the portal and very familiar with both Orlando and Naivar. He was a redshirt sophomore last season and missed much of the year due to a shoulder injury. Adeoye has a history of injuries, so he would potentially be an interesting addition to a group at USC that has been hit by injuries as well.

Tennessee inside linebacker Quavaris Crouch is also in the portal. He and To’o To’o were the heart of the the Tennessee defense this past season. Crouch can play inside linebacker, defensive end and has provided a little goal line running back service as well.

And one player who isn’t in the portal yet, but there are more than a few whispers about the possibility, is LSU cornerback Elias Ricks. He was a “can’t miss” recruit for USC out of Mater Dei (then IMG) in the 2020 class, who wound up at LSU and, surprising nobody, put together a phenomenal true freshman campaign. If Ricks does indeed enter the transfer portal, two potential destinations are Ohio State and USC. He would be a massive addition for the Trojans and an immediate plug-and-play guy at cornerbacks. USC cornerbacks coach Donte Williams would be more than capable of chasing him down, but it’s tough to turn down Ohio State and what the Buckeyes have done with cornerbacks in recent years.