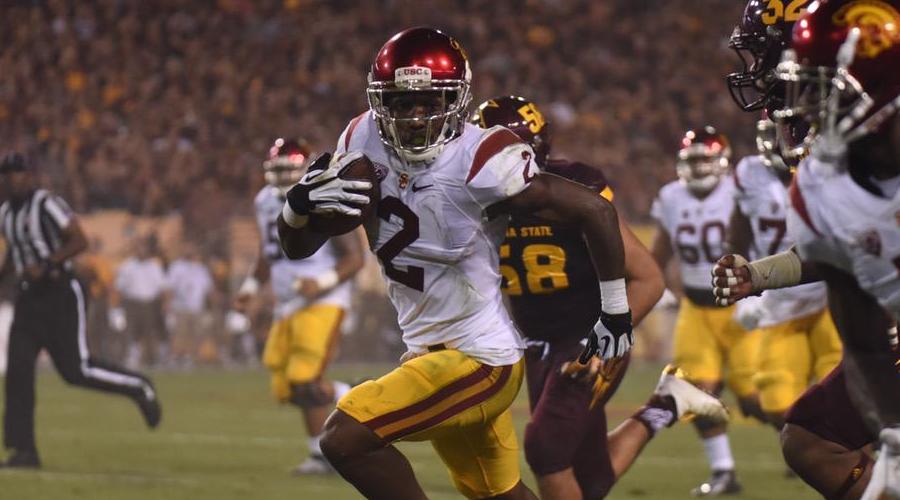 The response is what really stood out tonight.

Yes, the scoreboard said the final score was 42-14 in favor of the Trojans and there are certainly plenty of stats which will show exactly how USC got out to a 35-0 halftime lead over the Sun Devils and cruised to the victory, but more important than anything it was the way the team responded to a tough loss the previous week.

Don’t get me wrong, ASU did a lot to implode and hand this game to the Trojans early on, you can’t argue that. But after the week the Trojan coaches and players just had, where they had to listen to the criticisms and do their own self-evaluations, it’s always important not to take it for granted when you are able to come out and take control of a ballgame from the start, no matter the circumstances.

Things started a little shaky for both sides, with Cody Kessler throwing his first interception of the year after hitting JuJu Smith-Schuster for a long gain on the opening play of the game, and ASU getting a long run and then turning the ball right back over when the running back had the ball knocked loose by his own offensive lineman.

After that, however, things pretty much went the Trojans way. Kessler hit Adoree’ Jackson with a swing pass that went for 80 yards and was helped by a downfield block from Steven Mitchell, Jr. Greg Townsend, Jr. got pressure on Michael Bercovici and it resulted in an interception by John Plattenburg, the first of his career. Kessler later hit Mitchell, Jr. on an outside screen, there was a great block from Isaac Whitney, and Steven went 27 yards for a touchdown.

After the Sun Devils missed their second field goal of the half, Kessler marched the team down the field, thanks in part to a nice run-after-catch by Adoree’, and he found Smith-Schuster in the end zone for a touchdown to make it 21-0.

Not only did the Sun Devils already have two turnovers which SC converted into scores both times, along with the pair of missed kicks, but they also made a couple coaching decisions which played right into USC’s hands.

Normally the Sun Devils are a no-huddle, up-tempo team that thrives on finding that fast-paced rhythm, but in this game they decided to huddle up and slow things down, presumably to try and keep the ball away from the USC offense (a strategy that certainly worked for Stanford last week). The only problem for ASU is that it seemed to throw them out of whack and they never really got things going until it was too late. On defense, they like to blitz and get after the quarterback but Kessler made them pay by simply getting the ball to guys like Adoree’, Mitchell, Jr. and JuJu with quick passes, and then letting those guys get extra yardage with their athleticism.

All of it was working for the Trojans in the first half, and it culminated with a standout play by the defense, and a big play on special teams as well. With USC up 21-0, ASU had the ball at the Trojans one-yard line and looked like they were ready to score and possibly make it a game, but Delvon Simmons got into the backfield and blew up the QB-RB exchange, Chris Hawkins picked the ball up and returned it 94 yards for a touchdown. On the ensuing kickoff, Quinton Powell made the returner pay for bringing the ball out of the end zone with a bit hit that was recovered by Soma Vainuku. Kessler hit Smith-Schuster for a score and the Trojans headed to the locker room with a 35-0 lead.

Steve Sarkisian was quick to remind everyone in the post-game celebration that this was only one game, just as last week was only one game too. He’s right, and it’s not to say it was a perfect game by any means, but it still was nice to see the Trojans respond to the adversity from last week with a performance that has them flying home from Tempe with smiles all around.