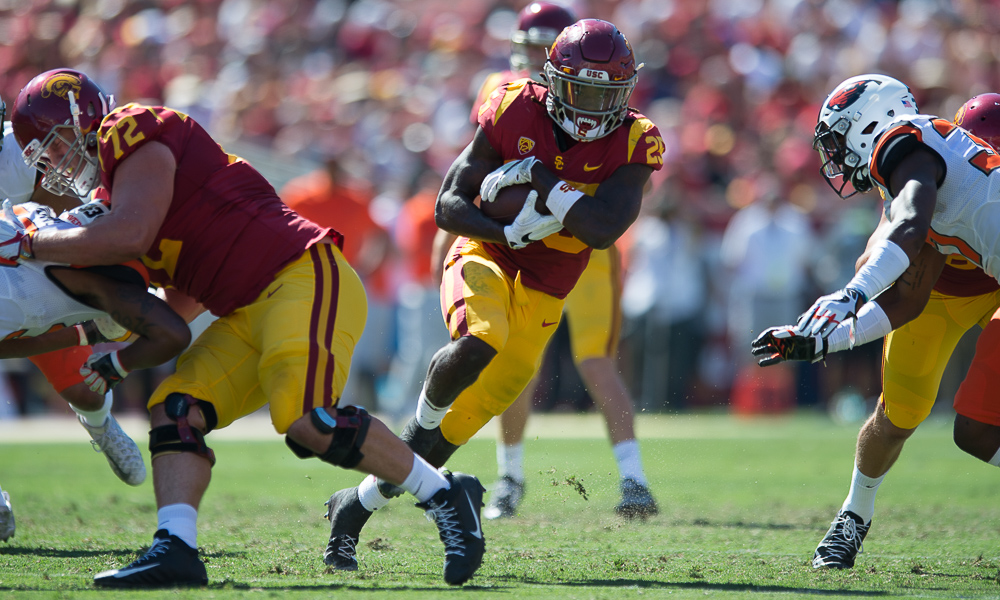 It certainly wasn’t a perfect performance. In fact, it was far from it. But just one week after suffering their first loss of 2017, the Trojans did more than enough on Saturday to come away with their fifth victory of the season, taking down an overmatched Oregon State team 38-10.

In a game in which the USC offense, once again, appeared out of sync at times, Sam Darnold and Co. actually started things off with a beautiful eight-play, 78-yard drive that was capped by a 37-yard touchdown pass to Tyler Vaughns to give the Trojans a quick 7-0 lead.

USC’s fast start would continue. Following an interception by cornerback Jack Jones that gave USC the ball on the Beavers 32-yard-line, the Trojans needed just three plays to get seven more points, as Ronald Jones II darted in from four yards out to give USC a 14-0 lead less than six minutes into the game.

That’s when USC began to run into some problems, first when Ajene Harris botched a punt return, giving Oregon State the ball at the Trojans’ 29-yard-line, and also on a Darnold fumble, with the Beavers recovering on the USC 23-yard-line. In both instances, however, Oregon State was unable to capitalize on the Trojans’ mistake as Jordan Choukair had one field goal attempt blocked by Jones, and he missed another attempt wide left from 37 yards out.

Choukair would wind up converting on his third attempt, however, a 33-yarder that made it a 14-3 game early in the second quarter.

But Darnold and the USC offense would answer with a 12-play, 77-yard drive that the redshirt-sophomore quarterback would finish with a 16-yard touchdown pass to Deontay Burnett, and the Trojans would take a 21-3 lead into halftime.

The Trojans would begin the second half by scoring on their first offensive possession, with Darnold finding a wide-open Josh Falo for a 30-yard touchdown, giving USC a commanding 28-3 lead.

The Beavers scored their first touchdown of the day on the ensuing drive as Artavis Pierce rushed into the end zone from six yards out to cut USC’s lead to 18 mid-way through the fourth quarter.

USC would add ten more points before the game was over, with Chase McGrath drilling a 29-yard attempt, and back-up quarterback Matt Fink racing down the sideline to score on a 51-yard touchdown run.

The day ended on an especially high note for the Trojans as, for the second time this season, long snapper Jake Olson – who is legally blind – entered the game to deliver a perfect snap, with McGrath converting the PAT attempt.

For USC, Darnold finished the afternoon having completed 23 of 35 passes for 316 yards and three touchdowns with one interception. Vaughns paced the Trojans with five receptions for 68 yards.

Jones II was USC’s leading rusher, carrying the ball 12 times for 79 yards, and the Trojans rushed for 184 total yards.

USC will be back in the Coliseum next Saturday to face Utah.