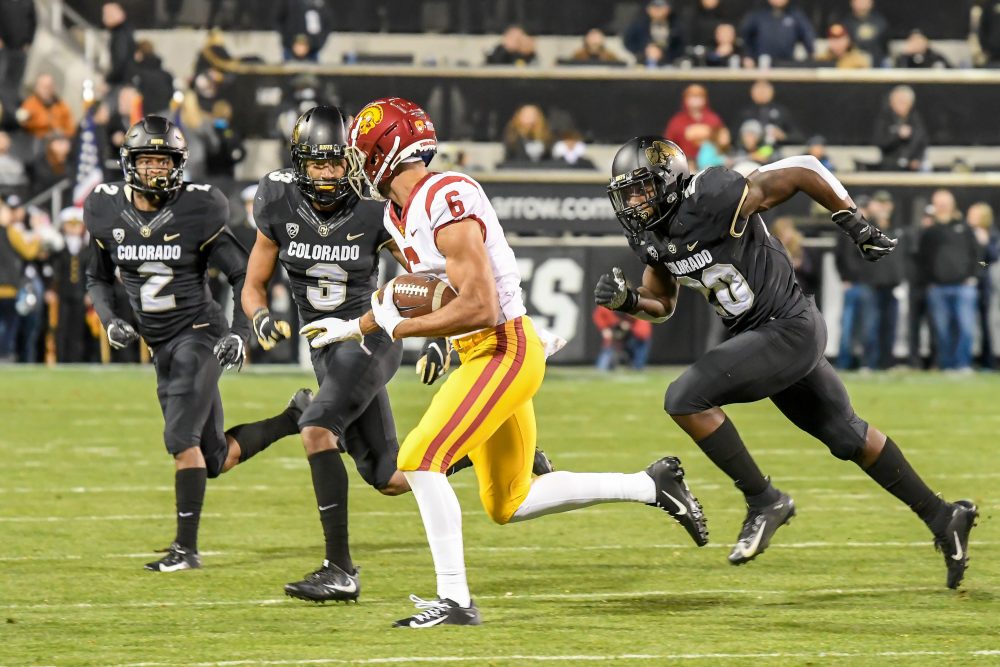 Down by 10 points in the fourth quarter, the USC Trojans looked set to return home with their fourth road loss of the season.

Playing a Friday night game on the road with a roster decimated by injuries, the Trojans found themselves trailing 31-21 heading into the fourth quarter. But they somehow found their way to a 35-31 victory, as USC outscored Colorado 14-0 and outgained the Buffaloes 153-45 over that final period.

We’ve talked all season about how this USC team will not give up in a game, and while the ways in which they put themselves in a 10-point deficit, allowed 520 total yards, lost another turnover battle and allowed Colorado wide receiver Laviska Shenault to tally 189 total yards and a touchdown deserves mention, it still takes a back seat in this particular game to the way the Trojans again faced adversity and were able to rally. Unlike at Notre Dame, where the Trojans couldn’t quite come all the way back, this time USC was able to finish things off.

After a Steven Montez 17-yard run put Colorado up 31-21 with 9:16 left in the third quarter, the USC defense did not allow another point over Colorado’s final five drives. Then, it was time for the Trojans’ offense to step up.

Facing a Colorado defense that had allowed at least 30 points in 12-consecutive games, the Trojans suffered two three-and-outs in the first half that put them in a disadvantageous position as Colorado kept answering with points. Up against it in that fourth quarter, the Trojans turned to senior wide receiver Michael Pittman, who finished the game with seven receptions for 156 yards and two touchdowns.

His first was a 44-yard score that came with 11:25 left and brought the Trojans within three points, at 31-28. His second proved to be the game-winner, as he capped off an 89-yard touchdown drive — a drive he kept alive with a big third-down conversion — by taking a short pass and cutting all the way across the field for a 37-yard touchdown, giving the Trojans a 35-31 lead with just 2:15 remaining.

It was clearly a disjointed performance all around from the Trojans and true freshman quarterback Kedon Slovis and the USC offensive line were rattled repeatedly by many of the pressures Colorado brought. Slovis was knocked around a number of times, lost two fumbles and threw an interception for the first time since the BYU game. But despite taking those shots and sporting an obvious limp, Slovis finished 30-of-44 for 406 yards and four touchdowns against that one interception.

Of all the throws, a beautiful strike down the seam to Drake London for 19 yards on a 2nd-and-20 play on that final scoring drive might have been his best. It picked the Trojans out of a deep hole he’d helped create with a fumble the play before. USC converted the third-and-1 for a first down and Pittman was celebrating in the endzone four plays later.

It was a big day for the Big 3 wide receivers for USC. Tyler Vaughns finished with eight catches for 104 yards and a tremendous touchdown on a back-shoulder throw that he muscled away from a defender and spun into the endzone. And Amon-Ra St. Brown finished with five catches for 55 yards. He also spent time in the backfield, helping a USC running game that was without its top three tailbacks. St. Brown’s first carry of the game went for a 37-yard touchdown and he finished with three carries for 85 yards.

True freshman Kenan Christon also provided a boost out of the backfield, rushing 14 times for 76 yards. He also caught a three-yard touchdown pass toward the end of the first half that stopped a 17-0 Colorado scoring run.

Defensively, this is probably game film that USC will try to learn from, but might not celebrate — at least the first three quarters. Playing without defensive ends Christian Rector and Drake Jackson, linebackers Palaie Gaoteote and Malik McClain, and defensive backs Chris Steele and Talanoa Hufanga, the Trojans were gashed at times and suffered from poor tackling early on.

Still, the way that unit rose up as the game wore on defied logic. Colorado ran 77 plays to and held the ball for 34:07, and a defense that looked completely gassed after 45 minutes somehow turned into a brick wall over the final 15. There are things to clean up. Defensive linemen got out of their rush lanes at times — something that they did not do against Arizona and quarterback Khalil Tate. Cornerback Isaac Taylor-Stuart took a steep angle against Colorado receiver Laviska Shenault and the Buffaloes turned it into a 71-yard touchdown. And tackling overall left something to be desired. But when it mattered most, the Trojans responded.

USC linebacker John Houston led the team with nine tackles, and fellow linebacker Kana’i Mauga had eight. Defensive end Caleb Tremblay, filling in for Rector, had the only sack for the Trojans, but it was a big one, forcing Colorado to punt early in the fourth quarter, which led to Pittman’s first touchdown.

The Trojans finished with 518 total yards and converted 6-of-12 third down situations. USC was aided by 13 Colorado penalties for 109 yards, as the Trojans were flagged just five times for 50 yards.

Next weekend, USC returns to the Coliseum to take on the Oregon Ducks, in the Trojans toughest test of the back half of the season.