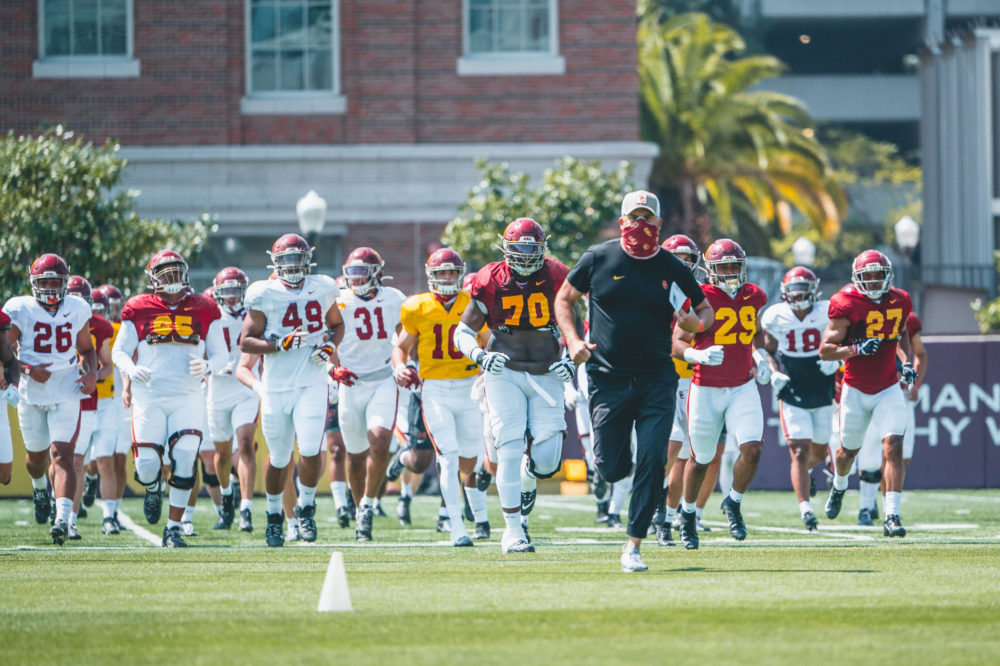 June 1 didn’t just mark the first day recruits could visit campuses after more than a year of an extended dead period. It also signaled USC’s return to the field, as the Trojans took part in some summer conditioning work after a short break following spring ball.

During the summer conditioning work, players are limited to working mainly with the strength and conditioning staff, similar to the winter workouts. Robert Stiner, USC’s Director of Football Sports Performance, drew praise from head coach Clay Helton and several assistants this spring for his work in getting the roster ready for spring ball. He and his assistants will have the summer to get the players ready for a very important fall season in what it means for the trajectory of this USC program. This is also a big summer for the program because last year’s work was so disjointed. The Trojans spent several months not knowing if a season would even take place while working out in a makeshift outdoor gym rather than in the McKay Center weight room. The next eight weeks should provide more of a return to normalcy for the players.

Ingram is likely to factor heavily into the USC offense after he transferred in from Texas this past offseason. There looked to be a three-man race for the top spot on the running back depth chart with his arrival and the return of Stephen Carr and Vavae Malepeai. But Carr made the decision following spring ball to transfer to Indiana, leaving Ingram and Malepeai as two veterans at the top of the depth chart. They’ll be pushed by Kenan Christon and true freshman Brandon Campbell in the fall, but Ingram showed enough this spring to think he’ll have a big role this season.

Jackson is going to be a focal point of the defense and he’ll need to be a force on the edge against both the running and passing games. There were some highlight plays last season, but getting a consistent pass rush or plays in space out of Jackson will be vital for a defense that needs playmakers to step up with the loss of Marlon Tuipulotu from the defensive line and Talanoa Hufanga from the secondary.

London will be a key contributor on offense and one of the most important Trojans on that side of the ball. He now has the ability to play both inside and outside receiver and the offensive staff will look to find ways to get him favorable matchups or use him to create them elsewhere.

Steele will be one of the more important USC defenders this season, not just because he showed significant advancement in his play this spring, but because the Trojans are extremely thin at cornerback in terms of experienced, productive options. Behind Steele and Isaac Taylor-Stuart at cornerback, the position is full of young players who have not been seriously or consistently tested in their college careers. His leadership will also be key in bringing along true freshmen Ceyair Wright and Prophet Brown, both of whom have the potential to be longterm starters and impact players at USC.

It also marked the first day for some new additions to the program, including true freshman wide receiver Kyron Ware-Hudson, who just moved to campus over the weekend.

Ware-Hudson is another strong piece of a very, very talented incoming recruiting class and is a receiver who could be physically and mentally capable of making a pretty quick impressions, which has already been done by Michael Jackson III, who was one of the spring stars as a true freshman receiver.