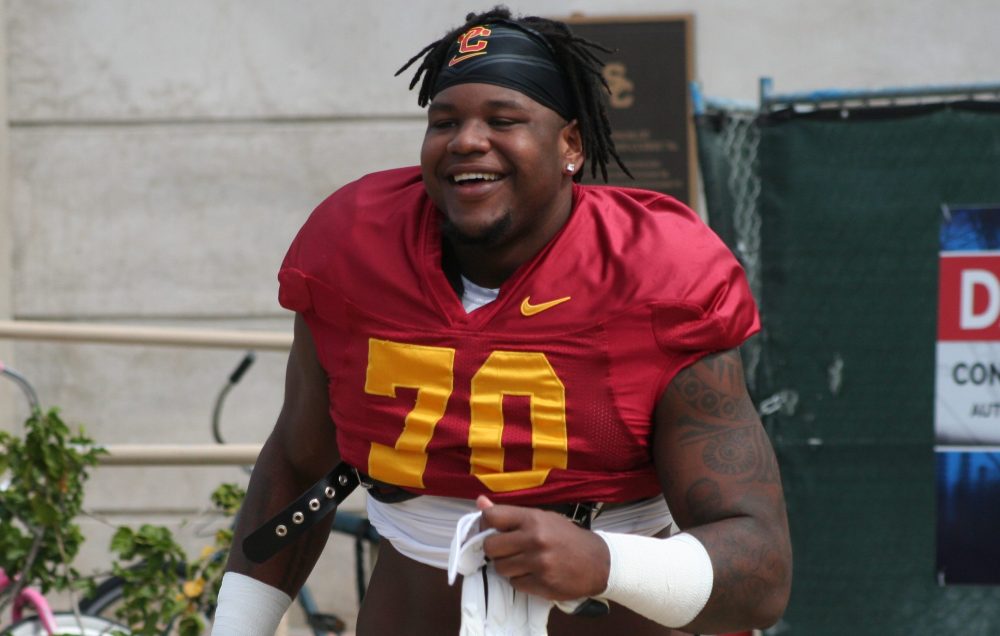 This past week would have been some scheduled time off from spring ball for the USC Trojans football team, as it was spring break. But spring break has taken on a new meaning in the world of COVID-19, as the Trojans (and every other program) have had to put spring ball on a potentially permanent hold, as all athletic activity on campus is currently postponed.

But that hasn’t stopped a number of USC players, who have continued their workouts while at home.

Offensive lineman Jalen McKenzie took to social media to offer a challenge to USC fans, as he ran them through a push-up regimen the team has done during winter conditioning.

McKenzie was not at the first and only spring ball session we were able to see earlier this month, as he had academic responsibilities that day. With the offensive line shifting quite a bit–Alijah Vera-Tucker was at left tackle, Justin Dedich at left guard, Liam Jimmons at right guard and Jason Rodriguez at right tackle–it’ll be interesting to see where McKenzie slots in when the team can ultimately come back together.

Pili will have an opportunity to make a huge impact this season for new defensive line coach Vic So’oto.

The same can be said for defensive end Jake Lichtenstein, who certainly looks physically ready to take on the rigors of working the 5-technique and 4i-technique as USC looks to move between four-man and three-man fronts this fall.

Running back Kenan Christon was set to spend this spring with the USC track team, but now it appears he’ll spend most of it in the gym. Christon was terrific in his true freshman season, and will give the Trojans at least four deep at the running back spot this fall.

And there won’t be a position on the team that will welcome more depth help this fall than the offensive line. USC signed six offensive linemen in the 2020 class and with two walk-ons manning the right side of the second-team offensive line during the first day of spring ball, there will be enough reps for all the newcomers. Courtland Ford is one of the true freshmen who has his eyes set on one of those two open offensive tackle spots, and while it might be something of a longshot for him to jump veteran options in Vera-Tucker or McKenzie, he’s clearly coming in with a mindset to get it done.

And lastly, while it doesn’t have anything to do with football, USC Athletics released a video featuring spring sport athletes discussing their seasons being canceled. The hope is that the seniors will have the ability to gain an extra year of eligibility, and from the responses here, it seems like some would certainly entertain that option.