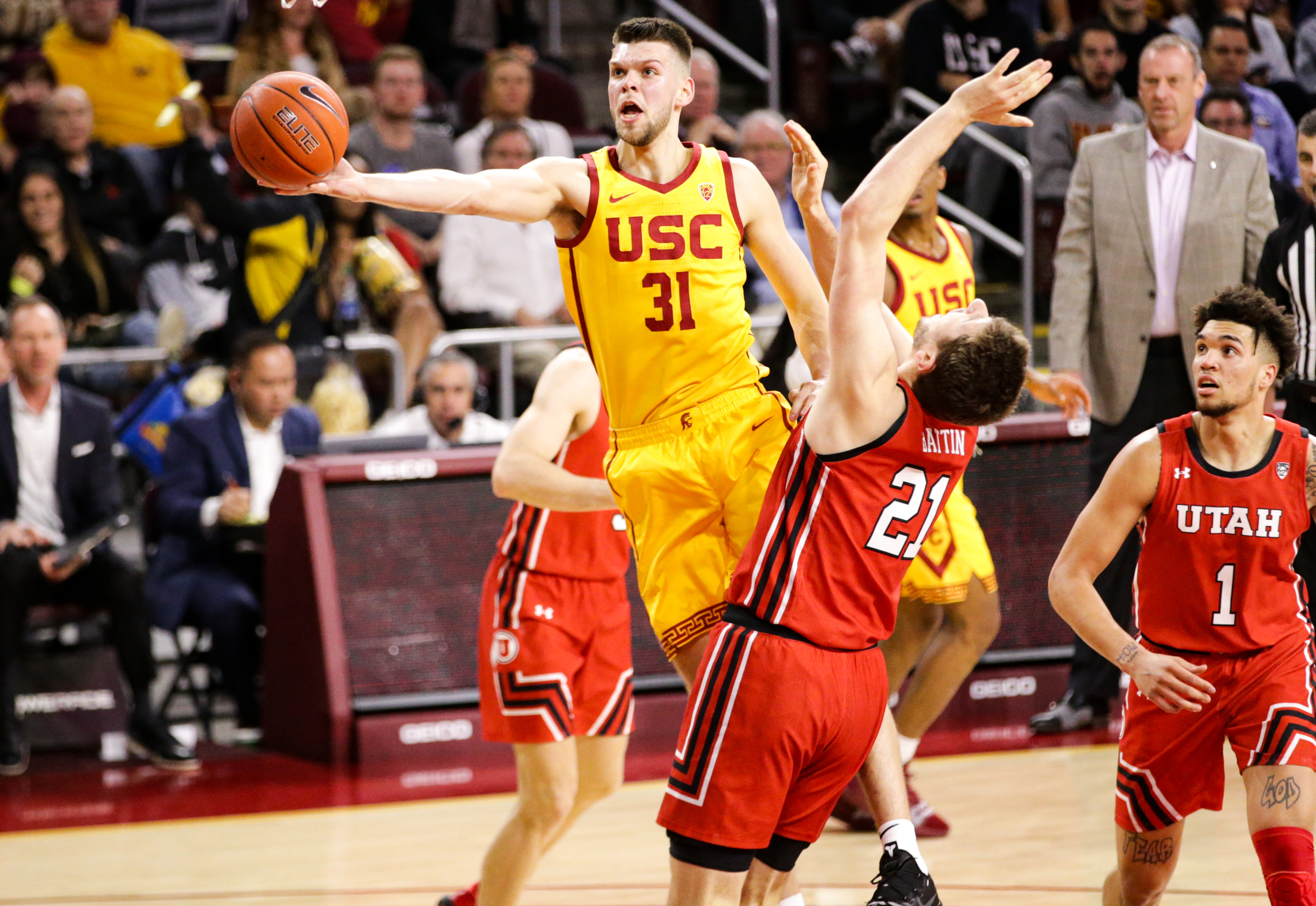 A win is a win, no matter how it looked. The Trojans played great defense all night against the Utes, and did just enough on offense to complete a comeback from 10 down to win 56-52. SC is now 6-2 in PAC 12 play, a half game behind Oregon, and 17-4 overall. The Trojans led for less than five minutes, and the four point final margin matched their largest lead of the game.

This was the Trojans’ worst offensive half in some time. The Utes led 29-23 at the break, and the Trojans were in striking distance only because Nick played a dominating half. He was 5-8 from the field including a three pointer and had 12 points and 5 rebounds. The rest of the Trojans combined for 3-18. After the game Nick said that they were flat early, and that his three point shot opened up his game and got him going. He made shots with either hand around the rim, and played his best game in a few weeks. Nick’s big half was needed; the Utes were 5-10 from three in the first half while the Trojans were 1-8.

Nick said the Trojans are not bothered if they are trailing and “are used to coming back. The team’s motto is toughness.” He finished with 16 points and 15 boards, and his 4 offensive rebounds were the most for either team. On a night when the freshmen other than Onyeka did not contribute very much, the three returning players carried the team. Elijah made 5-8 shots including 2-2 from three and both of his free throws to finish with 14 points. Jonah was only 2-9 from the field but made all 8 of his free throws for 13 points. Big O only got nine shots, but had 11 points, 11 rebounds and 4 blocks. Those four players scored 54 of SC’s 56 points.

The Trojans won with a lockdown defense. The Utes made less than 33% of their shots and 29% from three. Utah star Timmy Allen has held to only 5-20. Several Trojans guarded him, including Daniel, Jonah and Elijah. The Utes used ball screens to get smaller players on Allen, but Ethan and Quinton both did well. SC’s bigs were able to stay with Utah’s quick guards after switches on screens, with Nick being particularly effective.

SC’s slow start marked a return to a pattern which hounded the Trojans earlier in the year. They trailed 14-6 after 8 1/2 minutes. Converting 14-16 (87%) from the free throw line was a big factor in the win. After the game Andy said that Jonah has been particularly good from the line recently, making around 90% of his attempts in the last 5-6 games.

Nick and O made the big plays in the closing seconds to get the lead and the win.  The game was tied when Nick secured a defensive rebound with 41 seconds left. O missed a shot inside with 20 seconds, but Nick tipped it in. O blocked a late Utah shot inside and was fouled. He then made both free throws to lock up the game.

Colorado and Stanford were both upset Thursday night, leaving the Ducks and Trojans as the only teams with only two conference losses. It looks like the race will be tight the rest of the way.

News And Notes From Galen

– Both teams wore warmups with Kobe’s number and Laker colors. Two floor seats with purple and gold bouquets were left empty, and there was a 24.2 second (Kobe’s number 24 and his daughter number 2 combined) moment of silence for those who died in the helicopter crash.

– After the game Elijah said he was a big Kobe fan since he was young, and that the Trojans were playing for Kobe. Nick can be very thoughtful in interviews, and said he greatly respected all that Kobe did off the court, and how much he loved his kids and family. Nick reflected on one occasion when Kobe visited the Trojans. He recalled that Kobe took time to talk individually with each player for a couple of minutes, and that he was fully engaged with each one. Before the game assistant coach Chris Capko said it was very hard to return to practice on Monday.

– Other than Nick, the Trojans were so flat in the first half that one had to wonder if they were looking ahead to Saturday’s game against Colorado

– Over the last half dozen games, Elijah has become a very good slasher to the rim. He can finish with either hand and has a very quick first step when he sees an opening. If he is given too much room, he can also make a three, though his form looks awkward. Andy said after the game that Elijah needs to rebound to become a complete player. In almost 27 minutes, he did not get any boards.

– In practice Big O makes a high percentage of shots from 12-15 feet, but rarely takes that shot in games. The problem seems to be that when he practices he sets up and shoots like a free throw. He is good at the line, but doesn’t have a jump shot and will rarely get an opportunity to shoot flat footed in game action from that range. A good jump shot would make O scary good.

– The lower level student section was full, and the crowd looked larger than the announced 4,400. When the Trojans made their second half runs, there was a lot of noise and energy in the arena. Students and fans were given Kobe shirts which were similar to the warmups the Trojans wore. They were black with a purple “Bryant” and number 24 in gold on the back, and “Fight On Forever” in cardinal in front with a purple number 8.

– Drake London returned to practice on Wednesday. During warmups he completed a very impressive 360 degree dunk, and did it with ease.

– There is talk that SC received a commitment last week from a four star shooting guard for the 2021 class. He would be the second player to commit for 2021, joining 6’10” center Harrison Hornery from Mater Dei.

– The Trojans are still in the hunt for at least two very highly ranked players from the 2020 class. Before the game, Chris said they will also look at some grad transfers, but will be very selective as they were this year. He added that Quinton has been as important as any player on the team by bringing very strong leadership, work ethic and experience.

– According to Chris, Isaiah has really improved defensively over the last month, and that he will be much better offensively before the season ends. Andy said much the same thing after the game, saying that although Isaiah did not have a big game, he is the most improved player over the last month.

– Chris also said that this team has a very “high character. When things get tough, they don’t fold.” After the game, Nick said that they stay together when they get behind 8-10 points. They don’t have any selfish players and they pick each other up if someone is having an off night. He said they are not bothered if they are trailing. They are “used to coming back. The team motto is toughness.”

– Andy said that this was a “big win.” “When you can’t score, you better defend. The seven new players are very tough.” Also, “it is nice to have some rim protection.” He said that Utah is a very good defensive team, and that although SC is the leading rebounding team in the conference, Utah is very good as well.

– Andy also mentioned the several very close games the Trojans have played, including wins over Stanford, LSU, TCU, and now Utah, and the loss to Oregon. He pointed out that Nick made very late tip ins in three of these wins, LSU, TCU and Utah.

– The team needs to start better on the offensive end; Andy said they can’t afford slow starts, especially on the road in conference play.

– “Elijah has been terrific off the bench.”  He “has been playing spectacularly offensively in three of the last four games,” Andy added.

– Elijah said that his role is to be aggressive and bring energy. At the conclusion of the media session, I said that Elijah was also in the media room after the last home game against Stanford, and asked if this would become a new tradition. Elijah replied “maybe,” and immediately began laughing.  Elijah and Nick were still laughing when they walked out.

– Finally, Matt Leinart and his son were at the game. His son looks to already be about six feet.