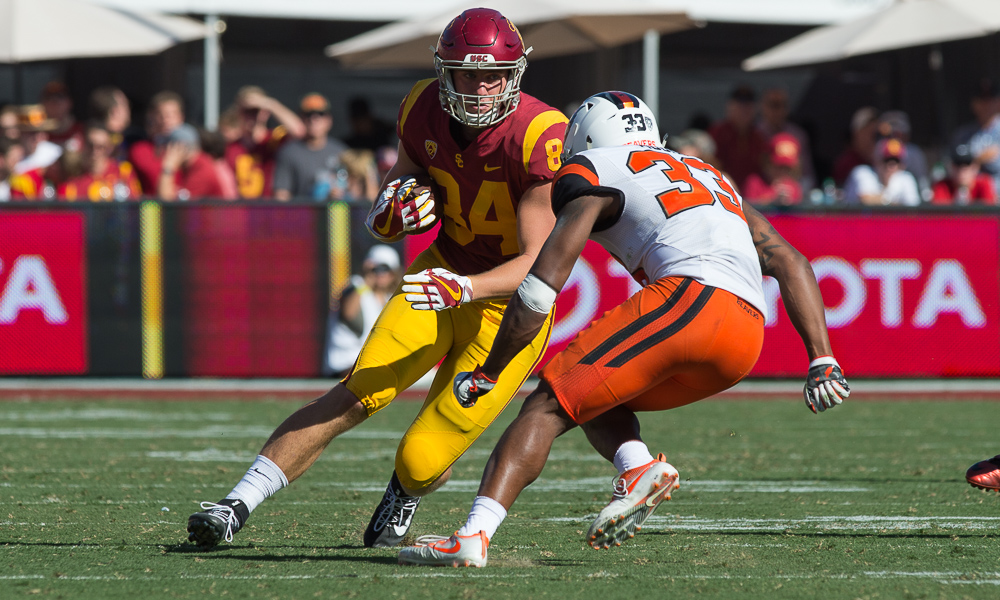 The 15 receptions by USC tight ends during the 2019 season is one of the easier and more striking statistics to recall about last year, especially considering the Trojans threw the ball a lot and had some talented players at the position.

It’s a number that can be explained away a bit. Drake London served as something of a hybrid tight end-wide receiver and gets credit within the program for producing for the tight end position. It was also USC’s first year using Graham Harrell’s Air Raid, with a true freshman quarterback who had established more of a rapport with the receivers, and the position had a coach in John Baxter who was splitting time while coordinating the entire special teams.

But it’s also a number the tight ends are aware of, and have set their sights on obliterating this season.

Tight ends coach John David Baker takes over the group in his first year as a fulltime assistant. He served as a graduate assistant at Abilene Christian in 2014 and 2015, then spent three years as a quality control analyst at North Texas before coming to USC along with offensive coordinator Graham Harrell and spending the 2019 season as an offensive quality control analyst for the Trojans. His familiarity with Harrell’s offense should go a long way in helping the tight end position make an impact this season, and he’s experiencing a familiar feeling this fall, as the Trojan tight ends have mirrored the progress Baker saw with North Texas tight end Kelvin Smith entering the second year of Harrell’s offense with the Mean Green.

“They’ve made plays and been successful,” Baker said of the USC tight ends this fall. “It’s the same thing in Year 2 at UNT. We had a tight end that made it really hard not to put him on the football field. These guys have kind of done the same thing.”

Smith caught seven passes in his first year under Harrell. He caught 27 in the second year, and then 29 in Harrell’s third and final year at North Texas.

USC has three tight ends available right now, though Krommenhoek and Jude Wolfe are the clear leaders right now. Josh Falo is working with the group and Baker said he had a very good practice on Monday, but he’s still working his way back into football shape after missing some time during the offseason as far as working out. The position took a bit of a hit over the offseason, as Daniel Imatorbhebhe elected to transfer after being granted a sixth season of eligibility and USC lost Jack Yary to Washington, after he signed with USC as part of the 2020 class. Ethan Rae is another talented member of this tight end group at USC, though he continues to recover from a high school knee injury that kept him sidelined for all of last season.

This season, the USC tight ends see a major opportunity, as the Trojans need to replace more than 100 receptions from Michael Pittman and USC still doesn’t have the traditional Air Raid stable of receivers as far as pure numbers. Amon-Ra St. Brown, Tyler Vaughns and Drake London are established stars, but there are plenty of questions behind them, and that creates a vacuum that the tight ends can fill.

“When you look at our team right now, we’ve got some really talented receivers, but we don’t have a ton of them,” Baker said. “We’ve got a couple really talented tight ends in Erik and Jude that have put themselves in a position to be on the football field. They earned that right over the offseason and through these first couple weeks.”

Wolfe has been front and center in the photos and videos USC has released from practice, as he had a juggling touchdown catch in the scrimmage and has made big plays downfield in practice as well.

Krommenhoek is looking to put his receiving skills on display as well. He spent this offseason working with tight ends Austin Hooper of the Cleveland Browns and Devin Asiasi of the New England Patriots, and said Green Bay Packers’ wide receiver Davante Adams showed up one day as well. He caught passes from Washington’s Jake Haener and former Washington State quarterback Anthony Gordon, now with the Seattle Seahawks. Krommenhoek said he tried to absorb everything he could in terms of tight end and receiver play.

“You gotta get open; you gotta create mismatches,” Krommenhoek said of the tight end position in football now. “They’re gonna leave you 1-on-1 with those DBs and you gotta win those matchups. That’s not a big part of what the tight ends do.”

Baker was asked about what his group needs to do to see the field more often this season.

“We gotta bring value to us being on the football field,” Baker said. “We have to prove our worth and I would say over the first two weeks of camp, our guys have done that.”

Baker said it comes down to whether the quarterback trusts that the tight ends are going to get open and make plays.

“To me, you see that show up in critical situations, whether it be in a scrimmage or practice,” he said. “Third down situation and everything’s even, and the quarterback is looking our way…I understand what that means. If that’s the case, that quarterback trusts our guys. He trusts our tight ends to make the play. And up until this point, our guys have made those plays. And that’s how you earn your way onto the field…They’ve done that and they need to keep doing that.”

While Krommenhoek has been a solid member of the USC offense for several years and his leadership in the weight room, the locker room and on the field is unquestioned, plenty is expected of Wolfe this season. He dealt with a back injury that sidelined him during spring ball as a true freshman, but both Baker and Krommenhoek raved about his ability and his production so far this fall.

“Obviously he didn’t get to play as much as he probably wanted to last year,” Krommenhoek said of Wolfe. “He’s incredibly talented. I think we’ve seen that the first two weeks of camp. He’s made some great plays…Super explosive. Loves to play, loves to run, loves to hit…I think he’s matured so much in the last 12 months…It’s been really good for us two, to go out there and increase our role in the offense as much as we can.”

At this point, it’s tough to envision how all the offensive touches will be distributed, even with Pittman off to the NFL and so many receptions seemingly available. Head coach Clay Helton and Harrell have talked about wanting a stronger and more dedicated running game. St. Brown, Vaughns and London are certainly all capable of carrying a bigger load this season, and USC also has a group Bru McCoy, John Jackson III and true freshmen Gary Bryant Jr. and Josh Jackson Jr. all likely ready to contribute and having combined for zero catches last season. But there is confidence that the group of tight ends can do more for this USC offense, and they should have a chance to prove it this year.

“Losing Pitt, I think we knew we were going to need to step up,” Krommenhoek said. “I think naturally that was something us as tight ends and when JDB (Baker) became our coach, that was something we needed to talk about. I think we’ve done a good job of making some changes and doing some things to be able to be more of a receiving group and be able to stay on the field for those third downs and not get taken out. I think it’s something we needed to do, and I’m excited to get going here in two weeks.”