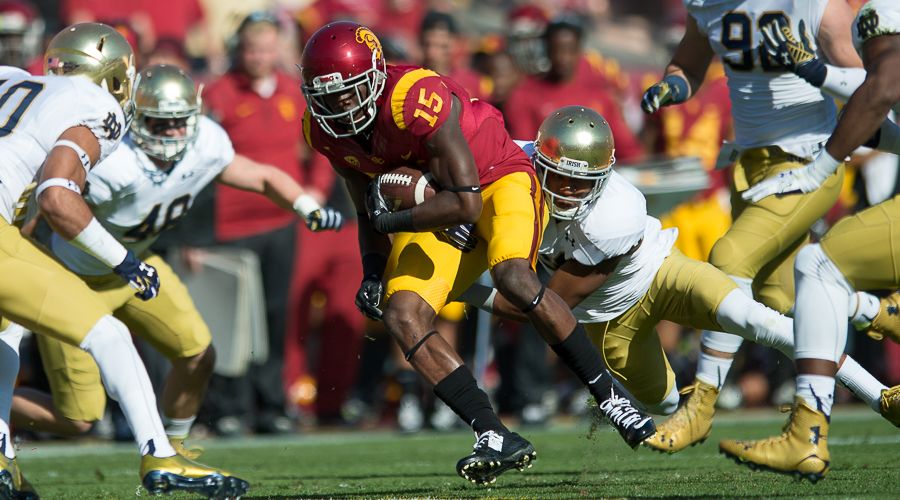 As much as anything, it was the way the Trojans responded.

Every USC person knows what happened in the UCLA game and it was an extremely tough loss to take, particularly for the former Trojan players who made it clear that what they saw in that game was unacceptable for a rivalry performance. Whether it was that motivation, some self-evaluation or a good old-fashioned strong week of practice, the Trojans couldn’t have responded better to the UCLA game than with what they did against the Irish.

Let’s get it out of the way, this was not a great Notre Dame football team. As one former USC assistant coach said during the game, “this is not big man on big man football we’re watching”, in reference to the phrase that legendary Trojan Marv Goux used to described the physical nature of the USC vs Notre Dame rivalry. The 49 points scored by the Trojans on Saturday were their most against the Irish since the 1974 comeback game (55), and it was the 7th straight game that ND had given up 30 points or more this year. USC quarterback Cody Kessler set an all-time Notre Dame opponent record with six touchdown passes. And it could have been worse, Irish coach Brian Kelly said Steve Sarkisian was “very generous” to run the ball in the second half to keep the score where it was.

The fact that the Irish were not at their best takes absolutely nothing away from the way the Trojans came out ready to play. USC was crisp from the start and, to the delight of their fans, kept the foot on the gas the entire way and never let up. It was the kind of complete-game performance that had eluded the team throughout the year and the fact that it finally came in the regular season finale against the Irish was just the cherry on top of the sundae for anyone in cardinal and gold.

There were a string of memorable individual performances for the Trojans. Kessler was on target all day long and notched the signature win of his career. George Farmer had two touchdown catches and showed the deep threat ability that all Trojan fans have been waiting to see. The offensive line reminded everyone once again how much promise they have for the future. And then there were a trio of defensive seniors; J.R. Tavai with 3.5 sacks, Hayes Pullard with a fumble recovery and Gerald Bowman with a pick.

It was notable after the game with the way so many of the USC players went out of their way to comment favorably on the game plan provided by the coaches, and to talk about how the physical nature of the practice week was a critical factor in getting prepared for the game. You know the staff felt the weight of what took place last week and they deserve credit for making the right moves this week.

When watching the players and coaches come off the field with smiles on their faces to the cheers of the adoring Coliseum crowd it was hard to imagine the angst that had been present just one week ago, but that’s the magic of what can happen in a rivalry game when things go right. To paraphrase the words of legendary USC announcer Tom Kelly 40 years ago, it was definitely a Trojan afternoon.