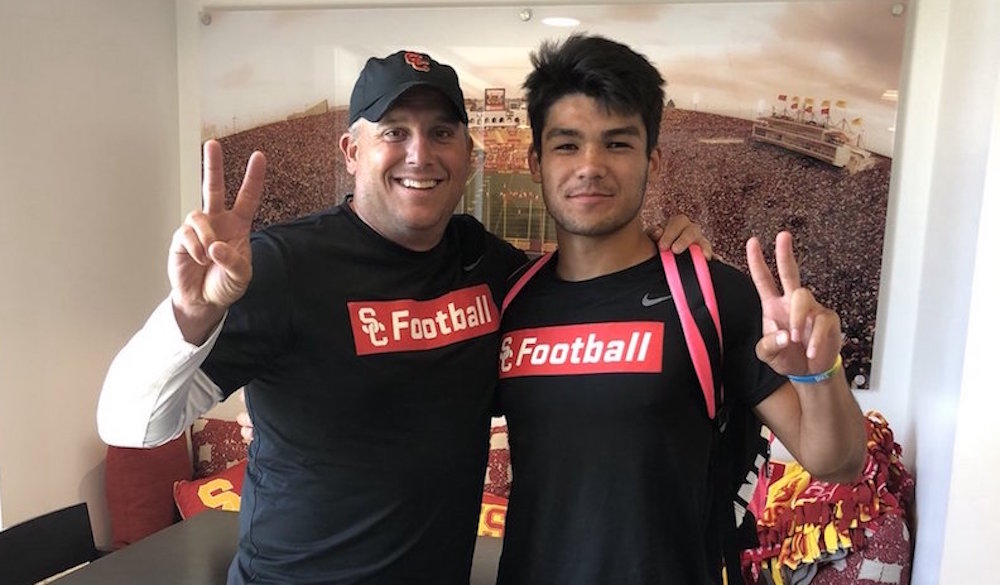 Garry Paskwietz: Erik – Now that the spring evaluation period is done and the June camps are wrapping up, let’s take an overview look at how things stand for the Trojans with the class of 2019, and today we will start with the offensive side of the ball. So far 5 of the 7 USC commits are on offense (assuming Gino Quinones being recruited as an OL) but it makes sense for this class to be top-heavy on offense based on need. Let’s start off with the QB position where it looks as if the coaches want to take two in this class, there is already a commit from Kedon Slovis from Arizona but a recent offer to Ryan Hilinski could prove interesting. Ryan is a pro-style QB who has really raised his game this off-season and he would be my #1 target, even if he is currently a commit to South Carolina. And don’t forget Jayden Daniels from Cajon, he is a guy who could be in the mix as well.

Erik McKinney: Quarterback is definitely the most interesting spot for me in this class because there are so many “known” unknowns at that position. Everybody “knows” that JT Daniels will win the job this fall and that the 2019 quarterback(s) will provide depth for when SC transitions from Daniels to either Bryce Young or DJ Uiagalelei. But you just can’t put any stock in projections at the quarterback spot with recruiting (like how Max Browne was going to be the answer in the 2013 class and Sam Darnold was a bit of an afterthought in 2015), and Ryan Hilinski has absolutely played his way into the discussion as far more than simply added depth in the quarterback room (provided, of course, USC can follow through and flip him from his commitment to the other USC). And like you said, Jayden Daniels is still in the mix as well. While the simple transition from Daniels to the 2020 guy is easy for recruiting fans to envision, we aren’t going to see the coaches sit back and wait for that to happen. There are just too many unknown variables when it comes to quarterbacks, both with development and potential transfers.

GP: Yeah, I’m glad to see the coaches are looking to take two in this class, it just makes sense. I liked Slovis as a development guy, and adding a Hilinski or Daniels would seem to work well. OK, let’s go to running back, where things aren’t so clear. A few months ago I would have had no problem projecting Sean Dollars as one of the two backs to take in this class but things changed quickly and Sean is now a commit to the Ducks. The guy I would put at the top of my wish list is Jordan Wilmore from Lawndale, a Ricky-Ervins type tough runner who is on the shorter side, and I also like Kenon Christon from Madison. There was also an offer this week to Giles Jackson, another speed guy.

EM: Like you, I thought Dollars would have fit really well in this class, especially because the coaches still seem to want that elusive speed back. I think you need two tailbacks in this class (it feels weird to already start preparing to replace Stephen Carr) and Wilmore and Christon have been the names most mentioned. If you toss Markese Stepp in with that pair, it’s a terrific trio that gives you just about everything you need in a backfield.

GP: Moving out to wide receiver, let’s see a show of hands for whoever projected Munir McClain and Puka Nacua (photo above with Clay Helton) as the two WR commits to start off the class. The “big” names have been guys like Bru McCoy and Kyle Ford, both of whom are still out there, and I still like Joe Ngata a lot too. All of those available receivers have size, something the Trojan coaches definitely want to add. But I do like both McClain and Nacua as athletes who can run away from people. Another guy who has intrigued me this spring is Drake London. There is also a scheduled visit this weekend from Theo Wease, currently an OU commit but a guy you would love to add if it works out. I can see the Trojans taking at least 3 receivers, if not 4, in this class.

EM: For me, wide receiver is the one spot where you almost can’t go wrong. Because of 7-on-7 and year-round football there are just so many capable guys at that spot. Obviously when there is a guy like Bru McCoy locally, he’s a top priority. It’s definitely interesting to see McClain and Nacua added to the class when there are some big targets still out there. Wease and McCoy would be Plan A to go along with McClain and Nacua, but any of those other guys you mentioned (even a Sione Vaki, who just picked up an offer after a camp) are potential impact guys at receiver. I’m curious to see if Amon-Ra St. Brown or Devon Williams have an impact on the big name receivers in this class. It would seem like opposing coaches could use the depth chart pitch against USC, even though there is just one receiver left from the 2017 class and the bulk of the 2016 group hasn’t yet established itself.

GP: I think that’s key regarding the depth chart. It’s possible that both Vaughns and Pittman could leave after this year, and they are really the only two established guys on the roster. You figure Amon-Ra adds to that quickly but Devon Williams is raw and it remains to be seen if he will make a Mike Williams-style adjustment to the college game. After that you’ve got Josh Imatorbhebhe, Randal Grimes, Trevon Sidney, Velus Jones and Pie Young as guys who have yet to contribute. OK, let’s go to tight end, where there is as much top local talent as we’ve seen from this position in a while, even with the commit this morning of Michael Martinez to UCLA. I’m not going to lie, I think he’s a good one and I would have loved to add him, but with others like Jude Wolfe (visit this weekend), Ethan Rae and Isaiah Foskey there is still plenty of opportunity to add a pair of really good ones.

EM: Michael Martinez would have been a terrific addition to this class with the need for both tight end and offensive linemen. But if USC walks away with two of the three others you mentioned, they should see it as a win. This seems like the weekend where Wolfe could get locked up, if he isn’t already, and he’s set to commit in early August. Two is definitely the number at this spot in this class though.

GP: And now the offensive line, a huge priority where I think you need to bring in five players for this class, and I would love to see three of them at tackle. Fortunately, this is a good year for tackles, and the Trojans already have a verbal from a good one in Jason Rodriguez. Two other local big names are Jonah Tauanu’u and Sean Rhyan, and I think the Trojans are in solid position for both. This weekend brings a pair of OOS targets in Devontae Dobbs and Stacey Wilkins on official visits, plus there is always the JC option with Malaesala Aumavae-laulau. Where things get interesting is along the interior where there aren’t as many options, and the coaches already took a verbal commit from Gino Quinones, who has been a defensive tackle but projects well to shift to the offensive side of the ball.

EM: Enokk Vimahi, Sataoa Laumea, and Troy Fautanu are a few other options along the line and it’s good to have this many options because this is a crucial year along the offensive line after taking just two in the 2018 class. Getting Tauanu’u and Rhyan to go along with Rodriguez would make this group feel a lot like the outstanding 2017 class.

GP: That is true. And next week we will talk defense. Thanks Erik, see you then.