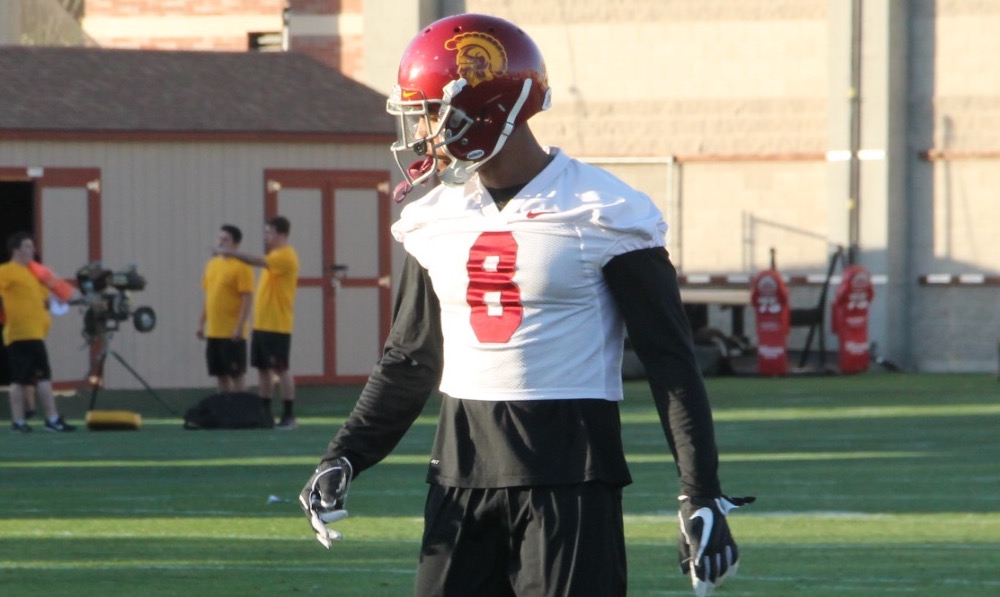 Clay Helton came away from the Saturday scrimmage saying it was the best day offensively this spring, and I would agree with that.

To be clear, it wasn’t an offensive explosion but it was enough to say the offense got the better of the defense today and it’s the first time we’ve been able to say that this spring.

“I really thought the run game set the tone,” Clay Helton said. “The offensive line, 28 (Aca’Cedric Ware) and 29 (Vavae Malepeai) were doing some hard running between the tackles, and the passing game fed off that. We had receivers making plays, one bad pass from Jack Sears but it was encouraging to see Jack bounce back after that.”

The bad pass from Sears came on his first series with the offense pinned back in their own end, Jack tried to hit a slant to the left but Jonathan Lockett read it from his nickel spot and stepped in for the easy interception and short jog into the end zone.

“It was a classic case of a fifth-year senior jumping the slant on a young quarterback,” Helton said.

The running game got going pretty quickly after that. Vavae made the first big play when broke a tackle attempt from Talanoa Hufanga and had a 12-yard run for a first down. Ware had a couple runs up the middle and then Sears hit Velus Jones behind the defense for a score.

On the next possession, Ware started things off with 8 yards off left tackle, and then Fink hit Vaughns for 7 yards and a first down. Next Malepeai getting outside for a first down run. That was followed by a Sears pass down the right sideline to Velus against coverage from Chase Williams, Velus made the catch, Chase fell down and Velus sprinted for the end zone but was caught by Hufanga at the four-yard line (nice effort from Talanoa). Ben Easington punched in the short touchdown run.

The next drive saw the best run of the day when Vavae went to the left, found the hole blocked, and made a solid cutback to get to the right sideline for a 40 yard run. Iman Marshall knocked away a pass attempt for Josh Imatorbhebhe in the end zone. Levi Jones came on a blitz and batted down a Holden Thomas pass attempt.

On the next drive there was a pass across the middle to Trevon Sidney who was met by a host of tacklers, with the defensive coaches screaming from the sidelines to strip the ball. Sidney obviously felt the defenders were going too long and he took a swing at Reuben Peters, the players were separated and Helton had Trevon go to the sidelines. It was a small scuffle but qhat I liked was the leadership from Jack Sears, who ran about 30 yards to get his offensive teammate Trevon away from the play as soon as possible. Velus took a sweep to the left on the next play for a touchdown after taking on multiple defenders at the goal line.

“Velus is being asked to do more and he’s responding,” Helton said. “It’s his third year in the system, the light has come on for him in terms of having clarity in his role and that’s allowing him to play faster. We’ve got a bunch of big, tall receivers but he’s the only guy in the group who is built like he is and is a true 4.4 guy. He made 3 explosive plays today and that was great to see.”

On the next series we saw a Hunter Echols sack, and then Fink hit Vaughns across the middle and Iman Marshall made an aggressive play to strip the ball away and he returned it for a score. Vaughns was down for a couple minutes after the play but got up and was fine.

“The turnovers were a black eye for the scrimmage but otherwise I thought things were pretty clean,” Helton said. “The offense got the defense a couple times with some hard counts to get them offsides and that will be something for the defense to watch on film and be aware of.

Among those in attendance were JT Daniels, Devon Williams, John Jackson III, Jason Rodriguez, Jonah Taunau’u and members of several 7-on-7 teams (Florida, Hawaii, Northern California) who are in town for the Adidas tournament