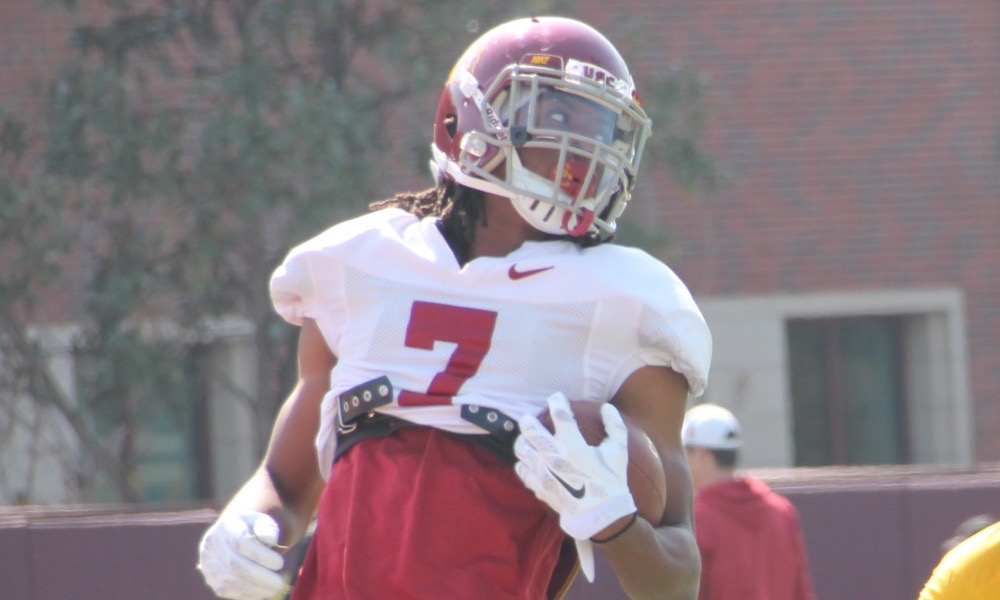 After a hot Tuesday practice to begin the final week of spring ball, Clay Helton was asked if there was a position group that stood out to him from spring and he quickly said the defensive backs.

“I’m thoroughly happy with our DB’s. They are really a supportive group, communicating as well as any position group on our team, and playing well as a whole. And when you play in this conference, which is a passing conference, those things are very important.”

Helton singled out the play and leadership of three players in seniors Iman Marshall, Ajene Harris and Marvell Tell. It’s a real luxury to have three starting seniors within a position group but they aren’t the only players with experience in the system.

Biggie is getting the most praise this spring for his play, his focus and raising his whole game and he deserves the attention. He had another pass break-up/potential interception on Tuesday, another example of him being in position to make a play, and he’s made his share this spring. One of the underrated storylines of spring for me has been the play of Greg Johnson, who has been limited from full contact due to his shoulder but anytime he is taking part in a drill or 7-on-7 he is looking good. Don’t be at all surprised when fall camp rolls around, assuming he is healthy, if Greg is entrenched as the lead reserve behind Biggie.

Ajene is a proven veteran in the slot (Helton calls him the vocal leader of the group) and he’s had a good spring. Behind him are two pretty good options in Ykili Ross and Jonathan Lockett. Ross has also taken reps at safety this spring so he could see time at either spot while Lockett has been one of the best stories of spring with the way he has come back after two hip surgeries.

With Jackie Jones out for spring, we’ve seen Isaiah Langley taking the starter reps at the other corner spot and he’s a guy with plenty of game reps under his belt, he’ll be fine. Early enrollee Chase Williams has gotten invaluable reps this spring, he’s raw but he’s also long and athletic, two good traits for a corner. In fall we will either see Jackie here or we won’t, and there are other options in the form of incoming freshmen Olijah Griffin and/or Isaac Taylor-Stuart, or Lockett could always move over if needed.

When you’re talking Marvell Tell, you’re talking about the one who brings the physicality. It remains to be seen who will line up at the safety spot next to him (Bubba Bolden was lining up there most of the time in spring) but there should be a fun competition to watch this summer and into fall camp to see how the rotation shakes out among some talented players. In addition to Bolden, who has shown he can make plays, there are guys such as Ross, C.J. Pollard (Helton said recently that he is taking Chris Hawkins-type role), Isaiah Pola-Mao (not cleared yet for contact but impressive looking in drills) and the early enrollee freshman Talanoa Hufanga, who has impressed as much as any of the early enrollees with his football instinct.

* Helton talked about the offensive performance on Saturday, where they ran the ball between the tackles and were able to hit some deep passes, as “the blueprint of what we want to be, especially early in the season. We need to have the ability to run the football, then play action, keep things simple for the quarterbacks.”

* Stephan Carr is ahead of schedule in his rehab from back surgery in February. The timeline is to have him doing some change of direction work and strength and conditioning around June 1, and then get back to football work in fall camp, right now he’s on pace to be full speed by fall camp. Helton said they will be “very careful” with bringing him back.