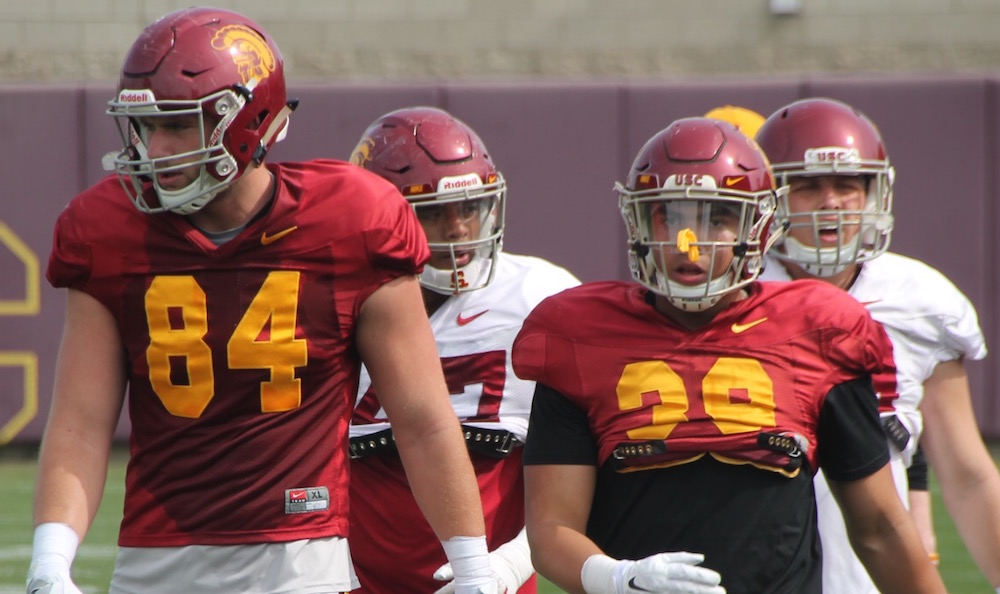 The Trojans finished their final spring ball practice on Brian Kennedy-Howard Jones Field as the last official session of spring will move to Cromwell Field on Saturday for television purposes.

The Thursday practice involved several ball stripping drills, a lot of work on special teams coverage drills, and lastly some overtime situational work. The big play of the day came from Ajene Harris with an interception in the end zone during an overtime period, and Matt Fink also had a scoring run during another OT period.

“We had our last situational drill with the overtime and Ajene made a big pick after Jack floated the ball a little bit,” Clay Helton said. “It was the correct read, he just needs to zip it in there. And we ended the final phase of our special teams competition with Chase McGrath hitting a 50-yard field goal for his group.”

“We had a lot more ball drills this spring,” Ajene Harris said. “I know I had some drops last year so hopefully the ball drills will help. Right now we’re pretty confident when the ball is in the air we’re all going for it.”

One of the early drills of the day was a ball stripping drill with one ballcarrier and two defenders trying to rip the ball away, and the defenders were allowed to be pretty aggressive. There was then a team run period on Brian Kennedy Field where the defense was also placing an emphasis on ripping the ball out. Tell had a big hit on Ware at the line for no gain. Fink rolled right and threw the ball away, over the fence, incomplete. Vavae got the ball stripped and the defense recovered. Velus Jones caught a ball over the middle and took a big pop from Talanoa Hufanga.

During a 7-on-7 session we saw Sears hit Josh Falo for a touchdown, and Cameron Smith put a hit on Trevon Sidney coming across the middle to force an incompletion.

In the overtime session drills the ball was placed on the 25-yard line. Sears tried to go to the end zone but it was Ajene who tipped the ball first and then stayed alert as the ball came right down in his hands for the pick. Fink had a designed run to the left side for an 8-yard TD run. On the next series Fink had pressure from Porter Gustin but Erik Krommenhoek had faked the block on Porter before sliding out into the flat wide open, but Fink missed him. The final play of the day was a fumbled center snap exchange with Fink and Gustin recovered.

I’m really proud of these seniors. All 19 are on schedule to graduate before our bowl game, so we could have them all wearing the “graduate” patch in the game. And 9 of them will have their degree before they play the season opener.

“I’m able to anticipate things, to know where things are supposed to be lined up, that kind of recognition is just a lot faster these days” – Cameron Smith, on how things went in his final spring ball