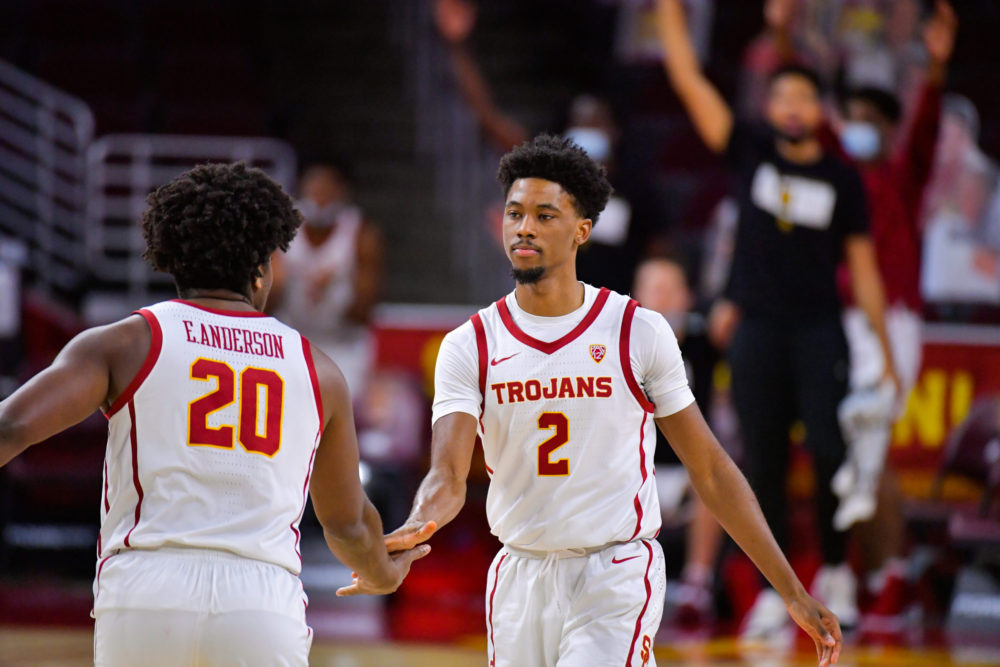 I doubt that I am the only one in the last few days who has reflected on how well this team has played. Last year was a good season. The Trojans were 22-9 and tied for third in the conference at 11-7. Very little of last year’s production was back for this season, yet the Trojans are 19-4 and lead the Pac-12 at 13-3 with four games remaining. Every game has been important this month on the run to a potential regular season title and that will continue thru the next two weeks.

It has been frustrating to watch this team play in empty arenas, though I suspect that their great success will result in a lot of new Trojan basketball fans. The team numbers are fantastic. Through Tuesday’s games the Trojans are number 14 in the NET rankings, 19th in the AP poll, and Joe Lundari of ESPN lists the Trojans as  a 4 seed and playing Western Kentucky in the first round of the Big Dance.

The coaches are constantly preaching to the players to focus on one game at a time, yet Andy Enfield and his staff is peeking a little ahead like the rest of us. Enfield has said that the mountain trip is tough because of the altitude. It might have been easier to play Utah first and get acclimated that’s not what the schedule says.

The Buffs are 17-7 and in fourth place in the conference with an 11-6 record. Their NET ranking is second best in the league at 22 and they are listed as a seventh seed in Lunardi’s latest bracket. The Utes are 9-10 overall and 6-9 in Pac-12 games. They have a chance to get to the post season if they can pile up some wins, but they’re not going to Indianapolis for the NCAA Tournament.

Colorado leads the conference in free throw percentage at a very good 82.7%, Utah is second at 77.6% and not surprisingly the Trojans are last. I’ll save the embarrassment and not list USC’s percentage. USC leads the league averaging 40.2 rebounds per game, CU is fifth with 35 and Utah eleventh with 31.

The Trojans are fourteenth nationally in allowing the fewest opponent offensive rebounds per game, a stat which surprised me. There has even been a little improvement at the foul line. Chevez Goodwin is up to 50% for the season and Isaiah Mobley has raised his percentage a bit to 47.6%. One surprising free throw number is Noah Baumann’s 45.5% from the line.

CU Beat USC In The Conference Opener For The Trojans

The Trojans had to reschedule some games in December due to Covid issues. They opened Pac-12 play at Galen with a 72-62 loss to CU on December 31st. The Buffs led most of that game though the Trojans closed to within 2 with approximately 10:00 left before the Buffs pulled away. Tahj led the Trojans with 16 points and 5 assists, making 5-11 shots. Evan was held to 12 points on 5-14 from the floor. In the second half USC made only 9-29 shots (31%) and for the game converted 23-60 (38%). It was USC’s fifth straight loss to CU.

Colorado only plays two games after Thursday, hosting UCLA over the weekend and playing ASU on March 4. They have been up and down this year. Some of their conference losses to the bottom teams in the league are hard to understand. They lost 84-80 at Washington on January 20,  77-74 to Utah on January 30 at home, and 71-62 to Cal on the road on February 13. The Buffs are 4-2 in February.

What’s Different From The First Game

There are two important differences. The Trojans were coming off a two and a half week Covid interruption of all team activities. They hurriedly scheduled a game against Santa Clara two days before playing Colorado to try to get into some some type rhythm. Also, point guard Ethan Anderson was in the middle of his recovery from a back injury and his absence was particularly felt early in the season before the Trojan players had played many games together.

In their second conference game the Trojans faced a very early “must win”. They couldn’t afford to start the conference season 0-2. USC jumped out quickly and led 20-4 in the first seven minutes. The Utes answered with a run of their own and the Trojan lead as only 32-28 at the break. USC played a very good second half and easily won 64-46.

The stats from this game were odd. Evan did not have an official shot. The Mobley brothers together totaled only 5 points as the Utes focused almost exclusively on the two Trojan big men. Tahj made 7-16 shots for 18 points and added 5 assists. Isaiah White, Drew and Chevez all made 5-7 shots. Isaiah finished with 12 points and 5 rebounds, Drew with 13 points and 8 boards and Chevez with 11 points and 5 boards. The Trojans  made 53% of their shots.

Two other players the Utes count on did not do much in this game. 6’0” sophomore point guard Rylan Jones took only three shots and made one; he finished with 5 points and 3 assists. 6’1” senior Alfonso Plummer made 3-11 shots for 7 points.

The Utes have not played up to expectations. When Allen decided to return and not enter the draft the hope was for the Utes to finish in the middle of the conference standings.  Allen is a driver/ slasher, and is averaging 17.3 points, 6.3 rebounds and 3.5 assists. His slash line is 46%/ 29%/ 73%. Jones had an unexpectedly good freshman season. He is listed at 6 feet but doesn’t look that tall.  He has disappointed this year, averaging only 7.8 points and 2.8 assists and has not shot the ball well. He has made 36%/ 30%/ 70% of his shots.

The Trojans played very well in the Oregon game and appeared to take seriously the lessons learned in the loss to Arizona. The game plan for USC will be similar in both games. Against Colorado they need to try to stop Wright from driving into the lane and force him to shoot from outside, which is easier said than done. Against Utah the Trojans will try to stop Allen and Jones from getting into the lane and force them both along with Martinez to shoot from the outside.

Colorado is excellent from the free throw line and Utah is good. The Trojans need to defend without fouling, which they did well in the Oregon win. Evan Mobley needs to be aggressive on offense in both games; when he assets himself good things happen. He has been much more assertive in the second half of the season, drawing a lot of fouls and has been making a good percentage. It may be a game time decision whether Isaiah Mobley plays in either game. If Isaiah can’t go, the Trojans need to share the rebounding load as the did in the Oregon game.

USC had great play from Drew and Ethan on Monday and Isaiah White and Max made big contributions. If Isaiah Mobley can’t play and the Trojans decide to play with two bigs Chevez will need to play well; Boubacar  Coulibaly has not played any key minutes and Josh Morgan remains out, which leaves the Trojans thin in the front court without the elder Mobley. The big wings will have to play well.

I think USC will get two more wins this week. The players have been very focused most of the season, and if Drew can continue playing at his early season level which he did against Oregon and the rest of the rotation contributes the Trojans should be in good shape. CU has been up and down and other than Wright, who is very good, I don’t think they have anyone else that should present a major problem. As for Utah, Allen is good but the rest of the roster isn’t. Thursday night will probably close, but Saturday should be one sided.