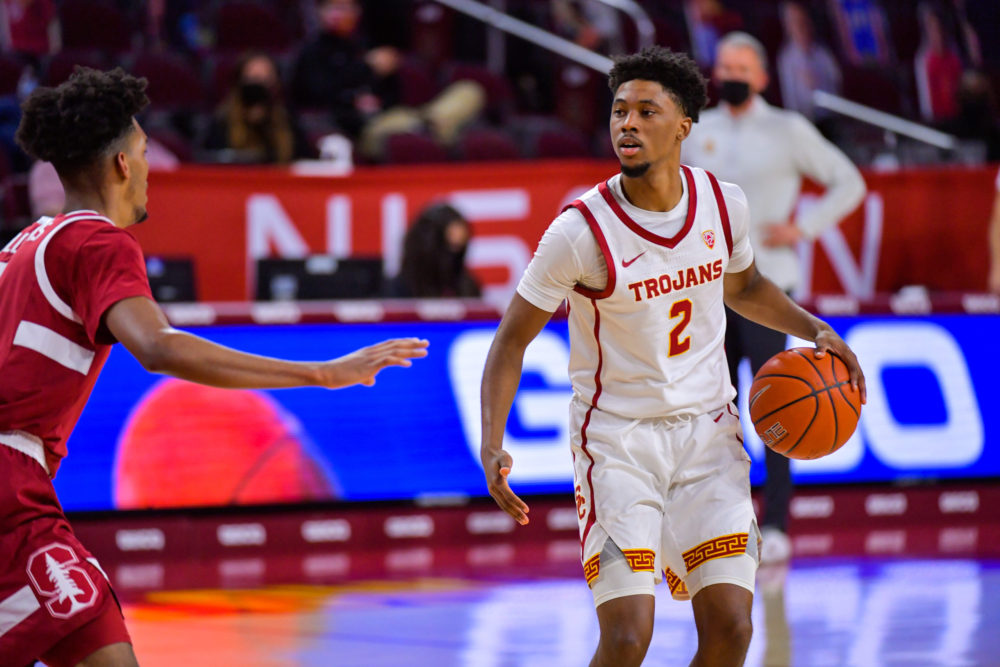 No one knew what to expect when the Trojans took the court Thursday night. After consecutive losses for the first time this season people outside the program were questioning this team. At least for one night all questions were answered. The Trojans jumped out to a 17-2 lead and never looked back. They led 36-17 at the half and by as many as 41 with a minute left before the final buzzer and a 79-42 win.

The Trojans are 20-6 and 14-5 in conference play with one big game left on Saturday in Westwood. If the Trojans win they will finish either first or second in the Pac, depending on Oregon’s rivalry game against OSU. Lose and USC can be second, third or tied for third. A Trojan loss and a Colorado win in its last game (assuming Oregon beats OSU) would result in a tie for third and the four seed in the Pac 12 Tournament. Last year they tied for third and were seeded fourth and were 11-7 in conference games.

Coach Enfield said: “ I thought it was very important to get off to a good start on defense….The players were very focused in the last few days.”

He added that the travel and playing four games in the last ten days including two at altitude took its toll.

“In the second half of the Utah game we looked like we were moving at half speed,” Enfield said. “Not just one player but the entire team. We had so much more energy tonight.”

The game started very slowly for both offenses. USC led 4-2 at the 14:16 mark. The Trojans had seven turnovers in the first six and a half minutes, and then the dam broke wide open. Stanford made only two shots in the first 13 minutes plus and the game was over by halftime when the Trojans led 36-17. The Trojans dominated in almost every statistical category in the half, making 16-30 shots and holding the Cardinal to 6-27. Only forward Spencer Jones had more than one basket for Stanford.

The second half was more of the same. The Trojans made only 2-13 from three in the first half but found their range early in the second. Drew Peterson and Tahj Eaddy both made a pair of threes and the lead kept growing. At the 11:39 mark Jones was still the only Cardinal with multiple baskets.

Star forward Oscar da Silva was out with a leg injury and the Cardinal were also missing Daejon Davis and Bryce Willis. While their absence likely impacted the score it didn’t impact the outcome. The Trojans were not going to lose this game; they cleared the bench over the last five minutes and everyone contributed.

The Cardinal made only 15-59 shots and 6-25 from three. They were out rebounded by 18 and the Trojans blocked 5 shots. The leading players for Stanford who played were taken out of their game by the USC defense. Second leading scorer Jaiden Delaire made 3-14 shots, Ziaire Williams 1-8 with four turnovers, and Jones could not keep up his production and finished 3-10 and 1-6 from three, though he led the Cardinal with 9 points.

Almost every Cardinal shot was contested. Enfield inserted Reese Waters into the game with seven minutes to go in the first half and he played several minutes in the second half as well. Enfield said that Reese had been very good on defense in practice this week and he wanted to reward the effort. Reese looks a lot like D’Anthony Melton in size and body type and any experience he gets this year is a plus for the future.

The Trojans made 31-59 shots (52%) and 9-24 (37%) from three, after a slow start from long range. They had assists on 21 of their baskets and there was very little one on one play on the offensive end which plagued them last week. This night was good team basketball.

The Drew Peterson from the first half of the season is coming around. He had 15 points, a team leading 9 rebounds and 8 assists. He made threes, a dunk thru the lane and the Cardinal defense, and creative shots on the way to the basket. Drew is a very good weak side rebounder on the defensive end. Enfield is clearly happy that Drew’s slump appears to be over.

Tahj started slowly but finished with 16 points. The only other Trojan in double figures was Evan Mobley. Chevez Goodwin was 4-4 in the first half and finished with 8 points, 5 rebounds and 2 assists.

It was a very balanced team effort. Drew played a team high 27 minutes, Evan 26 and no one else over 23. They should be a well rested group on Saturday.

Reese played 10 minutes and missed his two shots. He looked a little lost on offense on several possessions. Josh Morgan is back from injury and made a basket and grabbed 2 rebounds in six minutes and Boubacar Coulibaly made two shots in his six minutes.

Max Agbonkpolo played well and started the second half in place of Isaiah White, who didn’t play after the break. Max made two threes and 8 points and chipped in two boards and an assist. Max said that “(m)y role off the bench is to guard the best player and hit open threes. I was in an slump early in the year but feel good now.”

Enfield Described How The Trojans Handled The Two Losses

The team took the day off on Sunday and had “two days of hard practice. It was nice to take a day off; the team was exhausted.” He continued: “The players were mentally and physically tired and the altitude really affected us. They were very focused in practice and really responded and were ready to go.”

There were a few other interesting post game comments. When asked about the impact of the Covid virus Enfield immediately mentioned the unbalanced schedule. He said the conference tried to get in as many games as possible and noted that Oregon did not have to play at Pauley as scheduled. “Switching schedules has been a challenge. We are one of only a handful of teams( in the country) that had to play three games in one week four times.” He pointed to the late schedule change last week from Stanford to Oregon and said it was a challenge to get ready to play a team for the first time on short notice.

The unbalanced schedule is a real problem and may be the reason the Trojans do not win the conference title. Playing a game or two less when you are winning is an advantage. I’m not as convinced about having to get ready to play on short notice. The winner of next week’s tournament will play at least three days in a row. If a team wins its game on the first day of a weekend in the NCAA Tournament it will play its next game against a team it likely has not seen with only one full day in between. It is somewhat different than what Enfield was talking about because every team will be in the same situation.

To win in March is a grind. In a year when it looked liked UConn might not even make the Tournament the Kemba Walker led Huskies ran through five games in five days to win the Big East and then six more wins to be crowned in Houston.

Chevez talked about the road losses. “No one panicked after the mountain trip. We went back to fundamentals and I feel we’re back on the right track now.”

Max talked about how he missed playing in front of the fans. He added that over the summer “I knew that we were going to be good coming in”. We surprised a lot of people.

Final note: Enfield talked about this season: “It’s a credit to how the team came together and played together to win 20 games (in a 27 game season rather than the usual 31 games) with an almost new team. I’m very appreciative of what this group has done for the program.”