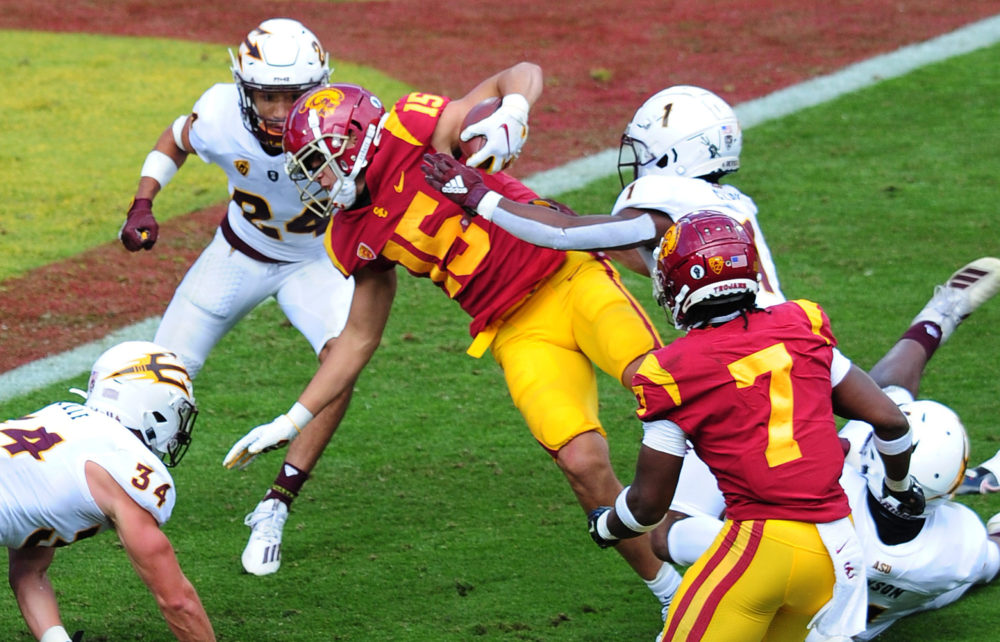 On the final day of 2020, we’re looking back at USC’s 2020 football season and selecting the top 10 plays of the campaign. While the season was shortened to just five regular season and six total games, the Trojans packed more than a few thrilling moments into that package.

Bryant brings it back against the Bruins

True freshman wide receiver Gary Bryant Jr. got more involved in the offense as the season wore on, but his biggest contribution this season came on special teams against UCLA. The Trojans didn’t manage much in the way of kickoff returns this season, but they got a massive one when it mattered most. With UCLA having taken a two-point lead with just 52 seconds left, Bryant settled under the ensuring kickoff at the one yard line. Behind a few key blocks from Kenan Christon, Spencer Gilbert and others, Bryant returned the kick 56 yards all the way out to the UCLA 43 yard line. USC scored the game-winning touchdown a few plays later, but that likely doesn’t happen without this return.

It was a bit of a disjointed first half for USC against UCLA, but the Trojans had a few plays in it that kept things from truly getting out of and when the Bruins showed up playing inspired football from the opening kick and the Trojans took a while to get going. USC had just cut a 14-0 lead in half and the defense took the field looking to get the ball back late in the second quarter.

On the second play of UCLA’s drive, USC safety Isaiah Pola-Mao put together one of the most impressive defensive plays of the year. As UCLA quarterback Dorian Thompson-Robinson faked a handoff to the running back, Pola-Mao set the edge of the defense, forcing Thompson-Robinson to both not hand the ball off to the back, and also not take off running after the fake.

With the ball still in the quarterback’s hand, Pola-Mao read the swing pass to the receiver who had been in motion and looked as though he would go jump that route when Thompson-Robinson looked that way. But he was then able to react quickly enough when the throw was directed behind him at the slot receiver who had faked a block for the swing pass and then released on a slant. Pola-Mao got his hands up into the passing lane to deflect the ball into the air and finished the play with a diving interception.

Talanoa Hufanga rightly deserved a bulk of the praise directed toward the USC defensive this season, but Pola-Mao had a strong season next to him in the defensive backfield and this was his play of the year. USC only capitalized with a field goal, but in a tight game that UCLA appeared to control early, this was a big play. And outside of the game situation, this was just a terrific play combining understanding, instincts and athleticism.

Vaughns lays out for the score

UCLA had every bit of momentum in this game after a touchdown to end the first half and to start the second put the Bruins up 28-10. With a first and 10 at the UCLA 38-yard line, Slovis let one go deep down the field for Tyler Vaughns, who made a tremendous diving catch in the endzone. It was the third-straight completion to Vaughns on the drive, as he gave USC some life that kickstarted the second-half comeback.

Tuipulotu sets the tone against Utah

Tied at three entering the second quarter, it was still difficult to get any kind of read on this USC team after late-game comeback wins against Arizona State and Arizona. It was then that Marlon Tuipulotu broke through the Utah offensive line and leveled quarterback Cameron Rising. Tuipulotu forced a fumble and then was quick enough to try to jump on it, knocking it away from Rising and allowing fellow defensive lineman Connor Murphy to jump on it. Running back Vavae Malepeai scored a touchdown two plays later to give USC a 10-3 lead. Utah would tie the game at 10, but with Rising knocked out of the game, the Utes could do little on defense after that play. It also helped set the tone for a USC defense that shut out Utah in the second half.

Facing fourth and 13 with just three minutes left and down by 13, things looked just about finished for the Trojans. But when Arizona State jumped offsides, it gave Kedon Slovis a free play to take a shot into the endzone. It goes down as a lucky bounce, but wide receiver Bru McCoy was in the right place at the right time as he was able to haul the ball in for a score after Amon-Ra St. Brown tipped it into the air.

On the very next play, McCoy was in the right place again as his pressure on an Arizona State player forced him to deflect the onside kick attempt rather than haul it in. McCoy then leapt into the pile and was credited with the onside kick recovery. Without either of these plays, it’s highly unlikely that USC is even in a position to put the finishing touches on an unbelievable comeback win.

London rumbles for a long touchdown

USC had nothing going for it more than halfway through the second quarter against UCLA. The Trojans had punted twice, missed a field goal and thrown an interception in digging a 14-0 hole against the Bruins. Enter Drake London.

After buying a little time, Kedon Slovis unleashed a ball down the middle that found London at the UCLA 34-yard line. London spun away from the first defender but was wrapped up by two Bruins at the 25-yard line. Well, seemingly wrapped up.

London broke free, had the ball popped in the air by the second defender but was able to bring it back in, then was able to outmuscle or outmaneuver five UCLA defenders into the endzone. Five Bruins got two hands on him during the run and none were able to bring him down until he crossed into the endzone. London has been responsible for a few big plays in just two years at USC, and this one ranks right up there with any of them.

Sure, it’s not one play, but Amon-Ra St. Brown’s four touchdown grabs in the first quarter against Washington State land him at No. 4 on this list. It was an impressive feat, made more impressive by the fact that two of the grabs were highlight-reel worthy as singular plays.

While the game ended in a blowout, the two most difficult touchdown grabs from St. Brown came on third down plays. If those fall incomplete and USC is forced to kick field goals, maybe the Trojans don’t have the same complete control over the Cougars as they did when the catches are made.

More than just the catches, St. Brown has been such a steady presence and force for the USC offense that it was great to see him put his name in the record books with this kind of mark.

Vaughns goes up and gets it

It wasn’t the best pure catch Tyler Vaughns had made during his USC career. It probably wasn’t even the best grab he made in this game. But in terms of a big-time play meeting a big-time moment, Vaughns late-game catch against UCLA lands it at No. 3.

On the play immediately following Bryant’s long kickoff return, Slovis dropped back to pass with just 43 seconds remaining and the Trojans down by two. It took him very little time to decide to give Vaughns an opportunity to make a play deep down the sideline and the redshirt senior receiver delivered. Vaughns went up between two defenders to haul in a 35-yard reception that effectively won the game for USC. Vaughns’ grab took the ball down to the eight yard line and with the Trojans only needing a field goal to win, USC was virtually guaranteed to finish off another late-game comeback.

It didn’t look like Talanoa Hufanga was supposed to be in coverage at all as Washington State’s Jayden de Laura dropped back to pass late in the first quarter against USC. Hufanga came on a blitz with five other Trojans but got stood up at the line of scrimmage. In maybe the finest display of football instincts over his extremely-impressive USC career, Hufanga read de Laura and dropped back, into the path of a crossing route coming behind him.

Well, it was into the path of the route for Hufanga, though it might not have been for other players. He was able to react quickly enough to the throw that he got his hand up enough to bat the ball into the air. And that’s just where this play starts.

Hufanga found the ball in the air and was able to bring it in for an interception — is third in three games. Then on the return, Hufanga leapt a would-be tackler in a display of his athleticism and took the ball all the way down to the four yard line. USC punched it in one play later and took a 21-0 lead, effectively ending the game in the first 15 minutes.

Slovis to London finishes the comeback against ASU

It doesn’t quite measure up to the fourth-and-nine against Notre Dame, but that was the situation USC found itself in when Kedon Slovis and Drake London delivered the top play of the season for the Trojans. USC had received some lucky bounces in the last few minutes, but this one was all skill, as Slovis delivered a strike and London hauled it in between two defenders as one attempted to rip it out of his hands. With just 1:23 left on the clock and down by six, the Trojans likely don’t get the ball back if that’s an incomplete pass and USC’s season changes completely after just one game.