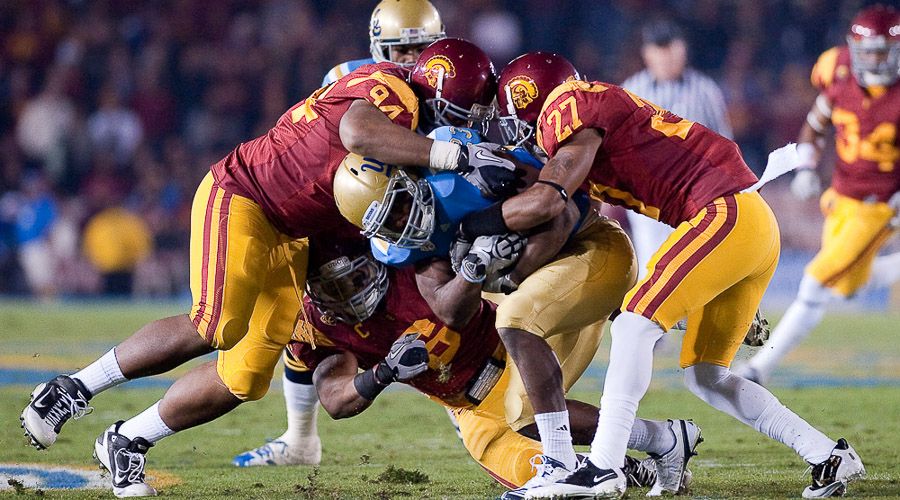 Here’s a look at seven prospects from the Class of 2015 who could be impacted by this Saturday’s cross-town matchup.

DL Rasheem Green (Gardena, Calif./Serra)
Defensive linemen with Green’s size and talent just don’t come out of Southern California too often, so it’s no wonder that both USC and UCLA made him a major priority right from the get-go, and he’s taking a long look at both schools. Stanford is another school to watch, as is Miami and Oregon. Most project him to USC when it’s all said and done.

DB DeChaun Holiday (San Marcos, Calif./Mission Hills)
A versatile athlete capable of playing cornerback or safety, Holiday’s name is more frequently mentioned with UCLA than it is with USC, but the Trojans still appear to be in the conversation here at least somewhat. In fact, USC coaches were just recently spotted at one of his games. Washington, Oregon and Oklahoma are a few other schools that he’s considering.

WR Christian Kirk (Scottsdale, Ariz./Saguaro)
Most common thought as of late has Kirk winding up at Arizona State or Texas A&M, but he already took an official visit to UCLA, and he’ll also visit USC on Dec. 5, so neither the Bruins or Trojans can be counted out. The USC coaching staff is known to covet the big play wide out in a major way. Auburn is also still being considered as well.

DE Keisean Lucier-South (Orange, Calif./Orange Lutheran)
Lucier-South is probably the biggest long shot on this list for the Trojans, while UCLA is likely one of the favorites. Still, the Trojans coaching staff has shown tremendous determination in their pursuit of the speedy defensive end, and their efforts have paid off with increased interest. So, with a big win, perhaps they make a move up his list. He’s also considering Oregon, Oklahoma, Michigan and Florida.

CB Iman Marshall (Long Beach, Calif./Poly)
The elite cornerback prospect certainly has plenty of options, and he’s already lined up official visits with Notre Dame, Florida State, LSU, Michigan and Oklahoma. Still, many believe that he’ll stay in-state, and the Trojans figure to have a very solid shot, but he’s also shown legitimate interest in UCLA and Stanford as well. He’s frequently been spotted in both USC and UCLA gear, and you can be sure that he’ll be keeping a close eye on this one.

LB Osa Masina (Salt Lake City, Utah/Brighton)
Masina, one of the top linebackers still on the market, might not hail from Southern California, but there are definite indications that his final decision could come down to USC and UCLA. He’s already taken an official visit to UCLA (Oct. 3), and he’ll trip to USC on the weekend of Nov. 28. ASU, where he officially visited a few weeks back, is also in the hunt.

WR Equanimeous St. Brown (Anaheim, Calif./Servite)
Tall and athletic, St. Brown recently visited Utah and Notre Dame, but closer to home he’s also looking at both USC and UCLA, and he’ll be among those in attendance at the cross-town clash this weekend.