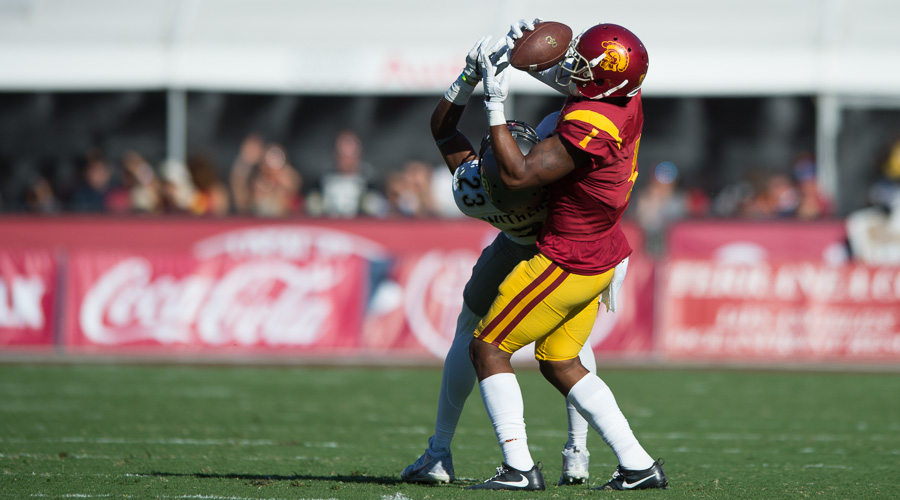 In this article we take a look at the 10 most impactful or memorable moments from the 2016 season, presented in chronological order:

At this time last year there weren’t many Trojan fans who could have told you who Stevie Tu’ikolovatu was, even though USC had played against him with the Utah Utes. Even when he announced over the summer that he would be a grad transfer to the Trojans it was viewed as a nice boost to the depth of a thin defensive line, and not much more. What we got, however, was an absolute gift, a big-time run stuffer who was able to plug the interior of the line and offer a veteran presence to a young group that got better as the year went along. Helton praised Stevie’s leadership in the locker room many times throughout the year, particularly with someone like Rasheem Green. The move turned out well for Stevie too, he earned 2nd team All-Pac-12 honors, improved his stock for an NFL future and gets to play in a Rose Bowl.

We all know what happened against Alabama so there’s no need to relive it here. But it did happen, and it was the kind of loss that won’t be forgotten because a defeat like that simply hasn’t happened often in the history of USC football. You heard it in the voices of former players after the game, they were stunned by what they saw and you felt for those who had set the standard of the program. To say there were questions about Clay Helton, questions about the players, questions about basically everything involving the future of USC football, it would all be true. And that’s one of the things that makes the season-ending run to the Roses so amazing, to think of how far the team and the coaches have come since that moment is truly impressive.

I don’t think there’s another move that impacted the 2016 Trojans more than this one. From the moment that Sam was made the starter you could see a different energy that began to infuse the entire team and the excitement steamrolled on the way to an 8-game win streak to close the year. Sam brought so much with an attacking style, a gunslinger mentality, he spread the ball around to all his receivers (including the tight end!) and he made plays with his legs when he needed to. There is a cliché that teams take on the personality of their quarterback and Sam plays with a toughness that definitely resonated with, and was appreciated by, his teammates. Shortly after he was named the starter one Trojan fan said, “Sam Darnold brings hope” and so far he has delivered on that.

If you are offered a chance to have a critical game come down to a final play, where your best defensive player, the Pac-12 Defensive Player of the Year, is matched up one-on-one against an opponent, would you take that deal? I would. And that’s exactly what happened with the Trojans on the road against Utah, when Adoree’ Jackson was in coverage at the goal line against Tim Patrick and his right shoe came off, causing him to slip and allowing the game-winning touchdown. It was one of those “are-you-kidding-me” moments and it pushed the Trojan season to the brink. It was also a stunning loss because it was a game that USC had control of at one point, and looking back with how the season ended it sticks in the craw to think of how close the Trojans came to coming out of Salt Lake City with a win, and an 8-game win streak suddenly turns into 9 games and a 10-2 record.

When the Trojans were struggling at the beginning of the year there was a lot of talk that the team needed a motivational kick in the pants, the kind provided in the past by coaches such as Marv Goux or Ed Orgeron. Instead, with his team sitting at 1-3 and his coaching seat getting pretty warm, Clay Helton went in the opposite direction and had his team establish more of a business-like approach with an increased focus on attention to details. Chatter at practice was kept to a minimum so as to hear the instruction from the coaches, and it seemed unnatural to have things so quiet. But the change worked. A team that was having communication issues on the field suddenly began to clear those up, and as the wins piled up the team embraced the approach more and more. In hindsight, it was a critical move by Helton that really paid off.

This is probably the most under-the-radar entry on this list but it’s important to remember the context of when it happened. The Trojans were sitting at 1-3 and were a team desperately looking for someone to make a play, any play, that would help turn things around. The game against the Sun Devils did not start promising with ASU jumping out to a quick 3-0 lead and then the Trojans turning the ball over on downs after an odd decision by Clay Helton to go for it on a 4th down inside his own 40. The ball was back in the hands of Manny Wilkins and a high-powered Sun Devil offense that had come into the game averaging 48 points per game, and the potential was there for the Trojans to be in a big early hole. It was Jonathan Lockett who stepped up with an interception at the USC 5-yard line that prevented a score, and the Trojans marched down the field for a touchdown of their own and went on to win the game (and haven’t lost since). You never know when a single play can get things headed in a new direction and Lockett’s pick came at a time when his team really needed something good to happen.

There have been some special plays made at the Coliseum over the years but for sheer athleticism it’s hard to top the interception made by Adoree’ along the USC sideline against Colorado. It was a play where Buffs quarterback Steven Montez was in a backpedal while getting pressure and tried to throw the ball out of bounds. The ball hung in the air long enough for Adoree’ to leap high to make the catch while the vast majority of his body is out of bounds, yet he had the presence of mind (and the flexibility) to reach down with his right foot extended to tap in bounds. It’s a play that, no matter how many times you watch it, never gets old in terms of wow factor.

* Rogers catch against the Buffs

Colorado was definitely a feel-good story for college football this year but when they came to town in October it wasn’t really clear if they were for real or not. As it turns out, they were for real, and the Trojans found that out in a game that was well in hand early on until the Buffaloes were able to pull even in the 4th quarter. From his own 30, Darnold threw a pass in the direction of a well-covered Darreus Rogers and gave his receiver a chance to make a play. The defensive back was so well positioned that it would not have been a huge surprise to see a pick, instead it was Rogers who reached over the top of the defender with his large hands and grabbed the ball before racing 46-yards for a game-changing play that led to the winning score. The scene was described as Rogers “taking the lunch money” from the defender, and there might not have been a bigger play for the Trojans all year.

As the Trojan victories began to mount in the middle of the year there was a loud refrain of questions about the strength of the opponents USC had faced, and all signs pointed to a match-up with the undefeated Washington Huskies as the true test of where things were at with the latest USC resurgence. What we saw that day was an incredibly well prepared and focused Trojan team that took the fight to the Huskies and came away with a lopsided win that got the attention of the national college football world.

* Adoree’ dazzles in the rain

By the time the regular season was ready to come to a close the Trojans had established themselves as one of the hottest teams in the country, and all that was left to finish off the year was the annual rivalry game against the struggling Irish on what was supposed to be a dreary, rainy day. Instead, it turned into a display of Trojan exuberance as Adoree’ lit up the crowd with three dazzling touchdowns, and the USC fans showed their support by dancing and cheering as the rain came down and the celebration continued throughout the game. It was one of those special moments of connection between fans and the team, and a memorable way to end the year.

Even though this moment didn’t take place during the regular season, or even on the field, it still deserves mention because of how good it felt. When the TV announcement showed that the Trojans would be returning to the Rose Bowl, well, let’s just say that all felt right with the college football world again and the stars had aligned to their proper place.