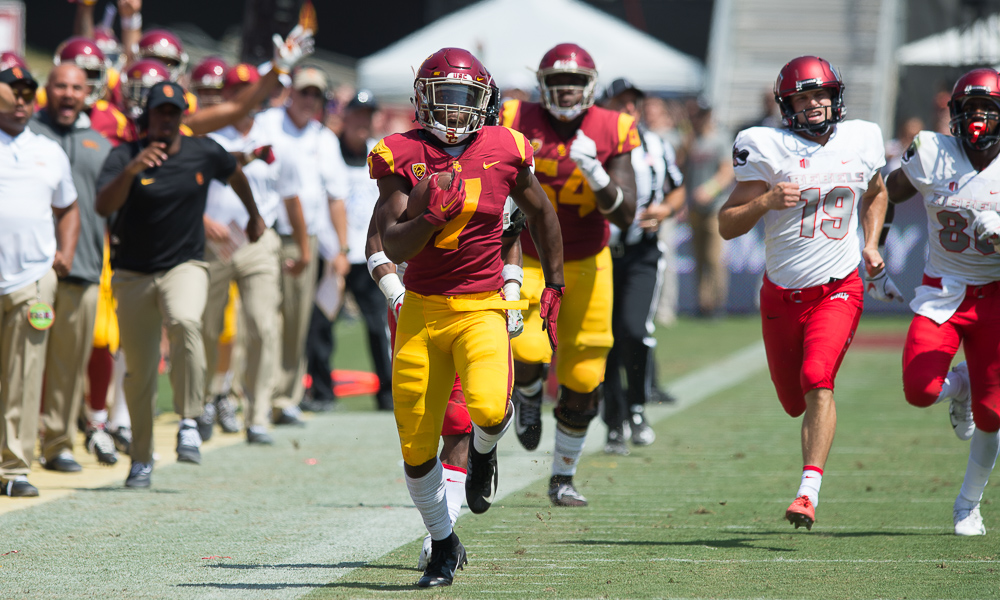 USC head coach Clay Helton met with the media following the announcement of 26 players signed in the 2019 recruiting class. Helton touched on topics ranging from the incoming class, to offensive coordinator Graham Harrell, to injury and development updates.

* Helton said they wanted “special athletes” because they knew they were going to a different offensive system with the offensive coordinator change. Kyle Ford is one of those special athletes. Helton compared him to Juju Smith-Schuster. And speaking of Ford, who is coming off an ACL injury, Helton said that the end of August will be nine months since the injury. He said at that point, it’s usually more mental than physical in getting back to full speed. He compared the injury to Solomon Tuliaupupu’s. Solo came in with an injury and redshirted last year.

* Helton said there is still space in this class to go after more players, whether that’s through unsigned players or the transfer portal.

* Helton said his goal with hiring an offensive coordinator was to find someone who is truly elite in the passing game, and he feels he found someone in Graham Harrell with playing and coaching knowledge of this system. Helton added that he felt is was far more important to wait and get the right person than to rush out and hire someone quickly. Helton made sure to point out that Harrell is not bringing a “true Air Raid” with him (one that’s exactly like Mike Leach’s at Washington State). He said he liked Harrell’s offense because he runs a lot of 11 and 12 personnel (formations with one or two tights ends) and that there’s always the threat of a running game (North Texas ran for nearly 2,000 yards last year).

* Helton also said he wanted someone elite in the passing game because he can rely so heavily on offensive line coach Tim Drevno for the running game. Finding and offensive system that meshed with Drevno’s ability as a line coach was important, and Helton said that the protections and assignments of this offense match up well with what Drevno wants to do up front.

* Helton said he will be more hands off in terms of Xs and Os this spring, instead choosing to let the coordinators really take center stage with that.

* Helton said he will focus more on “situational mastery”–things that go into limiting turnovers and penalties that he said really hurt the team last year. He wants to get better in fundamentals and technique, adding that a lot of penalties last year came out of a lack of technique.

* Helton said they will go full speed as often as they can in a team setting, but added later that they might need to get creative in the defensive backfield due to a potential lack of bodies after some departures and offseason surgeries.

* Helton said that anytime you bring in a new system, you are going to evaluate every position and the players know that every job is open. He added that the quarterbacks will receive equal reps during spring ball.

* Helton said that there is more of a sense of accountability to the team among individual players during these winter workouts. In general, this roster is doing more as a team.

* Helton was pleased to see that the 2017 offensive line group (Austin Jackson, Andrew Vorhees, Alijah Vera-Tucker, Jalen McKenzie, etc.) is starting to step up into a leadership group. He added that it’s always a good thing when your big guys become your leaders.

* Stephen Carr is back with the team and fully healthy. Helton said there are no signs of injury.

* Daniel Imatorbhebhe is still not fully with the team during conditioning. He is still receiving medical treatment.

* Helton said he’s never seen anything like incoming freshman Max Williams, in terms of his recovery from an ACL injury. Helton said the team doctors and physical therapists have been wowed by his recovering process and that he is ahead of schedule.

* Helton couldn’t get into positional focuses for the 2020 class, but said it would be a much smaller class compared to this 2019 group.