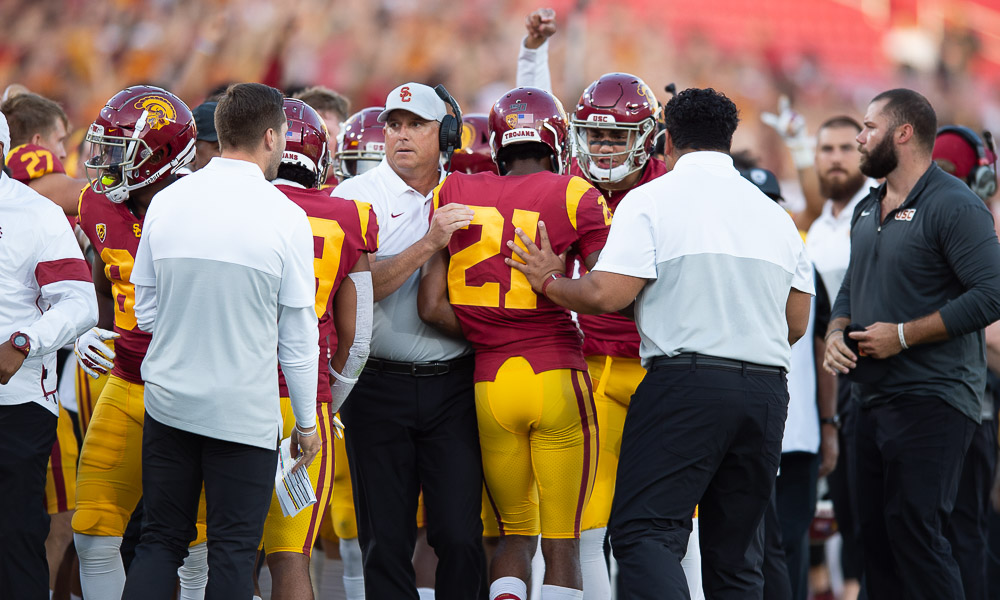 Following one of the biggest wins of his USC tenure, head coach Clay Helton spoke to the media Sunday evening, covering the Utah game, the health status of quarterback Kedon Slovis, and looking ahead to next weekend’s trip to Washington to take on the Huskies.

Following the game on Friday night, Helton was clearly happy for his players, and he reiterated that on Sunday. Asked how much satisfaction he took from the win with all the noise swirling around and about the program, he deflected it onto his team.

“I’m just happy for our kids,” Helton said. “They put a lot of work into it on a short week, on a hard week, and came out victorious. I couldn’t be any more pleased for them.”

While much of the speculation among fans and media heading into the season was about what the Trojans’ record would be over the first six games and whether Helton would still be the head coach, the win against Utah all of a sudden puts the Trojans at 2-0 and on top of the race for the Pac-12 South.

“I was extremely happy for our kids because of how important that game is,” Helton said, referencing the fact that three of the last four Pac-12 championship games have featured USC or Utah. “It’s a critical game. I’ve always aid if you can win all your Pac-12 South games, you’re going to be in Santa Clara.”

While that win puts the Trojans at 2-0 in the conference, it also puts them in a precarious situation when it comes to the quarterback position, as Kedon Slovis was knocked out of the game on the second play. Helton said Slovis is in concussion protocol with no timeframe for a return.

Matt Fink, who was stellar in leading USC to the win against Utah, will take first-team snaps for as long as Slovis is out, and Helton said there is no date this week as to when Slovis would need to return by in order to be available against Washington. The Trojans will also stay with the three walk-ons behind Fink — Brandon Perdue, Trevor Scully, and Scott Harris — and Helton said they would put together a package for Perdue in case he is called upon against the Huskies.

As for Washington, the Huskies have had terrific success in defending Washington State’s Air Raid offense, and coming off a big win against BYU, their confidence will be high — especially in the secondary.

Helton said the Washington secondary is a mix of old and new, with a couple of true freshmen in Trent McDuffie and Cameron Williams playing along veterans such as Keith Taylor, Elijah Molden, and Myles Bryant. And they excel in showing a look pre-snap that isn’t there post-snap.

“It’s something that, whatever you see, don’t believe, because the picture is going to change,” Helton said. “They do a nice job of hiding coverages.”

Helton said getting the quarterback to make the correct read post-snap will be “probably the biggest thing” for the USC quarterbacks going into the game.

Helton also said the run game will likely need to do more than it did against Utah. There wasn’t much panic from him when asked about the struggles they had against Utah, as he said they’ve been pleased with the production on the ground in three out of the four games, and he also pointed to their ability to run out the final four minutes with the running game.

“Hopefully going into this fifth game, it’ll pick back up,” Helton said. “This last game we had to throw it a little bit more than we ran it.”

But Helton also pointed to the 7.1-yards per play average the Trojans posted against the Utes, and said he learned from Steve Sarkisian during his time at USC how valuable explosive plays can be, and that hitting 6.5 yards or more per play is “a heck of a night.”

On the other side of the ball, Helton said there are issues with the perimeter run game.

“The biggest thing for me is on the perimeter,” Helton said. “When you look at the interior run game, it’s really being shut down right now…On the perimeter, we have to be better setting the edge and bending it back to the linebackers.”

Helton also said the gameplan from Clancy Pendergast called for some edge pressures to help against that perimeter deficiency.

Cornerback Olaijah Griffin left the Utah game due to back spasms and Helton said there will likely be more of an update on his condition following Tuesday’s practice. But with USC’s top two cornerbacks out (Isaac Taylor-Stuart missed the game due to a concussion), the Trojans secondary performed very well, led by safety Talanoa Hufanga.

“Probably in my 10 years here, I don’t know if I’ve seen a better game by a safety than Talanoa in that game,” Helton said.

Helton also praised cornerbacks Chris Steele, Greg Johnson, and Chase Williams, as well as defensive backs coach Greg Burns for cross training Johnson at nickelback and cornerback, and Williams at nickelback and safety. That gave them the flexibility to push Johnson out wide as a corner when Griffin left the game.

“They secondary, I thought was exceptional and did a really nice job in that game,” Helton said. “And the moving pieces that sometimes we have to have is important for us.”

Now, the Trojans turn their attention to Washington, and another road trip on the heels of a big home win. Helton’s message was similar to what he said after the Stanford win.

“You play one big game, now you have to put that behind you and play another one.”