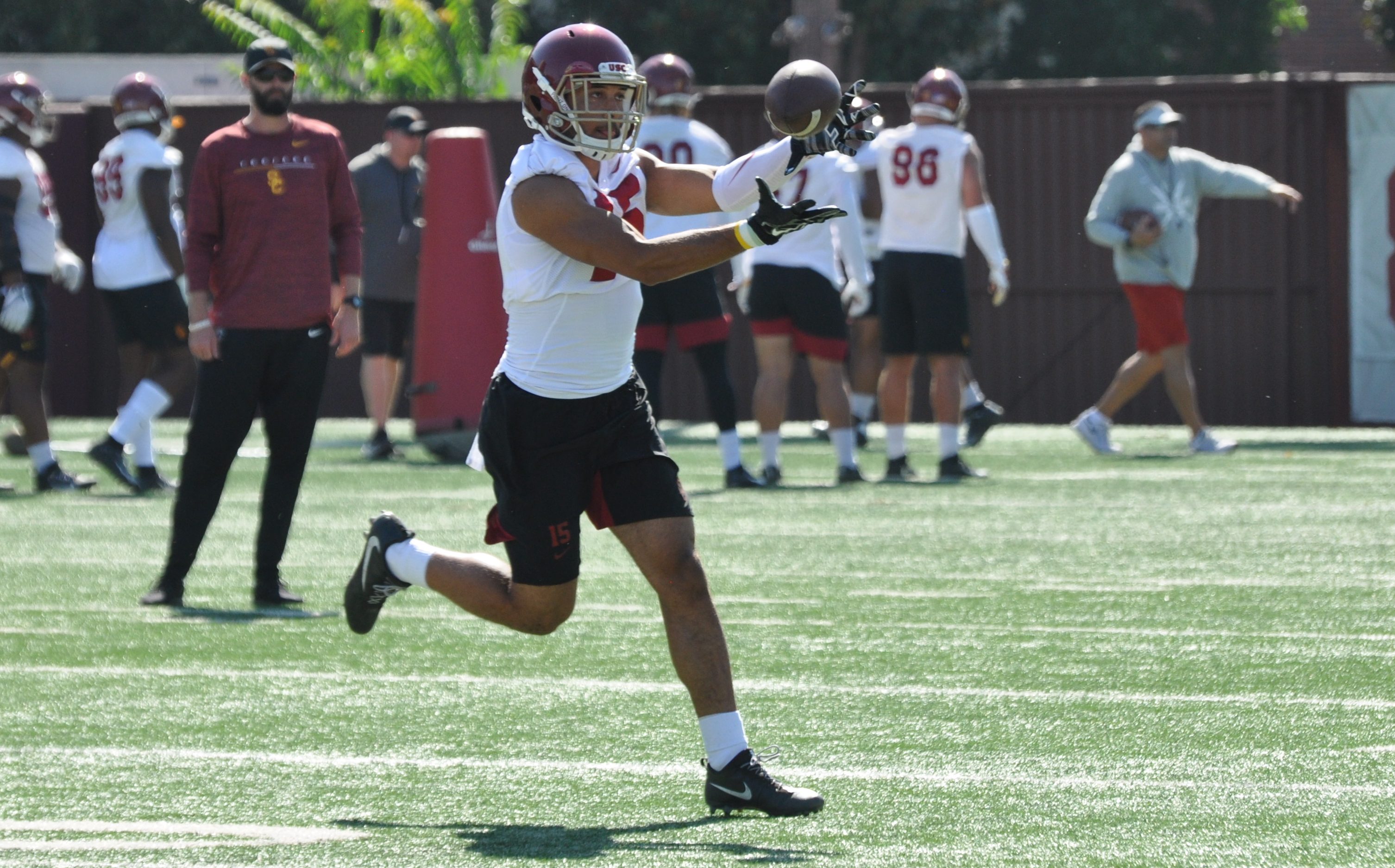 The USC Trojans hit the field in shorts and shells on Thursday afternoon, for the penultimate practice before Saturday’s Fall Showcase in the Los Angeles Memorial Coliseum.

“It’s been a good week, and really looking forward to getting back into the Coliseum over the next two days,” head coach Clay Helton said. “It’s a very important time for us.”

The Trojans will have a closed practice at the Coliseum on Friday night, as they continue to put in nighttime work on United Airlines Field, which is when their first three home games are scheduled. After that, the Trojans will perform in front of a live audience on Saturday, hopeful that USC fans will pack the stadium for their first glimpse at the 2019 team.

“Put the ball down on Saturday and play real, live ball in front of our fans,” Helton said of the Showcase plan. “And really hopefully get some performance anxiety out of the way for a lot of young people, and get a feel for what that feels like to play in front of a lot of folks.”

While all eyes remain on the quarterbacks as they continue to battle without a starter named, one defensive player continues to steal the show, as safety Talanoa Hufanga (photo above) recorded his third interception of the week.

“I don’t ever want to play against the guy,” Helton said of his sophomore safety. “I’m glad he’s on our football team.”

Helton said Hufanga is playing great football right now and called him one of the better safeties in the country. It’s almost always a little blasphemous to start truly comparing young player to bonafide USC legends, but when watching Hufanga play, it’s almost impossible to not see Troy Polamalu. He is constantly playing a step ahead of just about everybody else and he will absolutely hit anything that comes near him. He is just a joy to watch play right now.

Freshman defensive end Drake Jackson sat out practice today. Helton said he had an eye infection that required dilation today, but he should be back tomorrow.

Max Williams continues to do rehab on the side. Helton said he is working back from a hamstring issue and is hopeful that the freshman cornerback will be back on the field next week.

Outside linebacker Hunter Echols continues to miss time with a turf toe, and is day-to-day. Helton said he is close to being back on the field. Linebacker Eli’jah Williams is sitting out with the same injury, though Helton said his is more severe.

Wide receiver Amon-Ra St. Brown sat out with groin and hip tightness. Helton said they were precautionary with the sophomore receiver, and that he will get in some work on Friday to see if he will be available Saturday.

Bru McCoy continues to be away from the practice field. Helton said he is “starting to feel a little bit better” and that he is attending team meetings. Helton said McCoy’s integration back onto the field will be at his pace, and that they understand that it will take some time.

The quarterbacks remained in for a few extra plays on each drive today, as Helton said he wanted to give the entire team more of a sense of what it’s like to run eight to ten plays at a high tempo.

We again saw some shifting along the offensive line, as Drew Richmond began with the first unit at right tackle, with Jalen McKenzie at right guard.

JT Daniels was up first today and his Michael Pittman, Tyler Vaughns, and Drake London with passes, around a sack by Christian Rector.

Kana’i Mauga had a nice series, as he knocked away a Matt Fink pass, and then came back a couple plays later with another knock down, though he was frustrated to not come up with the interception.

Outside linebacker Malik McClain came all the way across the line to wrap up Kenan Christon.

Jack Sears was up first in seven-on-seven and had a chance to hit Erik Krommenhoek for a big play but misfired.

In the team period, the offensive line moved back to Vorhees at right guard with McKenzie at right tackle. Isaac Taylor-Stuart and Chris Steele were the starting cornerbacks.

Slovis tried to hit Michael Pittman downfield, but Steele was in tight coverage and the ball fell incomplete. Steele has been coming on after a bit of a slow start to camp, as he was doing a little too much grabbing and either getting beat or flagged. He’s been working more with the first team lately and seems to be responding, as he had another solid day today.

Cornerback Olaijah Griffin continued his strong play this fall with a pass breakup against Tyler Vaughns on a Daniels throw. Griffin reached in to knock down what looked to be a sure completion.

Matt Fink put a pretty throw on the money to Pittman over coverage from Hufanga for a touchdown.

Brett Neilon put a solid pop on Palaie Gaoteote on a running back, but Gaoteote came right back on the next play, getting into the backfield for a tackle for loss.

Jack Sears put together the biggest play of the day, buying a little time and finding Velus Jones deep down the field for a long touchdown against the second-team defense.

Markese Stepp had a big run behind nice blocks from Dedich and Jimmons.

Hufanga had the biggest defensive play of the day when he read a pass from Daniels and arrived in front of Jackson III to intercept the ball with a full head of steam going the other way. It’s the third time this week that he’s returned an interception for a touchdown.

Slovis put the finishing touches on the day for the offense, hitting Pittman in the endzone for a touchdown.