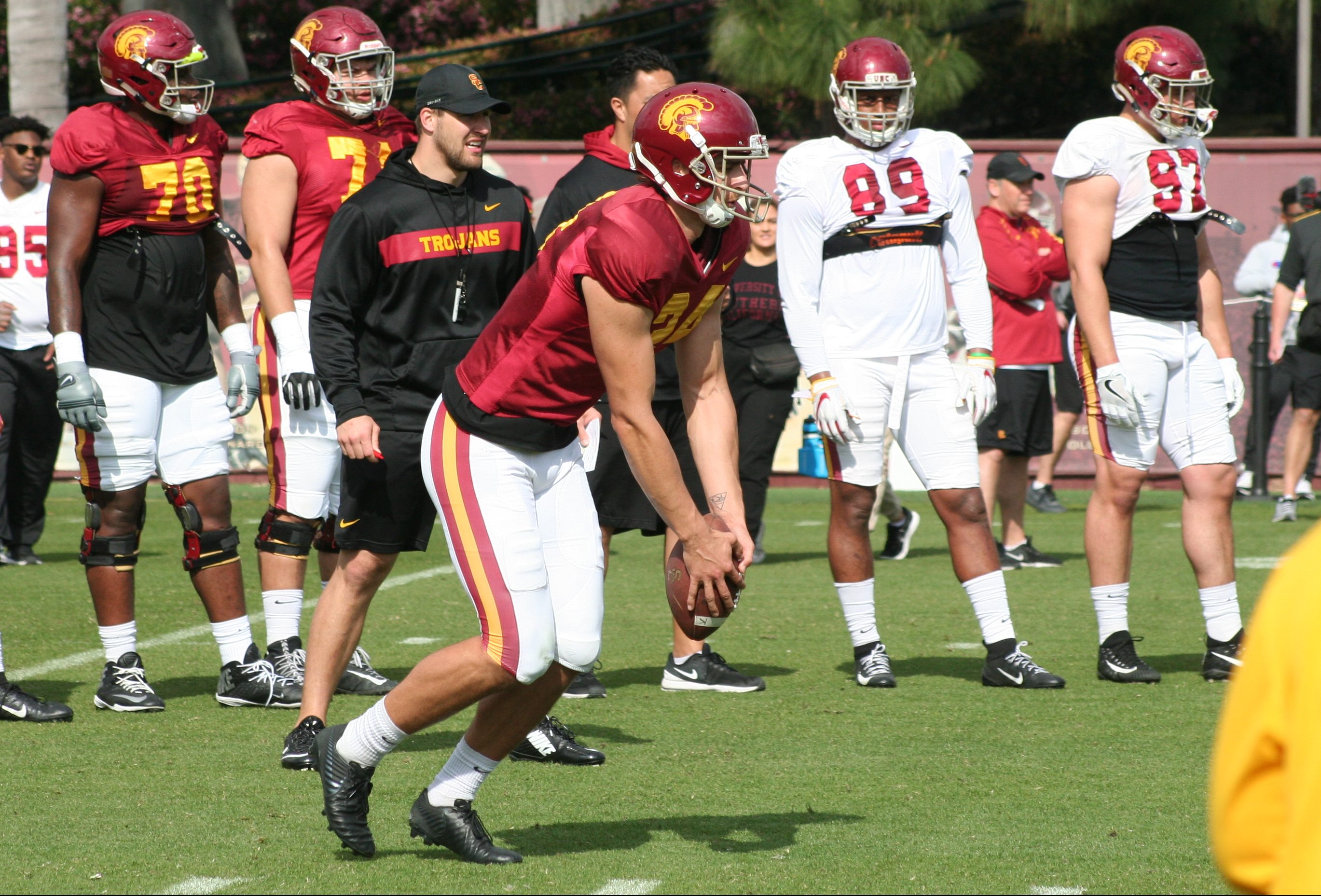 The USC Trojans hit the field for a helmets-only practice on Thursday, as the team took a break from hitting in preparation for Saturday’s scrimmage.

Without pads, today definitely lacked some of the physical intensity that we’d seen from the past few days of padded practices, but the Trojans still got plenty of work in, with good competition between the offense and defense.

Head coach Clay Helton said Saturday will look like a real scrimmage, as the team will go through some individual periods, but then “we are going to put the ball down and play.”

As for the quarterback competition, Helton said they will get equal reps during the Saturday scrimmage and they won’t begin narrowing down the competition until after the public scrimmage on August 17.

Helton is putting a lot of emphasis on team drills and live scrimmage situations in evaluating the position.

“Extremely important,” Helton said of how he looks at those situations. “We factor in everything as we’re breaking down our stats, from one-on-one, to [skeleton], to, really the team periods mean the most to us because that’s when the bullets fly and that’s when pressures come, coverage recognition. It’s very important to see them in those live atmospheres. So both this Saturday and next Saturday are critical for us for evaluation.”

On 12 punts, Griffiths had just one touchback — a punt that landed on the goal line — and gunners downed eight punts inside the 10-yard line. The other three were fair caught by returner Tyler Vaughns inside the 20. Griffiths hasn’t done anything in a game yet, but he is going to be a major asset on special teams this year.

The Trojans were without several defensive backs today, as Max Williams, Talanoa Hufanga, and Isaac Taylor-Stuart all sat out practice. Helton said Taylor-Stuart has a groin issue, but did not provide updates on the other two. Hufanga had his helmet with him and looked ready to be involved throughout.

With the three defensive backs out, the Trojans shuffled the secondary a bit, as Chase Williams went with the first group at safety, while Greg Johnson moved into nickel corner and Chris Steele started opposite Olaijah Griffin. The defensive back group is still really thin in terms of players with experience, but it provided a good look that there are some mix and match options — and also highlighted the importance of getting Steele via transfer.

Even though they didn’t force any turnovers, this was a day won by the defense, though it didn’t look that way at first.

JT Daniels came out with the first team in seven-on-seven and completed six passes in a row, ultimately finding Tyler Vaughns for a touchdown.

Jack Sears then hit two passes before his first incompletion. But he finished his drive with a nice strike high and outside to Devon Williams, where he could make the catch away from the defender. Then Sears scrambled to buy some time and found Vaughns in the endzone.

Matt Fink hit Josh Falo for a touchdown against busted coverage from freshmen defensive backs. Fink then found Velus Jones for a touchdown a few plays later. He tried for a third score, but Kana’i Mauga made a nice play to bat the ball away at the goal line.

During 11-on-11, JT Daniels looked for Vaughns deep and Steele got back to make a nice pass breakup. It was an overall good day for Steele, as he nearly had an interception on a Fink pass a few plays later, and also broke up what looked like a sure reception for Vaughns on a ball from Daniels.

Christian Rector and Mauga both had sacks as it looked like the defense was turning up the pressure on a few occasions.

Olaijah Griffin almost had another interception as Daniels looked for Devon Williams down the sideline but Griffin got up to get a hand on it.

There wasn’t much sign of the running game without pads today, but Drake Jackson was ready when it was called, grabbing the back for a tackle for loss.