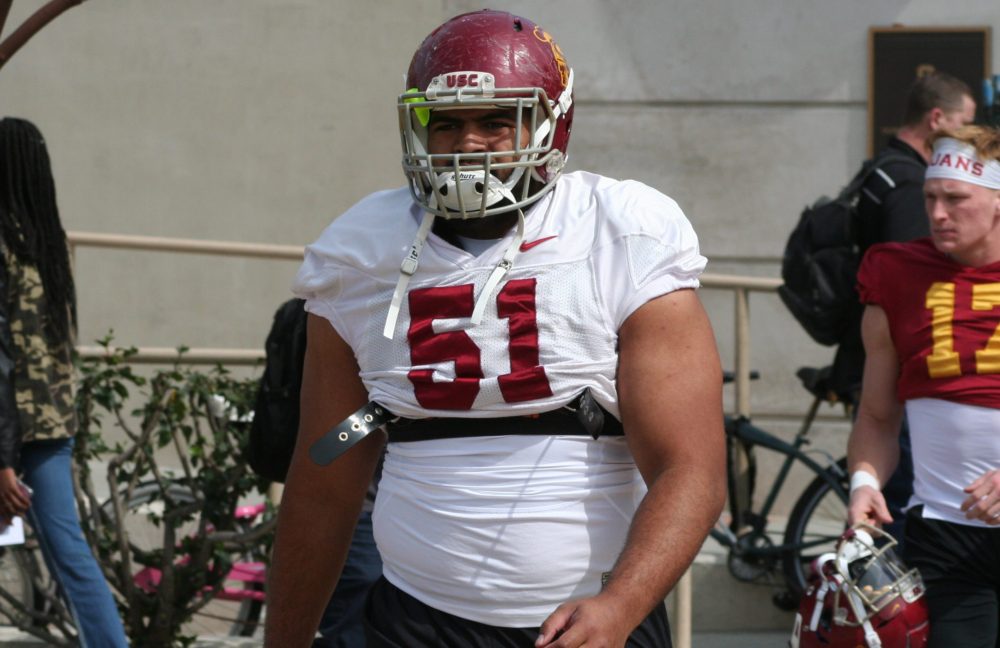 The eighth practice of spring ball for the USC Trojans featured full pads, some serious intensity from the coaches, and a nice step forward for the offensive line.

The Trojans were in full pads today, and went with live tackling for portions of practice. There were no major collisions, but there was a nice physicality to the day overall.

Once again, the team got plenty of special teams work, and Thursday offered another look at punter Ben Griffiths, who has been outstanding. During warmups, there was a snap from the 27-yard line and his punt looked to have landed on the out of bounds line around or inside the 10-yard line.

There was also an extended competitive period focused on covering and returning kicks.

There was a blitz pick up drill between the linebackers and running backs that had pads popping. Vavae Malepeai had a few really nice reps, starting with the first one against Jordan Iosefa. Palaie Gaoteote hit Stephen Carr hard enough that Carr was thrown back a bit, then John Houston made a nice move to get around Carr. It wasn’t all losses for Carr though, as he came back and did have some solid reps.

There have been a couple of tweaks during 1-on-1 and 7-on-7 periods that I’ve found interesting and certainly beneficial. During 1-on-1s, the quarterback is always given the option to abandon the play and dump the ball off to a receiver along the line of scrimmage. This makes 1-on-1 interceptions more interesting to track now, as the quarterback can make a decision of whether or not to try forcing a pass. Also, there were three blocking pads used during 7-on-7 drills today, held up by equipment managers standing where the left tackle, center, and right tackle would be. It certainly cuts some windows down and makes life tougher for the quarterbacks in that drill.

Coaches were definitely fired up today, as there was plenty of aggressive motivating going on.

Gaoteote got things started during run drills with a big pop on Carr in the hole. Carr came back later and had a nice run up the middle, as he continues to return to form this spring.

Markese Stepp got outside for a long gain, and Vavae Malepeai continued the big plays for the offense, as he got loose for a long run.

JT Daniels and Michael Pittman connected on the most impressive play of 1-on-1s as Daniels lofted a perfect deep ball that landed in the arms of Pittman, who made an over-the-shoulder catch against good coverage from Taylor-Stuart.

Taylor-Stuart came back later and recorded an impressive deflection against another well-thrown ball intended for Pittman in the back of the endzone.

Matt Fink had another nice day at quarterback, following up his strong showing on Tuesday. He hit Pittman and Devon Williams for touchdowns during 1-on-1s.

During the first team session with live tackling, Malepeai got things going by breaking off a huge run that wound up down the left sideline.

Marlon Tuipulotu quickly answered that with a hard tackle for loss.

Kedon Slovis had a nice day throwing the ball today. His biggest play was where he bought a little time and found Tyler Vaughns deep downfield, as Vaughns had gotten behind everybody.

Hunter Echols made a nice play in chasing down a running back from the back side and tackling him for little gain.

Walk on cornerback Jack Drake also made a nice play to knock a well-thrown deep ball from Daniels away from Williams.

During another team session, Fink lofted a beautiful deep ball that hit Amon-Ra St. Brown perfectly in stride for a long touchdown. He also made a nice read to find Tyler Vaughns quickly against pressure.

Malepeai had another nice run for what might have gone for a touchdown. And Kana’i Mauga made a nice tackle for loss when he quickly shot the gap and got into the backfield.

The offensive line dominated the early 1-on-1s against the defensive line, but Jay Tufele and Tuipulotu changed that in a hurry, when they simply tossed their offensive linemen into the backfield on their reps.

John Houston made a couple nice plays toward the end of practice, as he met Stepp at the goal line on a run and was able to keep him out of the endzone. He also brought down Quincy Jountti on a run.

Carr helped the offense convert a first down during a drill where the offense was trying to run out the clock. Carr took two handoffs and turned the corner on the first, then weaved his way through traffic to pick up a few yards on the second.