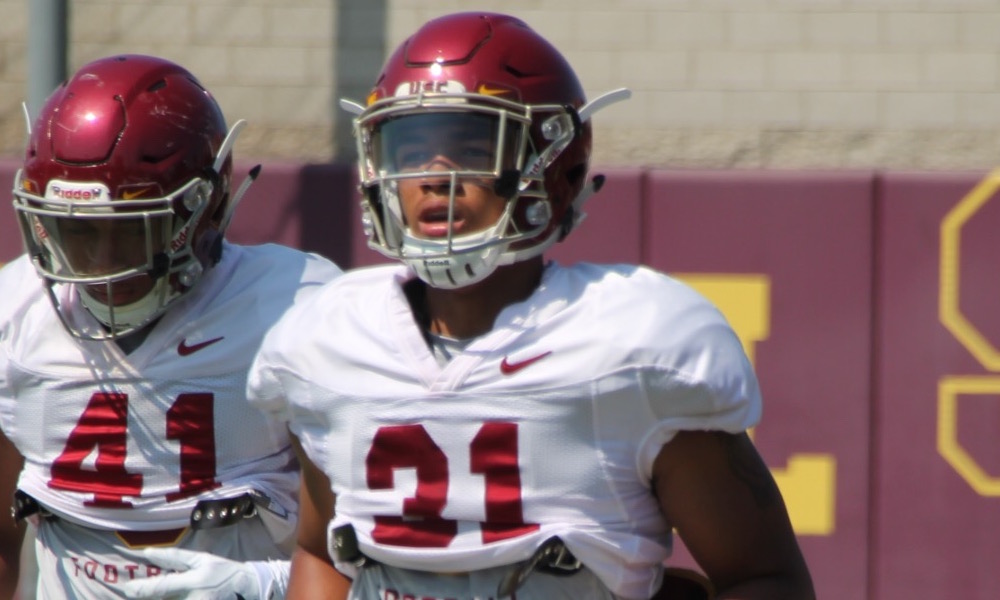 “We’re in a 5 DB set 85% of the time but there are teams we face with a run-first style so today was a good look for us,” Clay Helton said.

The 2-deep defensive front was as follows:

Gustin, Rector, Pili, Dorton, Mauga (Jordan Iosefa was out today after having a root canal procedure)

Clay Helton said the Trojans will scrimmage with live tackling on Saturday and he wanted to remind all fans that the practice is open. He also wanted to promote the USC coaching clinic this weekend with guest coaching speaking such as David Shaw and Jeff Tedford, and he said the clinic isn’t just for coaches but for fans who want to learn more about the game as well.

There was a live drill on Brian Kennedy Field and here was a script of the plays that were run:

* Aca’Cedric Ware off tackle, Cameron Smith for no gain

* Matt Fink throws deep for Trevon Sidney in end zone, gets one hand on it but can’t bring it in

* Malepeai run up the middle for 3

* Malepeai breaks into secondary for long gain, best run of the drill

* Ware run, Liam Jimmons for the tackle, no gain

Other highlight plays on the day included:

* Fink to Velus Jones for a deep touchdown against Ajene Harris

* Cameron Smith made a ton of stops in the final team drill, he was all over the place.

Among the guests in attendance were Hayes Pullard, JT Daniels, Sean Dollars and Jonah Taunau’u.

Isaiah Pola-Mao: To see his movement at 6-3 has us excited to see what he can do when healthy

CJ Pollard: Gets people lined up like Chris Hawkins

Talanoa Hufanga: Made two instinctual plays today that stood out

Helton on who is standing out among reserve linemen

“I mentioned the two centers the other day, both Brett Neilon and Justin Dedich have played well. Alijah Vera-Tucker gave us great looks last fall on service team and he’s doing well this spring. He and Jalen McKenzie have jumped out to me.”

On how Clancy uses Christian Rector

“Christian is really good on the outside on passing downs when were facing dropback passers but against mobile quarterbacks we saw Clancy using Jordan Iosefa, and now we have Porter back. It’s two different packages based on the QB we face.”

“There’s no question in my mind about him after watching his mind and creativity at work. Being young doesn’t mean you aren’t good, ask Sean McVay about that.”