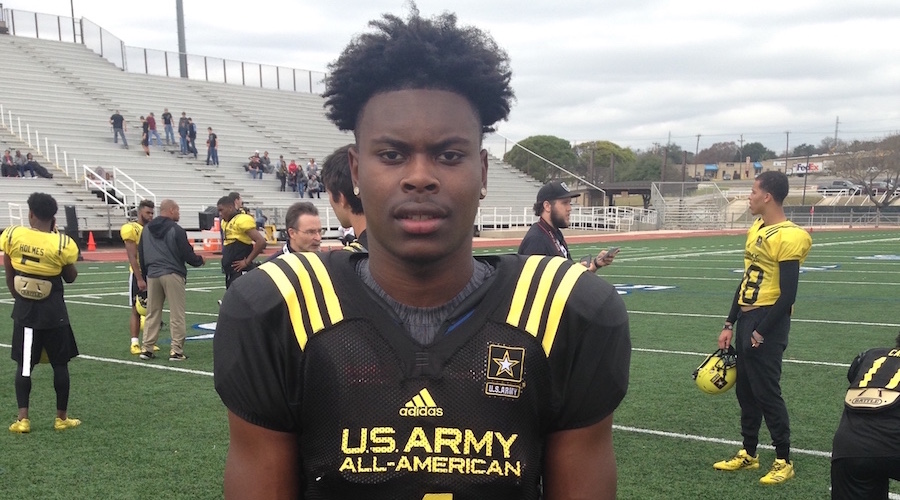 USC-related news items coming out of the West team’s Thursday practice session for the U.S. Army All American Bowl in San Antonio, Texas.

South Jordan (Utah) Bingham defensive tackle Jay Tufele was arguably the top performer along the interior defensive line on Thursday. Showcasing a non-stop motor, he made at least two tackles-for-loss during the 11-on-11 period.

On the recruiting front Tufele has remaining official visits lined up with USC (Jan. 13), BYU (Jan. 20) and Utah (Jan. 27). Those three programs in addition to Michigan and Ohio State currently comprise his top 5, and he claims no leaders from the group.

Targetted to line up either at nose tackle or the three-technique defensive tackle spot by the Trojans, Tufele says that his interest in USC is definitely genuine.

“I’ve taken two unofficial visits there, and I fell in love with everything about USC – their campus, the school and everything like that,” Tufele said. “And also with Coach KU [Kenechi Udeze], he’s an amazing coach. He’s always been there. Even when the old staff left, he was still there, so I really appreciate Coach KU.”

Across the line, Austin Jackson, who is normally a tackle, lined up primarily at left guard on Thursday, in addition to tight end in certain sets where he was essentially an extra tackle

The Phoenix (Ariz.) North Canyon standout is down to a final three of Arizona State, USC and Washington. All three of those schools are even according to Jackson. He definitely thinks highly of the Trojans, however, due in large part to what the university has to offer in the classroom.

“Academically the resources that are available to me as a student-athlete are ridiculous,” Jackson said. “I’m looking to go into law, and study political science or criminal justice…something in that avenue. It just presents me with so many opportunities there I can’t go wrong.”

Jackson, who is being pursued as a tackle by the Trojans, said that he is in near-constant communication with the USC staff, led by Offensive Line Coach Neil Callaway.

He also got a chance to watch USC’s Rose Bowl victory over Penn State on Monday, and it left a lasting a impression.

“That was a reflection of their season,” Jackson said. “They started off strong, then fell behind, but they never looked out of it. Even when they got down by 14 points, guys weren’t sitting on the sideline pouting. Not at all, and they finished the job.”

Jackson plans to announce his decision sometime later this month.

Throughout much of the process USC didn’t appear to be much of a player in the race for Los Angeles (Calif.) Hawkins star receiver Joseph Lewis, but it’s safe to say that the situation has changed in a major way.

“My top two are USC and Nebraska,” Lewis said, “and I will be taking my official to Arizona State on the 13th, and I’m going to USC on the 27th.”

So what has propelled USC into a potential landing spot for Lewis?

“I would have to say it’s the coaches and the players, and the family atmosphere they have over there,” Lewis said. “It’s also close to home, so if I were to have any family problems or anything like that, it’s only five minutes away.”

Lewis originally wasn’t expected to participate in the U.S. Army All-American Bowl due to a late-season ankle injury, but he’s been practicing each day, and he definitely appeared to be close to 100 percent on Thursday, making a beautiful leaping grab along the sideline at one point.

Lewis will announce his decision on Signing Day.

USC also in play for Johnson

Another player set to take an official visit to USC on the weekend of Jan. 27 is Lewis’ high school teammate at Hawkins, cornerback Greg Johnson, a one-time Arizona commit who opened things back up in December.

Johnson has been lining up at safety throughout this week in San Antonio, but he is being recruited to fill multiple roles for the Trojans.

“They’re recruiting me to play corner, safety, nickel and some slot on offense,” Johnson said. “That would be special to have that opportunity.”

Repeating what he has stated before, Johnson noted that the fact that his younger brother, Class of 2018 athlete Marcus Johnson, recently verbally committed to USC will not have an impact on his decision.

“Not really, because at the end of the day he has a whole year left,” Johnson said. “He’s firm with his commitment right now, but things could change in the long run. That’s how this whole thing is. It’s a business. For me, I feel like I’m going to take this whole thing slow and break everything down piece-by-piece.”

In addition to USC, Johnson will visit Arizona State on the weekend of Jan. 13, and he will also fit a mid-week visit to Cal in at some point later this month. Like Lewis, he plans to announce his decision on Signing Day.

Lenoir getting worked on by USC commits

Los Angeles (Calif.) Salesian’s Deommodore Lenoir is another talented cornerback who is now considering the Trojans after having re-opened his recruitment. The one-time Oregon pledge has been hearing plenty about USC this week from some current Trojans commits.

“Everybody’s recruiting me for USC…Hunter [Echols], Stephen [Carr],” Lenoir said. “It would be cool to go to school with them.”

In fact, Lenoir has built up such a strong friendship with Echols and Carr that he’s now considering swapping his mid-week (Jan.16) USC visit with his weekend trip to Nebraska (Jan. 20) so that they can all be on campus at the same time – although that is anything but set in stone.

One more factor working in USC’s favor when it comes to Lenoir is proximity to home.

“I forget where I was, but I was on an unofficial visit somewhere, and then I heard some players talking and one of them said, ‘I wish my mom was here to see me play,’ Lenoir said. “It made me think, my mom wouldn’t be able to see me play all the time, and I know she would want to see me play college football.”

In addition to USC, Lenoir will visit North Carolina on the weekend of Jan. 13. Oregon and UCLA are also under consideration, and he’s another player who will announce on Signing Day.

– Carr had a strong day, showing off not only his skills as a rusher and pass-catcher, but also as a blocker. He did a nice job of picking up a pass-rushing defensive end on one play, before making a fantastic block downfield on another to spring Tate Martell for a big gain.

The talented tailback remains committed to USC, but he does have an official visit to Oregon lined up for later this month, and he’s also still considering UCLA.

“I’m just making sure I made the right decision,” Carr said, “because you never know.”

– Safety Bubba Bolden (Las Vegas, Nev./Bishop Gorman) is still scheduled to announce his decision on Saturday, choosing between USC and Ohio State. He spent the entire day running with the No. 1 defense.

– Scottsdale (Ariz.) Saguaro safety K.J. Jarrell also had a very solid day lining up at safety, coming up with a nice interception on a deep pass over the middle by Dylan McCaffrey during a final 11-on-11 period. Jarrell has official visits lined up this month with USC (Jan. 13), ASU (Jan. 20) and Cal (Jan. 27).

– USC commit Brett Neilon (Rancho Santa Margarita, Calif./Santa Margarita Catholic) had a very good day at the center position. He’s been running exclusively with the No. 1 unit this week.

– The U.S. Army All-American Bowl will take place this Saturday at 10 a.m. (PST), and it will be televised by NBC.