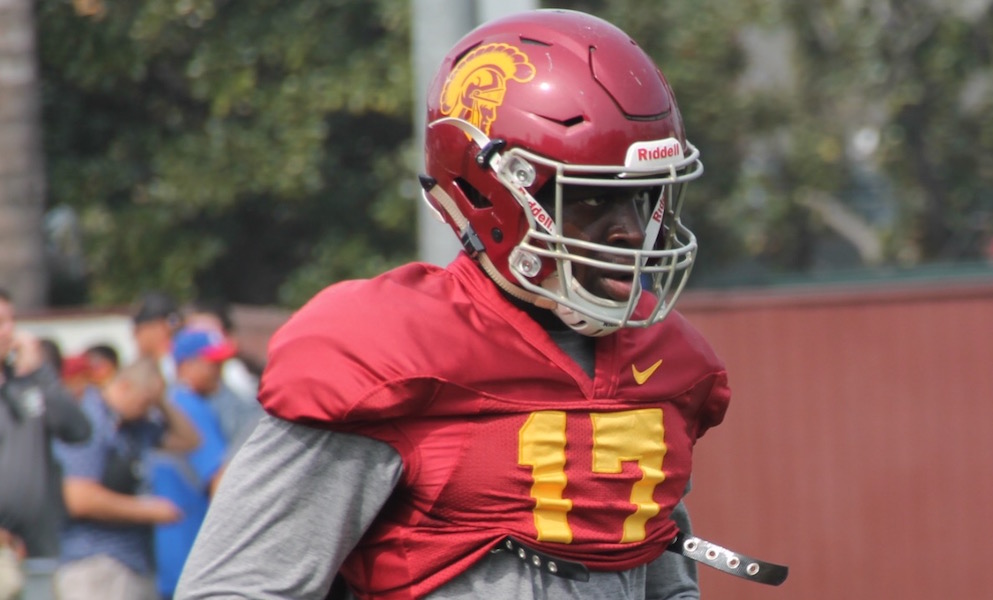 After the Saturday scrimmage Clay Helton gave a status report on where he thought the Trojans were to this point in spring ball. Here’s our thoughts on each of the points he made:

I expected the defense to be good but not this good. They are playing fast and there are a lot of guys out there which should mean more rotating. And as Helton has mentioned many times, the fact that Clancy Pendergast is entering his third year as coordinator means the system has been in place and the players know it, and we’re seeing that in their communication on the field. New defensive assistant coach Joe DeForest (who has over 20 years experience as a coach) said he’s never seen a group help each other more. I like how strong we look up front. Brandon Pili has taken that step up and Marlon Tuipulotu should join him in fall, and Jay Tufele is there now. Add impressive JC transfer Caleb Tremblay and veterans Christian Rector and Malik Dorton and you’ve got a good group.

Glad to hear him say that but it’s hard to know for sure how the line is progressing until the season starts. I like the four projected starters with Toa joining them in the fall. I like what we’ve seen from Alijah Vera-Tucker and Helton has heaped a lot of praise on the two centers filling in for Toa, hopefully that is leading to some good depth.

Aca’Cedric Ware has been one of the more consistently productive players on the field and that’s been great for the senior. Vavae Malepeai hasn’t been out there a lot as he nurses a hamstring but when he’s out there he is running strong. So if those two physical runners are healthy, and if projected starter Stephen Carr is ready to go then it will be a good trio to throw out there (not to mention incoming 225-pound runner Markese Stepp). The good news is that any of the three can be a lead back at any given time and all are good pass catchers too.

4. The development of our wideouts is going to be important, we’ve got two established guys in Pittman and Vaughns and we really need that next group to grow up.

It was the same thing last year as we knew we had Deontay, Steven Mitchell and others as veterans but weren’t sure what to expect from Vaughns and Pittman (and they eventually came along). Now Tyler and Michael are the experienced ones and we’re waiting for someone like Josh Imatorbhebhe, Randal Grimes or Trevon Sidney to step up into bigger roles. Imatorbhebhe has probably made the biggest move but there is still a ways to go here.

5. “And obviously we need to progress our quarterbacks as fast as humanly possible.”

That’s as close to a critical comment as you’re going to get from Helton and it sums up where things stand right now. There have been moments for each quarterback this spring where they have made good plays, good reads, etc but neither guy has stepped forward to show that they are ready to claim the starting job, and that’s what Helton needs to start seeing. He’s already said he won’t name a starter at the end of spring (and that leaves the competition open through fall camp when JT Daniels arrives) so this spring is the chance for Fink and/or Sears to get a leg up and so far that hasn’t happened.