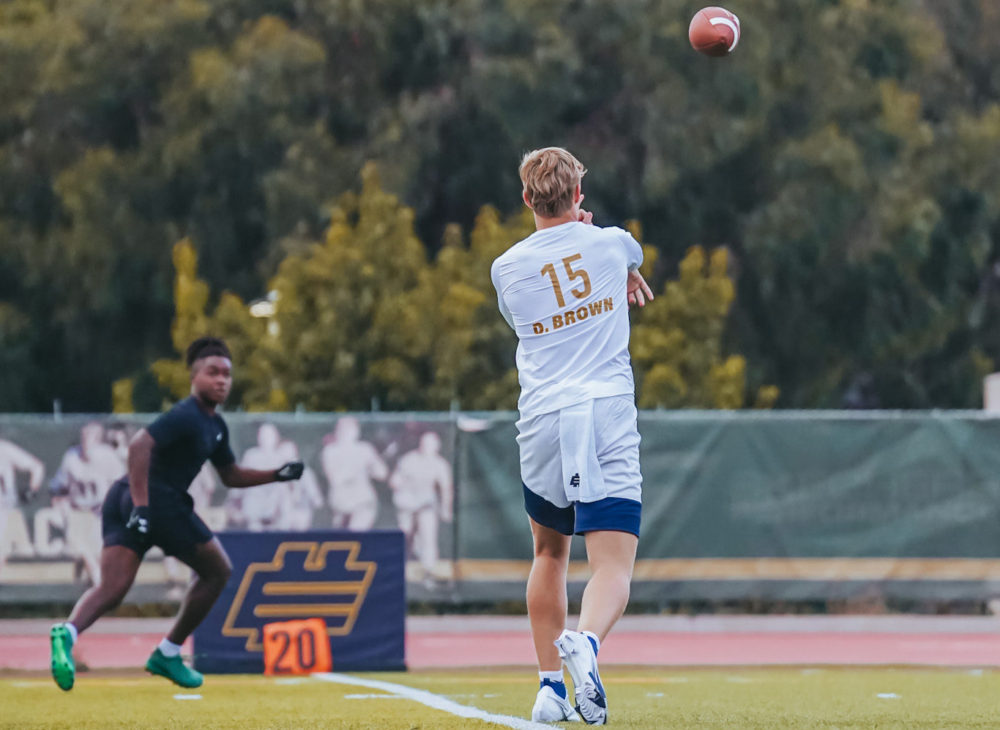 The Elite 11 was back in action on Wednesday night, with 20 of the nation’s top quarterbacks on the Mira Costa High School campus for an event that is equal parts fun and competitive.

USC commit Devin Brown (Draper, Utah/Corner Canyon) was one of the participants and the four-star signal-caller had a chance to measure himself against some of the top quarterbacks in the country, including the top four overall and eight of the top 10.

It was a very good first night for Brown, who absolutely looks like he belongs at the event mixed in with those top prospects.

The first thing that jumps out about Brown at an event like this is his athleticism. He plays basketball as well and he brings that bounce and springy energy to the football field. He has a good frame and is very much his listed 6-foot-3, 189 pounds, with room to fill out still.

It was only the first day of the event so things never got too complicated. The quarterbacks were broken into four groups and rotated through four stations, throwing passes to high school receivers without anybody in coverage. Brown and his fellow quarterbacks were asked to make a number of different throws and there weren’t any where he was lacking. He has one of the stronger arms at the event and he was very accurate and powerful throwing on the run.

Because there weren’t any defenders involved, it’ll be interesting to watch his touch passes later in the week if he’s asked to throw over, around or between defenders. But the straight-line throw is there and the ball pops off his hand.

The night ended with the rail-shot competition, where the quarterbacks take turns making a throw down the sideline to beat Cover 2 (the throw Tua Tagovailoa made to beat Georgia in the national championship), leading the receiver and putting enough air to get it over the sinking cornerback and on a line enough to beat the safety coming from the inside. Devin Brown was one of about half the quarterbacks to make it through to the second round following a good first throw, but then got knocked out when his second throw wasn’t quite out in front of the receiver enough.

Overall, it was a strong first day for Brown, who acquitted himself well as part of a loaded group of quarterbacks.

Some additional notes on the other participants:

Quinn Ewers (Southlake, Tex./Carroll) is on a different level compared to the rest of the group and there is absolutely no doubting why he’s the No. 1 prospect in the country. He didn’t have his best day on Wednesday, but his throwing ability is unmatched with the combination of velocity and accuracy he possesses. He’s also tremendously athletic and can make throws from so many arm angles with his body in just about any position.